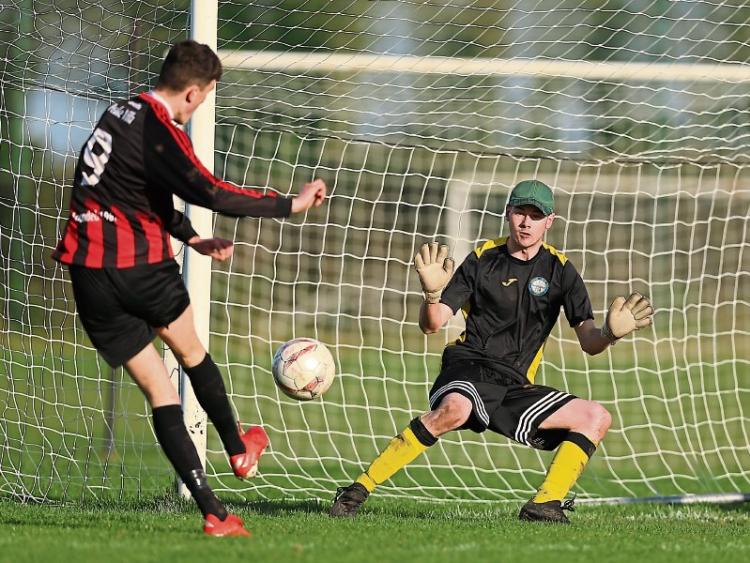 On form striker Ronan McGuire, Peake Villa, knows where the goal is.

The destination of the Clonmel Credit Union Premier League could well be decided on this Wednesday night at the Tower Field in Thurles, when Peake Villa will host reiging champions St Michael’s.

Currently the Thurles Town side top the league and will be hoping that home advantage might give them the opportunitiy to stretch that lead against the Saints.

One man in a hot streak of form at the moment is Peake Villa striker Ronan McGuire who in the past week has scored two hat-tricks, one in the midweek 4-1 win over Two-Mile-Borris and again at the weekend in the 4-2 away win at Bansha Celtic.

Goals won’t be as easy to come by against a mean St Michael’s defence on Wednesday night.

Here are the reports of recent Peake Villa games…

It was a welcome return to the Tower Grounds after a long awaited Covid break for Peake Villa who were hosts to local rivals Two Mile Borris, in a game that had implications at both the top and bottom of the  table.

It was a perfect summer’s evening for football and the home grounds were in immaculate condition, with the Villa quick out of the traps and two goals up inside the first 15 minutes.

The opener was scored by goal machine Ronan McGuire who was on hand after a Mikey Wade free-kick came back off the crossbar, and Keith Cahill got the second with a fine finish from just inside the box.

Borris were struggling at this stage, but against the run of play were given a lifeline, after a cross in to the home goal area was adjudged to have come off a defender’s hand, and the resultant penalty was fired to the net.

The home side were also down to ten men after the incident so had to dig deep for the rest of the first half to make sure they didn’t give up their winning advantage.

Once the second half started the home side re-organised and it often felt that they were the team with the extra player.

Ten minutes in, a fine move down the left resulted with a pin point cross by Frank Mc Kevitt, who found Ronan McGuire and he made no mistake from less than six yards out. Not long after, another soaring run from Dale Loughnane saw him set up McGuire was waiting to make it four goals to one, and to complete his hat trick, and secure the points for his side.

Thurle side Peake Villa went in to the lion’s den in Bansha on Saturday night  last and came away with three valuable points that keeps  their quest for league honours alive as the season comes to a climax. In an exciting game that produced plenty of excitement and six goals for the  supporters Villa didn’t have it all their own way.

The visitors got off to a flyer with a tremendous strike into the top right-hand corner from in-form striker Ronan Maguire after just five minutes, but within the next ten, the home side turned the tie on its head when they hit back with two quickfire goals of their own.

The first was a quick move down the left hand which was squared back to Daire Egan to score well from outside the box, and the lead goal arrived minutes later when a corner kick wasn’t cleared away and ricocheted off Darren McGrath into the net.

Chasing the title, Villa piled on the pressure and Davy Bourke was unlucky when his  shot came back off the crossbar on the half hour mark, before they finally equalised when deadly duo Dale Loughnane and Ronan Maguire combined for Maguire to score his fifth goal in four days.

Ten minutes into the second half, the visitor’s retook the lead when Keith Cahill received a great pass from Adam Garret and curled in a beautiful shot to the bottom left hand corner.

Villa’s fitness was starting to pay dividends plus the introduction of Pippy Carroll after a troublesome injury had Bansha on the backfoot throughout the half, and it wasn’t a surprised when Ronan Maguire got his second hat trick in consecutive games finishing a beautifully weighted pass from Keith Cahill.

With the three points secured it’s now on to Wednesday evening’s home game against St. Michael's, which could very well turn out to be a decider and this game will have served as a very good warm up for that main event tie.