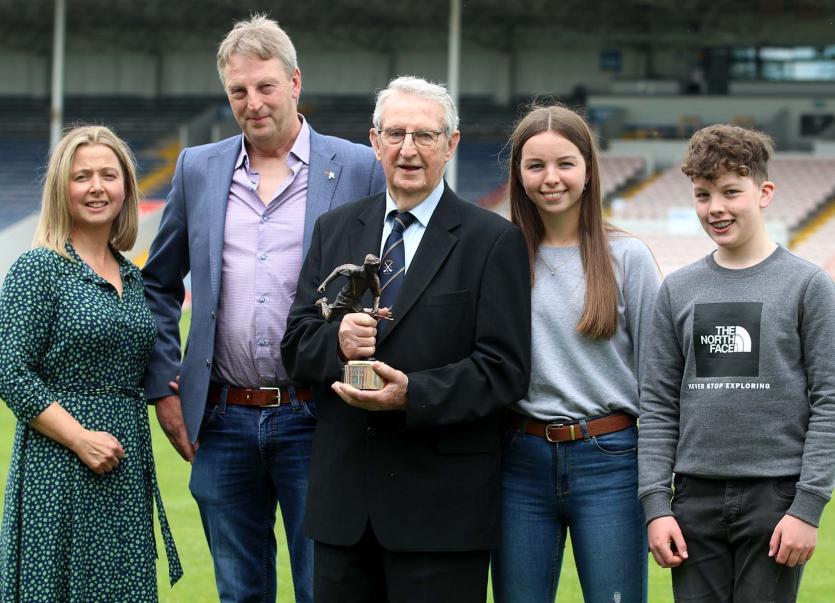 The Tipperary Association Dublin annual awards for 2019 were presented recently in Thurles.
Due to the pandemic the Person of the Year and Hall of Fame Awards function could not be held in 2020 as normal or to date in 2021.

Speaking at the presentation, the President, Liam Myles, stated that the Association was delighted to make the awards – especially after the “lost” year that was 2020. The Association held a number of virtual events over the past year, but it was great to do this in near normal fashion.

“I wish to thank the three recipients for their understanding, patience and cooperation in respect of this even. Thanks also to the County GAA Board and Semple Stadium for facilitating the Association for the event”.

For the first time since the Awards commenced in 1981, the Person of the Year award for 2019 goes jointly to well-known Tipperary senior hurlers Seamus Callanan (Drom & Inch) and Brendan Maher (Borris-Ileigh). This award is sponsored by Louis Fitzgerald of the Louis Fitzgerald Group “for which we are most grateful”, Mr. Myles stated.

Borris-Ileigh will be honoured on the double when Jimmy Finn, one of the club’s greats and one of Tipperary’s finest hurlers from the past will be inducted into the Hall of Fame.
The Palace Bar, Dublin which is owned and run by the Aherne family sponsor this award.
The award trophies are unique one offs and are designed and sculptured by well-known artist, Tipperary town native, Jarlath Daly.

Person of the Year 2019
Myles explained that when the nominations for 2019 were received there were two clear and outstanding candidates – Seamus Callanan and Brendan Maher. So outstanding in fact, that the Association decided they could not be separated!!

He holds a number of senior Mid-Tipperary Championship medals with Drom & Inch going on to win the county title in 2011.

He won an All-Ireland medal at minor level in 2006 and in 2008 was a member of the Munster championship winning Tipperary team at under 21 level. One of the highest goal scorers of all time, he scored a goal for Tipperary in every game of the 2019 championship - a historic and unique record. He holds the record of scoring most championship goals (35) for Tipperary.

Apart from his scoring record, 2019 was a special year for Seamus Callanan. As captain of the senior hurlers, he led from the front culminating in a fantastic All-Ireland win.
He was selected on the All-Star team of the year – his fourth in all. Nominated four times as hurler of the year he deservedly was chosen as Hurler of the Year for 2019.

Seamus was awarded several other national and local honours for his exploits in 2019 – voted Hurler of the Year by Supporters Club members, the Annerville Award and Daily Star Hurler of the Year.
Brendan Maher of Borris-Ileigh has, like Seamus Callanan, starred for many years for Tipperary, captaining Tipperary to senior All-Ireland glory in 2016, having previously captaining the minor team to All-Ireland success in 2007. He sustained a career threatening knee injury in the summer of 2018 but he came back in 2019 to play a leading role in Tipperary winning the All Ireland.

He was chosen by Liam Sheedy to “man mark” the best forward the opposition had in every match and willingly applied himself to this responsible role in which he made a hugely significant contribution to our success in 2019. His contribution was recognised with him winning his third All Star at the end of the year.

To go along with his performances for Tipp, he has starred for Borris-Ileigh in helping them to win the Dan Breen after a lapse of 33 years. He followed this up with superb performances in the Munster club campaign.

He gave a man of the match display in the Munster Club final and starred again in the All-Ireland semi-final victory over the Galway champions, St. Thomas’s. While Borris lost out in the final, he lit up the games with some phenomenal and outstanding deeds which thrilled the followers of the game of hurling everywhere.

Citation – Hall of Fame
In June 1959 the career of one of Tipperary's greatest hurlers came to an end.
Jimmy Finn was aged 28 and in his prime when an accidental blow to the eye in a North Championship match in Nenagh ended his career.

Hurling was always part of Jimmy's life growing up in Borris-Ileigh but his skills were honed when he attended Thurles CBS and progressed to the Tipperary minors in 1948. The following year he was centre back on the successful Tipp minor team on the same day that the seniors won the first of their three Senior All Ireland titles.

A year later, in 1950, he was selected at right half back on the senior side to mark the great Jimmy Langton of Kilkenny as Tipperary retained the title and the following year 1951 at 19 years of age, he captained Tipp to another All-Ireland success. Surely the youngest captain of an All-Ireland winning hurling team.

Jimmy won another All-Ireland medal in in 1958 and but for that unfortunate accident would have been part of the great Tipp team of the early 60's.

Widely regarded as one of the finest hurlers of all time he was always a very strong contender for to be part of great “dream” team being debated or proposed in hurling circles and by hurling people. However, his crowning legacy came when he was selected at right half back on the Hurling Team of The Century in the GAA's Centenary 1984.

Jimmy was given a Lifetime Achievement Award by the GPA in 2015 for his contribution to hurling. He is also the last surviving member of the famous three-in-row Tipperary team of 1949 - 1951.
Jimmy Finn is most assuredly deserving to be inducted into the Tipperary Hall of Fame for 2019.