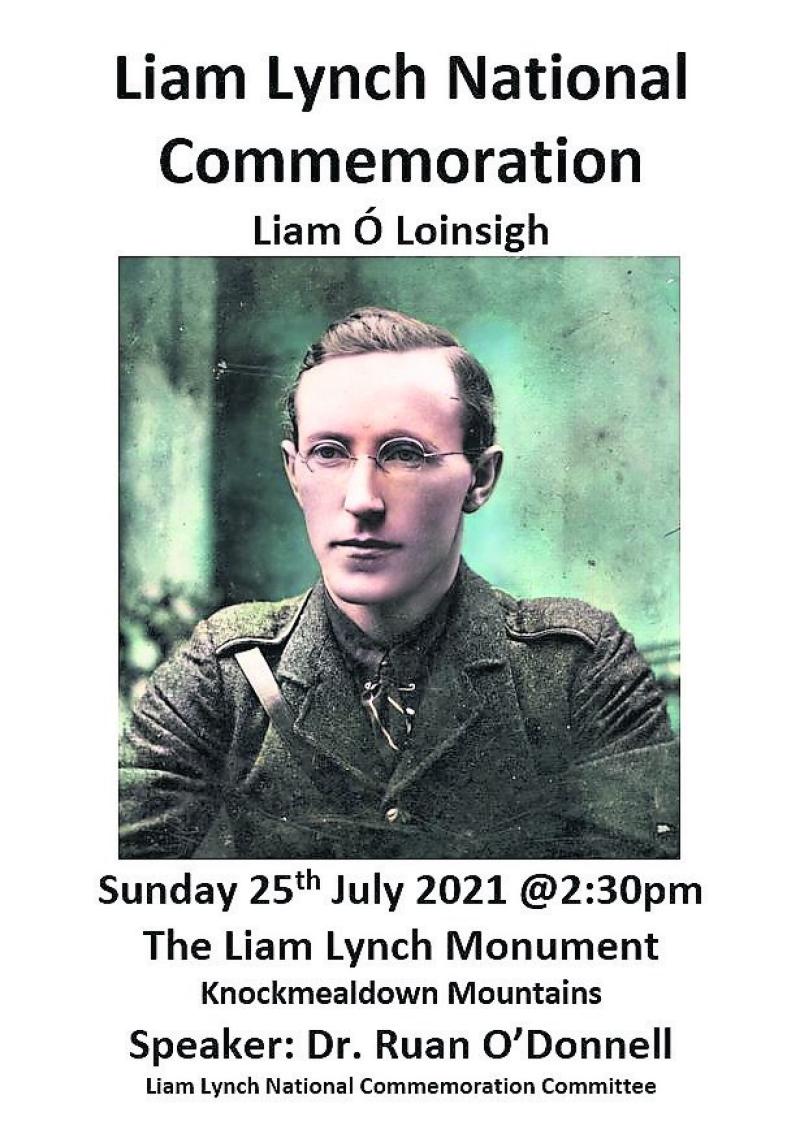 On Sunday July 25 at 2:30 pm, people from all political persuasions and none will gather at the Liam Lynch Monument on the slopes of the Knockmealdowns to remember the great General Liam Lynch.
The oration will be delivered by noted historian Dr. Ruan O’Donnell.

The commemoration is always a special one with its dignified format and the calibre of speakers over the years sets an example of how we should best remember the troubled Civil War period.

Liam Lynch is man who is often painted as a diehard and uncompromising Republican. The truth is, as ever, far more complicated than that.

Liam Lynch was born in November 1893 in Barnagurraha, Co. Limerick in the shade of the Galtee mountains and a short distance from both counties Cork and Tipperary.

Steeped in the tales of his home place with its noble tradition of refuge for the fugitive, it was no wonder that when he moved to Mitchelstown aged 17 to work at O’Neill’s Hardware he joined the Gaelic League and later the volunteers.

By 1916 Liam had moved to Fermoy and, like many of his comrades, the events of Easter week had a profound impact on his outlook. He witnessed the Kent brothers, wounded and bleeding being dragged across Fermoy bridge by the RIC after the spirited defence of their home at Bawnard. For Liam there was to be no turning back.

From 1917, Liam was at the forefront of the cause of Irish freedom. His meteoric rise through the ranks of North Cork IRA testifies to his military abilities. He was elected Commandant of Cork No. 2 Brigade in 1919. An active and brave officer who led from the front, he finished the Tan War leading the 1st Southern Division.

At the signing of the Treaty Liam worked tirelessly to reach a compromise between the factions in the Army. His commitment to peace throughout the first half of 1922 frustrated his militant comrades.

The Civil War might have broken out in March 1922 when the Pro-Treaty forces marched into Anti-Treaty Limerick City to take over the Military Barracks. Liam Lynch was at the forefront in averting hostilities.

In June 1922, Liam was against the occupation of the Four Courts by Republican forces.
It was not until the National Army’s shelling of the Four Courts under pressure from the British Government that Lynch was eventually forced to take sides.

That day, he and Liam Deasy were held up by National Army troops in Parliament St. and bought to Wellington (now Griffith) Barracks. When asked by Eoin O’Duffy what he thought of the situation, Lynch replied “I think ye’re all mad.”

O’Duffy released Lynch and Deasy in the hopes that these moderates might help to convince the southern anti-Treatyites to stay out of the war.

It was not to be. Knowing the shelling was done at the connivance of the British Government, Lynch and Deasy went south to organise resistance in the place they knew best, the Republican stronghold of Munster.

The Civil War was a progressively brutal affair. As Chief of Staff of the IRA, Liam oversaw the military tactics, first opting for conventional warfare but, by August 1922, he was fell back on guerrilla tactics as the better equipped National Army continued its steady progress southwards.

He insisted that Free State prisoners be treated with the same dignity as soldiers of the Republic and would not question them, believing it was dishonourable to ask them to betray their own side. “C’est magnifique, mais ce n’est pas la guerre” quoted Moss Twomey on Lynch’s scruples.

On Sunday April 10, 1923, near Goatenbridge, seven beleaguered Republican officers ran up the side of the Knockmealdowns escaping a dawn swoop by the National Army. Moss Twomey was at Liam’s side. Amid a hail of National Army rifle fire, they dashed towards the hilltop and freedom.

After a lull in firing a single shot rang out and Liam fell. His companions carried him on up the hill but by his order, they left him, taking his precious papers with them.

Frank Aiken later said, “Leaving him there was the hardest thing we ever had to do.” Liam was tended to by National Army troops and carried down the mountain on an improvised stretcher. Severely weakened by then, he died at approx. 8:30 that night in the hospital in Clonmel.

His body, dressed in Volunteer Uniform, lay in state in the hospital chapel attended by local members of Cumann na mBan. As his coffin was carried from the chapel out of the town, National Army troops presented arms. Clonmel, which had fallen to the Free State in August of 1922, paid its own tribute. All businesses were closed and blinds were drawn as a sign of respect and mourning. In accordance with his dying wish, Liam was buried in Kilcrumper Cemetery, Fermoy beside his friend Michael Fitzgerald who died on hunger strike in November 1920.

The National Liam Lynch Commemoration pays honourable tribute to this brave warrior as did people from both sides of the conflict on his death. The approaching Civil War Centenaries will be difficult, but perhaps, from the darkest days of our past, we might yet find a guide to our future.

The Liam Lynch Monument is clearly signposted from the village of Goatenbridge. We welcome you to join us on the mountain this Sunday at 2:30pm.