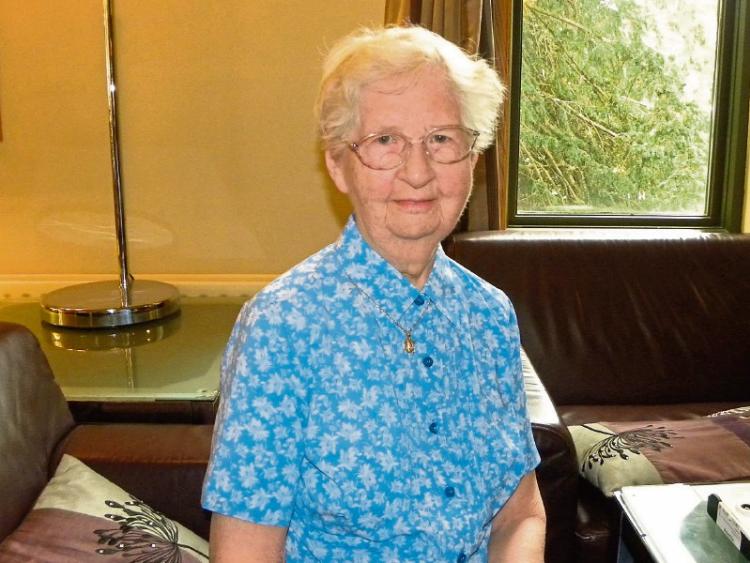 Agnes was born in Ballycamas House, Clonoulty, on the 21st January 1925. She was the ninth of Paul and Margaret Quirke’s (nee Molony) eleven children. Annie, Dan, Mary, Jim, John, Nora, Brigid, Phil, my mother Josephine and PP (Paul Peter) all predeceased her.

She had two wonderful parents, both of whom had a deep faith. Prayer played an important part in their lives and after the rosary there were trimmings – “God bless Brigid, Agnes and Josephine, make them good children and make them nuns when they grow up”. They were hard-working people, and generous, her father often sending bags of apples, milk and potatoes to neighbours. Her mother gave clothes to the travellers who regularly called to the door. On Sundays they had a full house when the townies came to visit the country cousins. During the long hot summer months they went swimming in the river.

Agnes attended primary school in Clonoulty then moved to the Presentation Convent in Cashel, followed by some time in Cahir Convent where she completed her Leaving Certificate. She joined the Little Sisters of the Assumption (LSA) in October 1945, just a week after her mother died. Agnes made her first Profession, vowing Poverty, Chastity and Obedience in Clondalkin, Dublin in 1948 and spent the following year in Camden St, Dublin. She then spent three years training to be a nurse in the Mercy Hospital, Cork.

Agnes started her nursing career in 1952 in Llanelli, South Wales. In 1954 she visited the LSA Mother House in Paris where she received her final Profession on July 28th. In 1956 she was transferred to Wrexham, North Wales. The LSA had a directive that the first thing they had to do when entering a house was to begin the day with a prayer. Agnes said that every home she visited she first knelt down and prayed. And looking back, she was amazed that they accepted it, given that the majority of their patients were non-Catholics.

Agnes moved to Belfast in August 1969, at the height of the Troubles. She visited families who had lost father, mother, sister or brother as a result of the Troubles. Her life was dedicated to nursing and caring for the sick in their own homes, be they Catholic or Protestant – “A man’s creed, race or colour matters not. If he is ill their sole desire is to help him and his family in their hour of need.” She not only cared for the sick but she also did housekeeping and prepared meals for the children. She visited the prisoners in Long Kesh and Armagh prisons, and supported them when they were released.

Following her time in Belfast (30 years) Agnes moved a number of times – Dublin, Limerick and back to Dublin again. She missed Belfast a great deal and continued to visit regularly. People would stop her in the street to thank her for the help she had given their families many, many years after she had left. 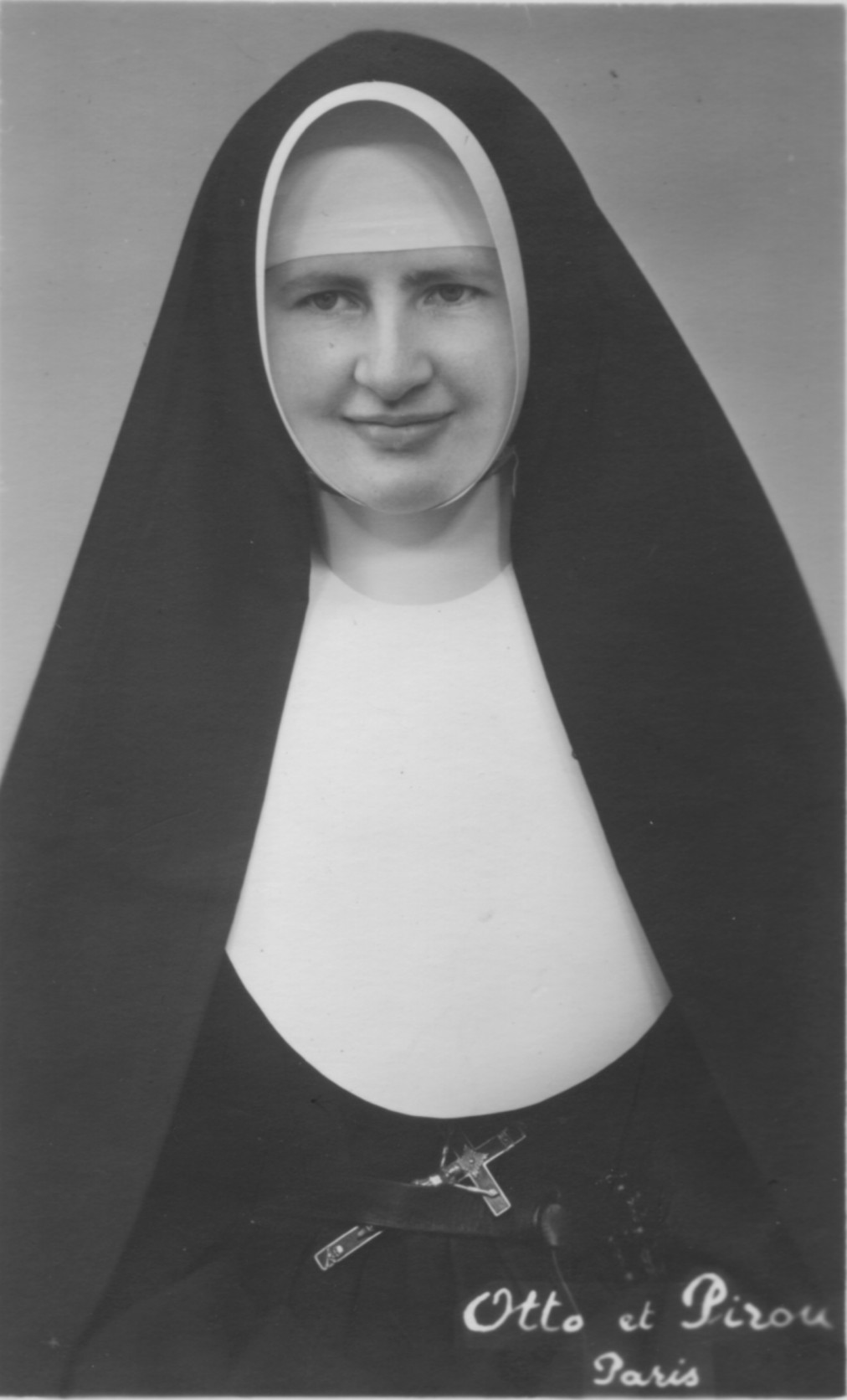 She lived in Moyross, Limerick at a time of great difficulty in the early to late 2000s, and spent a lot of time helping the young families who were struggling to survive in this disadvantaged and crime-ridden area of the city. Agnes only realised how much work they did and the impact it had on the communities they worked in, when she came home and spent time with sick members of her own family.

It always amazed me how she accepted everything that came her way. She moved house so many times, as the LSA communities became smaller and smaller. Just when she had settled in she was asked to move again. And each time she packed up her belongings and moved to the next house without complaint. She adapted to whatever came her way.

You could talk to Agnes about anything and not offend her. She had a great sense of humour and was open to trying new things. She visited family in London and the United States, and her favourite place, Medjugorje. She loved nature and was green fingered, often rescuing my geraniums when she came to Tipp. She loved to sit in her room in Liskeveen looking out on “this little bit of paradise”.

She was a great letter-writer and remembered birthdays, even of her grand nieces and nephews, and always sent cards. And she loved her mobile phone! It was her lifeline to family and friends. She was a whizz at the computer and regularly sent emails, and created her own cards for special occasions.

Agnes had a deep faith and be lieved strongly in the power of prayer. She meditated and loved to go on retreat. She prayed for everyone. Although she had been in hospital for a short while (for the first time in her life) she surprised us all when she died suddenly of a heart attack on Christmas Eve night at home in her own room in Finglas. She rang me at 7.30pm. My phone was on silent as I was at mass in Boherlahan, a place Agnes knew well. All the lights went out in the church at 8pm. Saying goodbye, perhaps. She will be missed by all who knew and loved her.

Memories of my childhood (in Agnes’s own words)

On the farm we had lots of horses, for ploughing and bringing in the hay, and the ponies – Nellie – for taking us to mass, school and shopping. We had lots of sheep and I had a pet lamb which I loved. We were a very happy family. We had a very simple life:

- Going to the river for a swim

- Going to the hunt on St Stephen’s Day

- We looked forward to midnight mass, opening our Christmas stocking which contained an orange and a bar of chocolate

- Rolling down the hill field in the snow

- Picking wild strawberries and mixing them with cream

- Picking mushrooms and frying them on the range – just gorgeous!

We all looked forward to Christmas and to our big sisters and brother coming home on holidays. We loved the summer and spent so much time at the river, sometimes swimming three times a day. The worst time of year was the winter, so cold, dark and dreary.

No electricity, central heating or light except the paraffin oil lamp. No water except the pump in the yard. No toilets! What a change in this modern world. I wonder are people as happy as we were in those days when we had so little to today’s commodities.