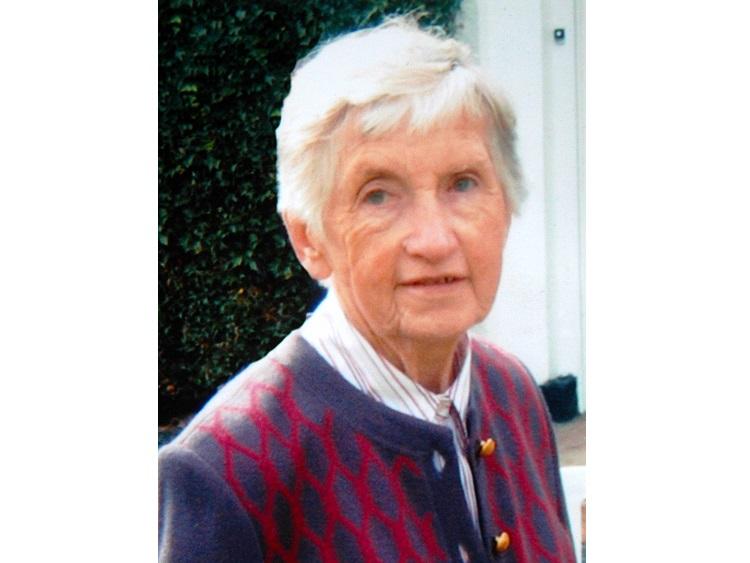 Sister Gabriel Mary Gleeson passed away in her 90th year, at 10.00pm on June 5 last 2019, surrounded by her loving family and community members, at Temple Road in Dublin.
Possibly better known by the Christian name GM to all that she came into contact with during her life; she was born on November 8 1929 in the picturesque, rural townsland area of Clogher, Clonoulty, Co. Tipperary. Educated at the Presentation School, Cashel, Sister GM went on to complete her training as a nurse and later a Midwife, in the Mater Hospital Dublin.
She entered the congregation of the Missionary Sisters of the Holy Rosary in 1951; making her First Profession in Killeshandra, Co. Cavan on August 26 1954.
During a working life spanning, in all, some 62 years; from 1946 until her retirement 11 years ago, in 2008, Sister GM ministered as a Nurse; Ward sister; Matron; Hospital Administrator; Relief Worker; Regional Councillor; and as a fundraiser for numerous projects undertaken in various missions, e.g. in the towns of Emekuku and Amaimo in Imo State, South Eastern Nigeria; the village of Adazi, Nigeria; in Thika, Kiambu County and Ortum in Kenya; in Philadelphia, U. S. A. and back here in Ireland.
During that tragic period of the Nigerian Civil War, (also known as the Biafran War and the Nigerian-Biafran War), fought between the government of Nigeria and the state of Biafra, Sister GM and her colleagues threw themselves into relief work at huge personal cost. Indeed, her family here in Tipperary were hardly able to recognise her on her return to Ireland, following her experiences which saw, following the blockade the city of Port Harcourt, mass starvation. Indeed, during the two and half years of that war, there were overall about 100,000 military casualties, while between 500,000 and 2 million Biafran civilians died of starvation.
Following recuperation, Sister GM returned again to Africa to a new mission, this time in Kenya as an administrator in Thika Maternity Hospital. Over the next 30 years she continued to build and strengthen the hospital’s services, with emphases on establishing and improving a Midwifery Training school.
During this period, Sister GM worked through and experienced the worst drought and famine in some 50 years in Africa in 1985; to be repeated again 1997. An unpublished poet, it is perhaps through one of Sister GM’s many expressed elegies that we can begin to understand her great sacrifice on behalf of those she had fully committed to giving support and guidance.

The first image the observer got of Sister GM was that of an “open door”. Regardless of her location, or indeed any persons own personal rank or status in society; you, the visitor, would have been embraced and then fed with whatever food was found to be available in the kitchen fridge.
This hospitality was especially evident in Ortum, Kenya. Because of the remoteness of the area and the dire state of the existing road surface, those visiting Turkana or Sudan would most often break their journey in Ortum, in the secure knowledge that Sister GM could and would provide a warm Clonoulty, Co. Tipperary style community welcome to all or any traveller. Initially sleeping accommodation was provided on five large couches in the convent garage. Same hospitality offerings would later eventually lead to 2 hospitality bungalows being built, thus ensuring comfort and space for all.
Through her lifetime Sister GM displayed a lust for life and true faithfulness to her missionary commitments. Amongst her many talents; she displayed an abundance of empathy; artistic creativity, the latter through the very strokes of her artists brush and through the verses she penned in her poetry. She at all times displayed a love, not just of nature, through her love of flowers and animals, but also through her care of hospital patients - her outreach public health patients; her Mother and Baby Clinics and especially amongst her student nurses and staff, many who travelled from abroad to say a last farewell.
A Funeral Mass was held for Sister GM at 12.00 noon on June 10, 2019 last in the Church of the Holy Name, Beechwood, followed by interment in Shanganagh Cemetery, Dublin Rd, Dun Laoghaire-Rathdown, Co. Dublin.
Ar dheis Dé go raibh a h-anam dílis.