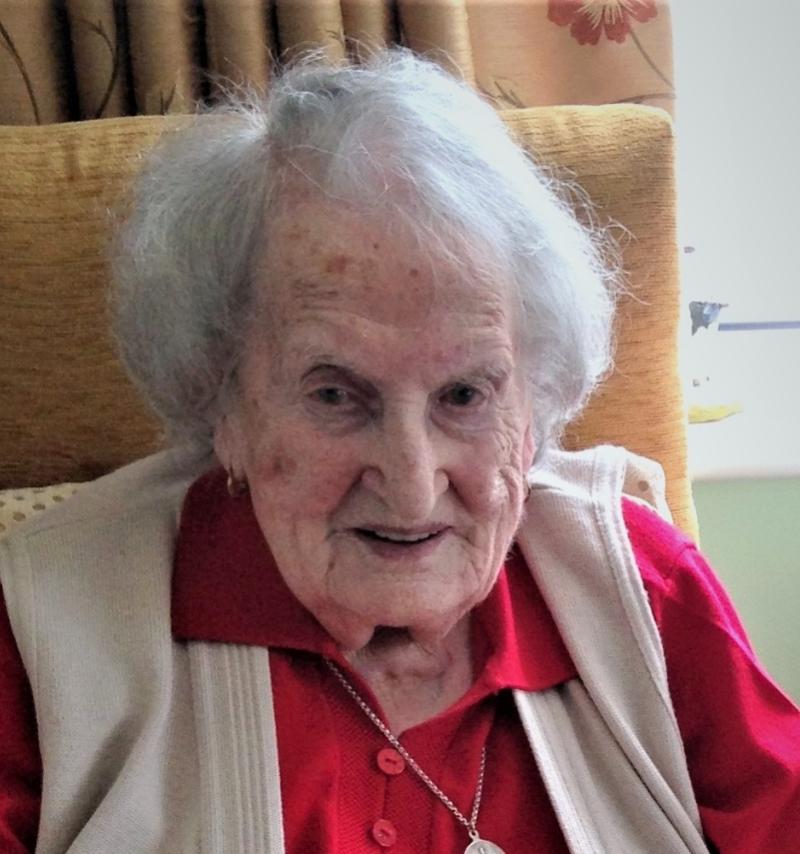 My cousin, Alice McGrath, passed away in her 106th year on Thursday, April 15. Her nephew Tim Ryan, formerly of Grange, Donohill, delivered a tribute to Alice at her Funeral Mass in St Brigid’s Church Annacarty, on Sunday, April 18, 2021.

With the permission of Tim, I am reproducing here a section of the tribute, which I think encapsulates the life of the late Alice, writes Martin Quinn.

“Today we salute the passing of a great lady in her 106th year, the oldest person from her parish of Annacarty-Donohill and one of the oldest people in Munster and the country. Alice McGrath spent all her life in Annacarty and Donohill, the first part in Grange, Donohill in the shadow of the main Cork/Dublin railway line where she grew up, and the second part in Shannaknock, Annacarty, to where she moved when she married her husband, the late Matt McGrath.

“Alice lived a quite simple but happy and fulfilling life. She was born 105 years ago, on the 1st of April, 1916, the youngest of three daughters to Stephen and Bridget Taylor.

“Her mother died when she was just two-years-old, leaving three daughters, aged just 5, 3 and 2.

“Money was scarce in those early days of the 1920s and it is a credit to Alice’s grandmother, Margaret Carew, and other relatives who reared the three young girls in fairly difficult times.

“Alice was born just as the 1916 Rising was about to take place and three years later, on January 21, 1919, the War of Independence was triggered at Sologheadbeg, just a mile or so up the road from where she lived.

“Alice lived through the War of Independence, the Civil War that followed, as well as two World Wars and all the other various global and national disturbances that happened over the last 105 years.

“Yet, through all she experienced and witnessed, she remained the same outgoing and friendly Alice McGrath throughout her life.

“Alice got married in 1947 and moved to live with her husband and in-laws in Annacarty.

“There she adapted quickly to being a farmer’s wife and in helping daily with the endless round of milking, rearing young animals and of course feeding the chickens and hens.

“It was a small farm and to make ends meet, they regularly rented out extra land or meadowing elsewhere, to supplement their income. Life was tough but together, Matt and Alice made the best of it. In due course, Matt and Alice’s only daughter Mary came along and they lived the typical life of any rural family at the time.

“As I was Alice’s only nephew, I think she had a soft spot for me, something which I’m sure I took full advantage of whenever I could!
“It is generally acknowledged that children form a close bond with the adults around them when they are small and, as my mother spent some time in hospital after I was born, I spent time with aunt Alice, who was probably the person I felt closest to after my mother. I can still remember those early days with affection. In particular, I remember the amazing bread she baked with the separated milk Matt brought home from Annacarty creamery. It seemed to taste like no other bread I had ever eaten.

“Up to quite recently Alice had a bowl of porridge, a boiled egg and a slice of bread for breakfast. She was also a huge lover of potatoes and a dinner without them was not really regarded as a proper dinner at all.

“The other thing that stands out in my mind from those early days of the 1960s was the open house aunt Alice kept, where numerous neighbours came and went in the course of the day.

“Aunt Alice placed a huge value on neighbours and in keeping in regular touch with them and ensuring they were okay, particularly if they were elderly or living on their own.

“Matt McGrath sadly passed away in 1983, something that left a huge gap in Alice’s life.

“Typically she accepted God’s will, took the cards he had dealt her and got on with life.

“When she retired from farming she went to live with Mary and her husband Paul in their home beside Annacarty village.

“There she enjoyed many happy years of retirement, which were supplemented by often several bingo trips each week along with regular outings to Limerick or Dublin.

“On the bingo bus, she developed a new set of friends and I think she got as much, if not more, reward from these conversations than she did from the bingo itself.

“She also enjoyed short holiday breaks and up to a few years ago, enjoyed regular days away in Killarney where she liked to sit in her hotel room and gaze out on the magnificent lake.

“On April 1, 2016, Alice celebrated her 100th birthday with a gathering of relatives and close friends at her home which was a very special occasion for her and all her relatives and friends.

“One thing Alice did not like was hospitals and nursing homes, and it is my firm view if she had to stay in either, even for a short while, she would have died years ago.

“She was fortunate however in having a daughter and son-in-law who took great care of her, on a 24/7 basis, right up to her passing at her home on Thursday, April 15. Today I would like to pay tribute to Mary and Paul (Guilfoyle) for the magnificent manner in which they took care of Alice and to say they can forever be proud of a job done to the highest and most exacting standards at all times.

“They gave their time freely and graciously and can at least now know they made Alice’s last days as comfortable as possible.

“I would also like to thank Dr O’Dwyer, a number of regional nurses and all the Home Help teams who gave their time so willingly to take care of Alice over the years.

“Thanks also to Fr Coffey and Fr Kennedy for their numerous visits and words of comfort, which meant so much to her.

“Today is a sad day for all of us. While we will miss Alice McGrath we should also celebrate the wonderful life of a 105-year-old woman who lived life as it should be lived.

“While I rush around the streets of Dublin in the endless race we all seem to be in these days, images from the past often come to me in flashes of Alice, a wonderful woman, wife, mother, aunt and godmother, who lived a simple but fulfilling life and who set an example for all of us to follow. May she rest in peace.” - Tim Ryan
Excerpt from the poem The Waste Land by T.S Eliot which Tim read at the conclusion of his tribute.

“April is the cruellest month, breeding
Lilacs out of the dead land, mixing
Memory and desire, stirring
Dull roots with spring rain.”