The late Maura Grace was a ‘loving and kind homemaker’ 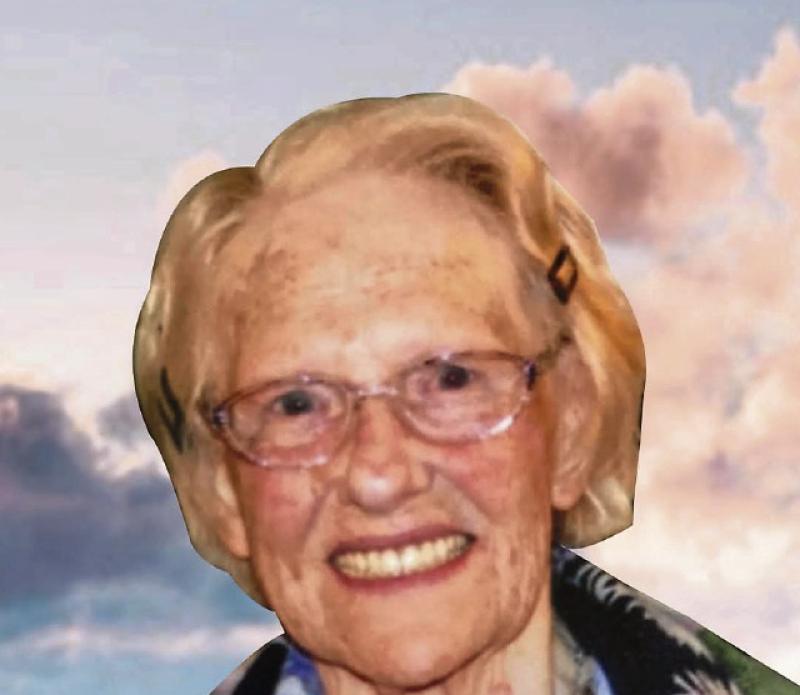 The late Maura Grace slipped away to her eternal rest on February 18 in her 98th year.

She was lovingly cared for at Greenhill Nursing Home in Carrick-on-Suir for the last six weeks of her life.

Maura was predeceased by Joe, her husband of 75 years.

She was born in 1923 to Michael O’Dwyer of Kickham Street, Carrick-on-Suir and Hannah Quinn of Briskey Lower, Kilrossanty, county Waterford and was the eldest girl of 12  children.

Maura lived all but 10 0f her 97 years in New Street in Carrick-on-Suir.

On completing her secondary school education, Maura worked in the local tannery for a number of years until her marriage. The couple  resided on Coolnamuck Rd. where the first four of their six children were born. Maura related fond stories and memories of their years in Carrickbeg. In the early 1950s she moved back to New St. to live beside her parents.

Maura’s primary focus was her family. She was a loving and kind home maker. Education was supported and encouraged. Her skill as a knitter was exceptional and most of her work was completed without the use of a pattern.

She was a member of the choir at St Nicholas Church and volunteered as a flower arranger. She had a firm belief in her faith and the power of prayer and was a constant attendee at daily Mass. Reading and the solving of crossword puzzles were among some of her pastimes. Letter writing was her primary and preferred method of communication. However, she did embrace and marvelled at new technology, in particular FaceTime. Coupled with excellent letters, Maura wrote poetry over many years. Her poetry was descriptive of people and place.

She had a great love for the surrounding countryside,in particular the Comeragh Mountains and Coumshingaun Lake which inspired one of her poems. Her last climb to the lake was completed in her late 70s.

Her storytelling will be missed and her recall of historical events was excellent with pinpoint detail of social and national political events. One of her earliest childhood memories was on the occasion her father brought her to Clonmel to see the first ’Talkie’ picture in the 1920s.

She was wonderful at tracing family connections and relationships.

Maura had a life long love of music and she especially enjoyed the Carrick Operatic productions. She also liked to travel and made trips to Lourdes,France,England, Italy and Canada.

Her Funeral Mass was celebrated by Fr Jimmy Browne at St Nicholas Church. Although in-person attendance was limited due to the Covid protocol, the Mass was transmitted via Zoom to a large online congregation.