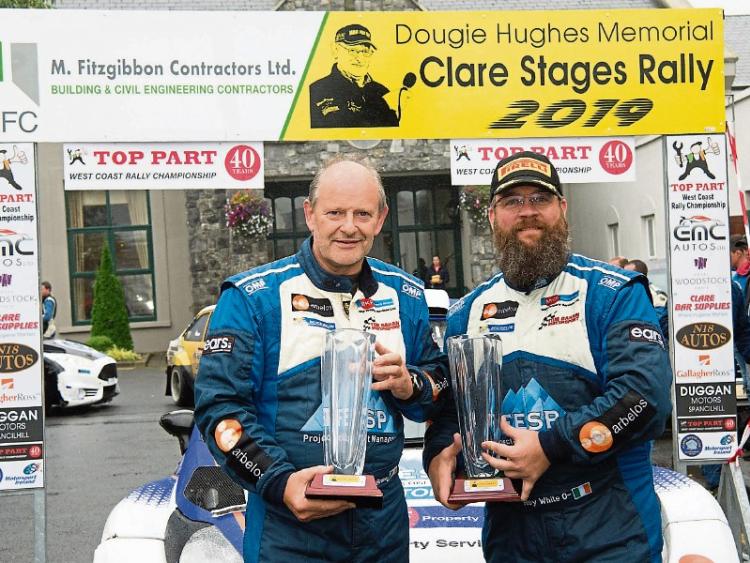 At the completion of the day’s nine stages they had amassed a 15 second winning margin over the Ford Fiesta R5 of Cork’s Daniel Cronin/JJ Cremin, meanwhile, Maynooth’s Ian Barrett and his Donegal co-driver Paul Magee (Darrian T90), who were White’s main challengers through the first five stages, finished 38.2 seconds further behind in third.

In very slippery conditions Barrett and White dominated the opening pair of stages with Barrett, a mere fraction of a second quicker on both stages to lead by just six tenths of a second.  However, White increased his pace on S.S. 3 to move 5.2 seconds ahead of Barrett with Cronin third.

While the leading duo punched in identical times on S.S. 4, Barrett was best through S.S. 5 as White couldn’t use the handbrake and Barrett went seven tenths of a second clear.  However, the balance of power reverted to White courtesy of the best time on S.S. 6 as he opened up a lead of 6.7 seconds with Cronin slotting into second.

On the final loop White extended his lead to 16.7 seconds prior to the final stage where Cronin was quickest but only reduced the margin by 1.7 seconds.  Barrett lost time when the ECU overheated and the car lapsed to safe mode.  White took the spoils and the Top Part West Coast Championship title on what was his final event of the season where, in recent weeks, he finished runner-up in the Triton Showers National Rally Championship.

Meanwhile, it was also a good weekend for Clonmel’s Michael Ormond/Paddy King (Honda Civic) who won Class 3 and Kieran Hayes/Andy Purser (Peugeot 205) who were victorious in Class 12.