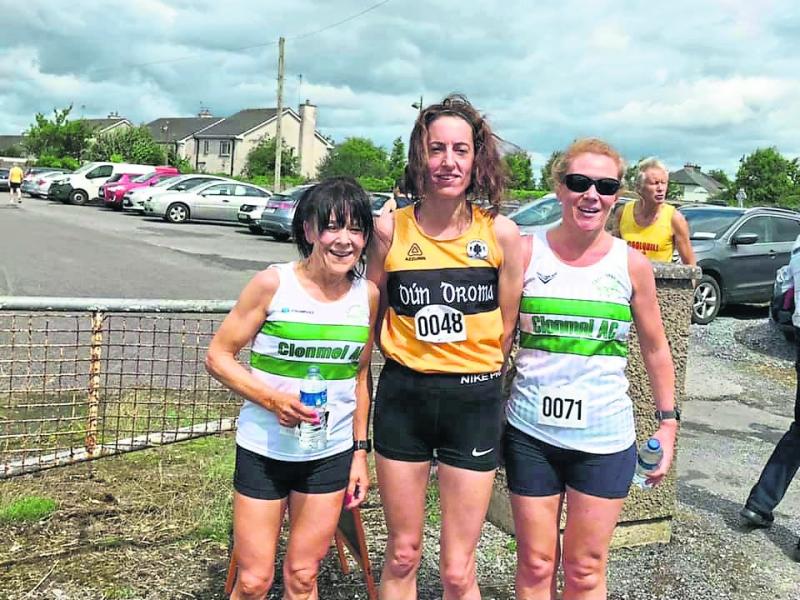 Moyne AC
County Masters Road Championships
Well done to Sinead Tynan who represented the Club at the County Masters Road Championships held in Clerihan on Sunday last. Sinead finished fifth overall in the ladies 6k event and went on to clinch the silver medal in the M50 category. Great running from Sinead.
County Senior Road Championships
These championships take place in Dundrum on Sunday August 22. Entries are now open, and all athletes interested in taking part should forward their details to Geraldine Hickey on or before Wednesday August 18.
Split the Bucket!
The winner of the Split the Bucket for Friday 6th August was Pat O’Connor, Barna. The draw takes place each Friday night at 8.30pm with several options available – 3 entries for €5, 12 entries for €20 (includes 2 additional free weeks), 28 entries for 50 (includes 3 additional free weeks).
Cut off for on-line is on Thursday evening at 6pm and any entries received after this time will be included in the next week’s draw. Your support for this venture is very much appreciated. Log on to our website www.moyneathleticclub.com for all the details

Moycarkey Coolcroo AC
Munster Juvenile T&F Results
The 2nd weekend of the Munster Juvenile Track & Field Championships took place last weekend July 17th +18. We had 4 athletes representing the club, On Saturday, first up for the club was Oscar Caffery in the Boys 13s 60metres Oscar had a very good run coming 3rd in his heat in a time of 9.50seconds but just missed out on qualifying for the final.
Dáire O'Donnell was next up in the Boys 15s 1500m where he ran a great race to win the Gold medal in a time of 4mins 31.30 edging out Cork athlete Jack O'Rourke who also ran the same time with just 0.17 of a second separating. On Sunday saw the Girls in competition, In the 13s 60meter Hurdles Rosie O'Brien was a very good race coming 2nd in her heat in a time of 11.75secs just missing out on the final, In the 15s 1500m Aoibheann Fogarty ran very well in a time 5mins 44.96 seconds, Congrats to All our athletes who competed excellently despite the scorching temperatures.
Dundrum 10k result: very well done to Aine Crosse who was our only representative at the Annual Coillte 10k road race on July 7th where she completed the 6.2 mile distance in a good time of 54mins 38 secs.
Euro U23 Round Up
Result from Tallinn Estonia July 8th at the European U23 Athletics Championships, Unfortunately, Sean Mocklers best throw of 63.95m wasn't enough to make the final this time around but it has been a great season for Sean and hopefully, many more to come. On Sunday, July 11 Ireland's Men's 4x400m relay team time of 3:11.22 in round 1 of the European U23 Track & Field Championships wasn't enough on this occasion to progress to the final, Our own David Ryan was due to be part of the team but days before he was due to fly out to Estonia David felt unwell & had a negative PCR test but didn't feel well enough to be at his best and had to make the hard decision that he could not compete, tough going for David but I'm sure he'll get the chance to represent Ireland again in the future and a fantastic achievement to have been selected for your country
Memorial Plaque for Jimmy
On Friday July 9, a memorial plaque was unveiled for the late great Jimmy Fogarty in Two Mile Borris Cemetery, Jimmy was a great servant to Moycarkey Borris & Moycarkey Coolcroo, Tipperary Athletics and the Community in general
Many people would have liked to have been in attendance for the Mass & unveiling which surely would have been a packed out occasion but due to Covid 19 that unfortunately could not happen. The plaque is available to see in the graveyard if you keep left as you walk in the gate about 200m in along on the wall you will see it. Many thanks to all the organisers and to his family and friends. Jimmy would have been looking down very fondly and would have been humbled to have been remembered in this kind way.