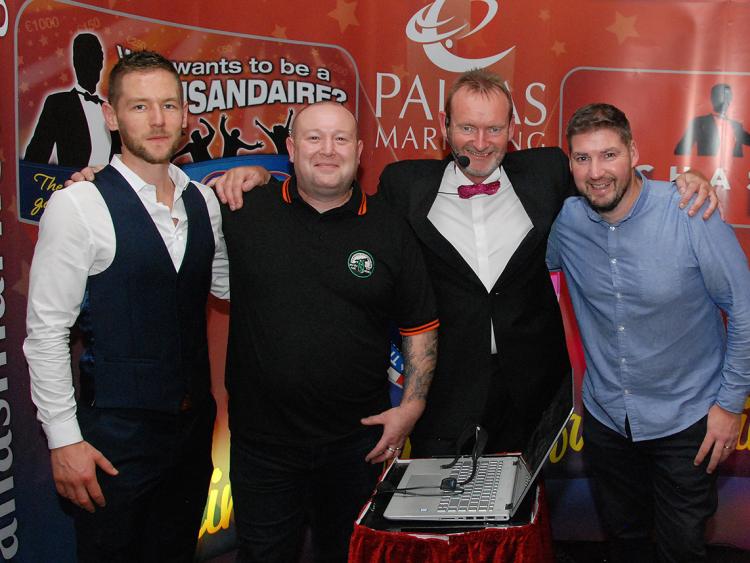 Organisers and contestants enjoying the night

Coláiste Phobal Ros Cré launched the event of the year as ”The Chaser" took place in the Racket Hall Hotel on Thursday, October 10.
Over 400 locals thronged to support the school as it endeavours to fundraise to fund a state of the art Autism Unit. The format of “The Chaser” was exactly as seen on TV. Each of the 6 contestants selected at random from the audience had the opportunity to win €1,500. However, one hurdle had to be overcome first. Three local connoisseurs of general knowledge Michael “Spud” Murphy, Michael Leonard & Mark McLoughlin made up a formidable triumvirate for each contestant.
As the contestants faced the chasers silence descended upon the auditorium. Fraught but not defeated the contestants accumulated over €3,000 between them on the night as relief turned to joy. The event itself would not have been possible without the continued support from local and national businesses whose continued generosity to Coláiste Phobal and its school community helped raise over €20,000.
As Coláiste Phobal pushes for a new school building such generosity could not have come at a better time. Work continues behind the scene to fund an Autism Unit and all donations are most welcome for this noble cause which will benefit the school and local community alike.
Mr O’Connor, School Principal paid special thanks to all exhibitors and advertisers, Pallas Marketing and the hard-working fundraising committee for all their help.