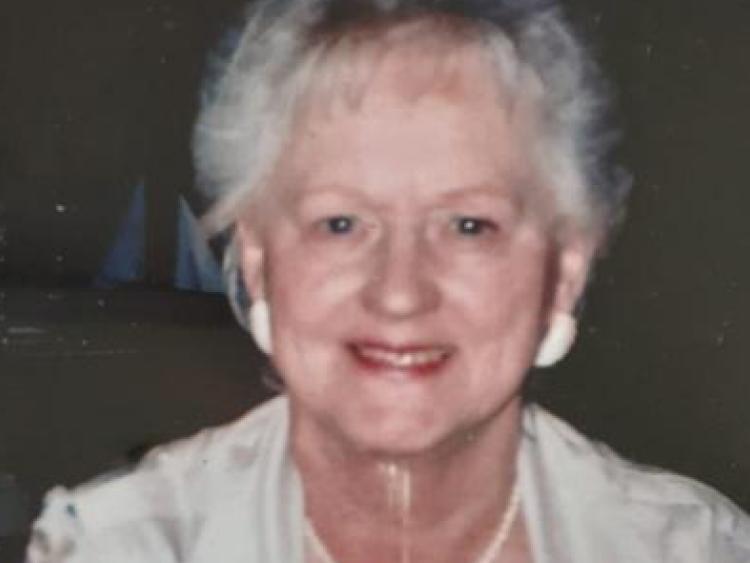 It is with deep regret that we record the death of Ann Morrissey, who died peacefully in the compassionate care of Villa Marie Nursing Home, Roscrea on August 7. Deeply regretted by her loving husband of almost 56 years, Garry.

Predeceased by her son Gerald.

She will be sadly missed by her loving family Denise, Marina, Terence and Garret, her brother Martin, her sisters Joan (Hussey) and Patricia (Cooke), daughter-in-law, sister-in-law, grandchildren, nieces, nephews, grandnieces, grandnephews, relatives and many friends.

Ann came to Roscrea from Tullamore in 1958 when her father and family moved to Fanure House where her dad, Patrick, established Fanure Fish Farm for the Inland Fisheries Trust. Ann worked in the office there. She took part in community life and was a member of Roscrea Musical Society, the choir in St. Cronan’s Church and Roscrea Community Choir which had the late Terry Horan as its leader.

Garry moved to Roscrea with the Bank of Ireland in 1959 and there he met Ann. They were married in the Cathedral of the Assumption, Thurles, on September 8, 1964. A guard of honour of Scouts from the 17th Tipperary Troop was waiting outside the Cathedral. Garry was Scout Leader of the Troop for 40 years.

Ann and her friend, Mary O’Meara, took part in Annual Camp for many years. They looked after medical emergencies and the culinary difficulties confronting the lads.

She especially looked forward to homecoming of family members including her daughter Marina’s regular visits from St. Anne’s Roscrea. Ann was a loyal follower of the faithful county and was delighted when trophies Liam and Sam graced her table when her cousin, and All-Ireland medallist, Liam, brought them on a visit to Frankfield.

Frankfield is this year celebrating its bi-centennial having stood on Convent Hill since 1820. It is mourning the passing of its faithful custodian, Ann, for forty-six years.

Ann’s funeral mass on August 10 was celebrated by her good friend Fr. Tom Corbett assisted by priests of the parish Fr. Pat Treacy, Fr. Michael Harding and Fr. Lorcan Kenny. Denise and Terence did the readings and the Prayers of the Faithful were said by grandchildren Róisín, Emma and Lillianne. There was no delay after mass as the appointment for the crematorium in Shannon was an early one.

Month’s Mind mass for Ann will be at 11.30 am on Sunday, September 20. It will be screened on the parish website www.stcronanscluster.ie.

The Morrissey family are very grateful to their friend and neighbour, Fr. Michael O’Meara, for his continued friendship and support during Ann’s illness.

They also extend their thanks to the Matron and staff of Nenagh Hospital, the nurses and staff of Villa Marie and to Donal and Paddy Tierney for their care and attention. Ann’s ashes will be interred at Clonminch, Tullamore in the family grave at a later date. Solas na bhflaitheas ar a hanam uasal.