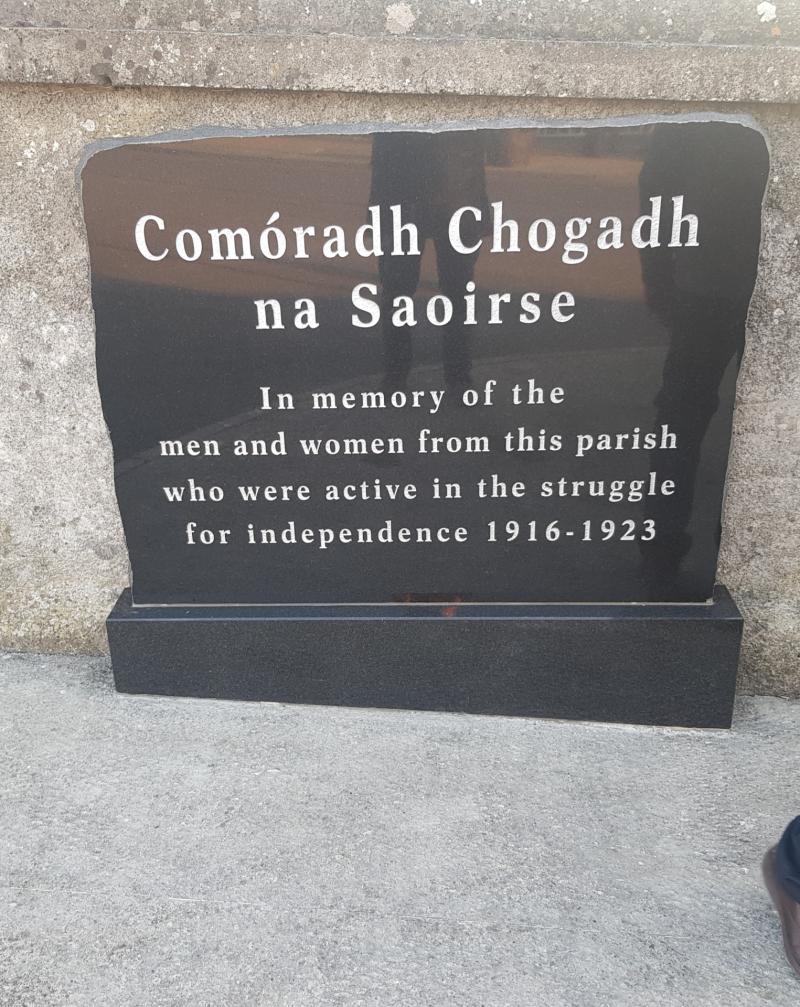 The plaque which was unveiled in Moneygall

After being delayed for two years with Covid, a large plaque was finally unveiled in the village of Moneygall on Sunday evening 24 April 2022 by Dunkerrin Parish History Society to remember the men and women of the parish who were active in the struggle for independence between 1916 and 1923.

On behalf of the Society, Pat Sheedy welcomed the large attendance who witnessed the unveiling by ninety-year old Seán Kenny, who knew many of the generation involved.

Guest speaker, local author and historian, Seán Hogan, emphasised the importance of remembering the generation which were central to Ireland’s Decade of Revolution a hundred years ago.

“They saw the evacuation of 3000 members of the British Crown Forces from Tipperary one hundred years ago and gave us that most precious thing - our democratic state in which we now live”, he said. “This wonderful Comóradh Chogadh Na Saoirse plaque is a permanent reminder to future generations of the sacrifices which that great generation made and how we need to cherish and protect their achievements.

“It is especially important to see that generation of young women being recognised here, as women had such critical roles and had to undertake so much of the work normally undertaken by young men who were ‘on the run’. They were also the ones left at home who had to face the much-feared raids of Crown Forces – including Black and Tans and Auxiliaries” he said.

A number of individuals from Dunkerrin parish, like Bill Hoolan and Jack Collison, had central roles in the development of Sinn Féin and its related organisations which changed the course of Irish history. However, Hogan emphasised that it was the every day work of a broad swathe of men and women in the parish, led by local company captain James Toohey, which underpinned the dramatic political change which occurred. Several were imprisoned because of their activities and families suffered severe hardships.

The hills over Moneygall were the main base of the North Tipperary’s IRA ‘Active Service Unit’ or ‘Flying Column’. The ‘Column’ was formed and did their initial training in Moneygall parish and returned there frequently to what they regarded as a safe space. Five men from the parish served in the Column and it was led by Moneygall man Jack Collison in 1921. Supporting the presence of twenty to thirty young men and maintaining their security was a huge trans-generational community effort, he said.

Hogan recalled all those killed in the incidents in the parish in both the War of Independence (George Frend, Michael Kennedy and Jack O’Leary) and the Civil War which followed. He highlighted the tragedy of the deaths of two young men from the parish who had fought on the same side at the Modreeny ambush in June 1921, but were killed on opposite sides in the Civil War which followed.

Jack Collison, an officer in the newly formed National Army was fatally wounded in July 1922 in Laois and his neighbour and former comrade Joe Mangan was killed in an encounter between that same National Army and the Anti-Treaty IRA in Silvermines early in 1923. Two other National Army soldiers from Roscrea, Patrick Byrne and John Gunning, were killed in the parish also.

Hogan commended the Dunkerrin Parish History Society on their initiative in commissioning the plaque which was provided by Tim Ryan, Monumental Sculptor in Roscrea. As well as the Society’s annual programme of lectures, he said the publication of three volumes of parish history since 2018 is a vital step in achieving the objective of appropriate historical remembering of that great generation and the individuals from Dunkerrin parish.