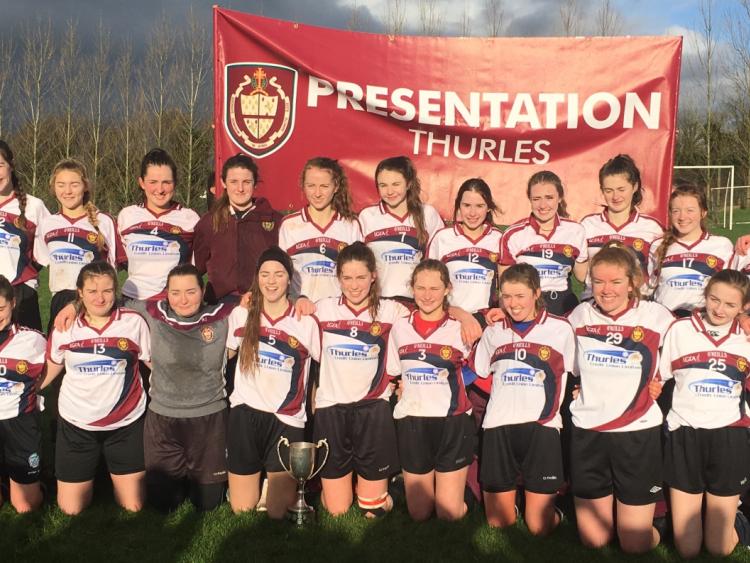 Presentation Thurles captured the Munster Senior A soccer title for the second year in a row with a stunning victory over 2017 All Ireland champions Coláiste na Trocaire Rathkeale.

The Pres girls settled into the contest early and pushed the Limerick girls back with a series of attacks. This early pressure was rewarded in the seventeenth minute when Lauren McCormack emphatically finished an Emma O'Sullivan cross to the net.

However, Rathkeale were awarded a penalty which Rachel Sweeney spectacularly saved to a huge ovation from the Thurles supporters.

Just as half time approached Pres Thurles struck a killer blow as an Aoibheann Clancy free kick was parried by the Limerick keeper into the path of the onrushing Missy Condon who calmly dispatched the loose ball to double the Pres lead.

The second half saw Rathkeale apply a lot of pressure, but the Pres defence remained strong. Saoirse Teer put in a flawless performance from the right back. Ellen Moore battled tirelessly and Anna Gavin won the midfield battle.

With the minutes ticking away Pres Thurles added a third goal after another fantastic run from Lauren McCormack who fed Ellie Maher, the latter making no mistake with a composed finish.

Pres captain Katie Ryan received the cup for a second year running and thanked her teammates, coaches and mentors. The All Ireland semi-final will be played on January 31 against the Leinster champions.