On May 9, at the EU Council Summit in Sibiu, Romania, the Bucharest EU Children’s Declaration was presented to European heads of state, including Taoiseach Leo Varadkar.

The declaration is the first of its kind, it is written by children, for children, and calls on political leaders to consult children in decision-making.

On May 4, prior to the declaration being presented, I travelled to Bucharest with UNICEF Ireland.

I also travelled with Ismail, a Sudanese refugee now living in Dublin, also selected by UNICEF Ireland to represent the views of children in our country. I had never met Ismail before, but we got along brilliantly, and his story about his long and perilous journey from Darfur to Ireland was truly inspirational.

Ismail came to Ireland as part of the programme to take in 200 unaccompanied minors from Calais, to date only 41 have been accepted. 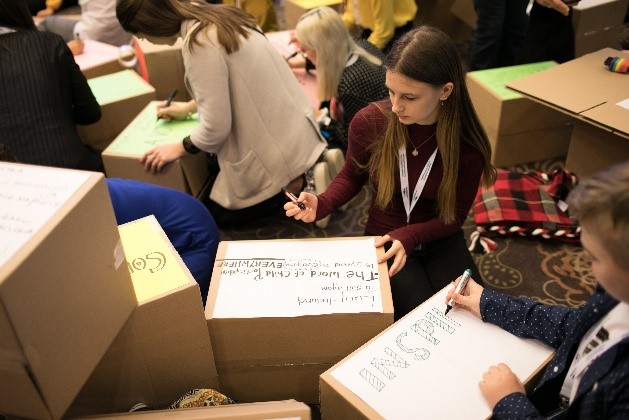 Upon arrival in Bucharest, we were met by over 60 other young people from 16 different countries around the EU.

The ‘Pre-Conference’ lasted two days, in which we all got to know each other, discussed the Bucharest EU Children’s Declaration, and talked openly about our desires for our own countries in regards to child participation, at all levels, in our schools and communities as well as our in our governments and at EU level.

The conference was held fully through English, and I was amazed that every single young person spoke English with such perfection and eloquence, while many of the adults in attendance needed translators.

On May 6, the conference began and lasted two days. Attended by over 60 children from 16 different EU countries, as well as over 100 child’s rights experts and European high-level officials.

We brought our ideas to adults through panels, discussions, group exercises and ultimately, our declaration.

In return, the adults shared with us their ideas and hopes for child participation.

Aside from discussing the important topics, we chatted and joked over lunch-breaks (and tea!).

The greatest part was being able to talk to anyone you met openly, I didn’t realise that I had been talking to the Former President of Malta until she handed me her business card as she walked away!

After two amazing and momentous days, we finished by building cardboard boxes in teams, my team included a representative from the Irish Children’s Ombudsman, and young people from Croatia and Romania.

On the boxes we wrote our personal commitments to bringing forward child participation in all aspects of life. A huge wall was built from all the boxes, a wall of hope.

I came away from the experience incredibly inspired, and will work on putting what I’ve learnt into practice.

I also encourage other young people to do the same, in your schools and communities, we have a right to a voice.

We don’t want child participation to be just a thrown around phrase that leaders use to make us feel ‘heard’, we want a clear pathway to show how our countries can implement mechanisms to make it a common practice.

Not only because decisions being made now will affect our future, but because they affect us in the present as well. No decision should be made that affects a child, without consulting children.

“Nothing for children, without child participation.”