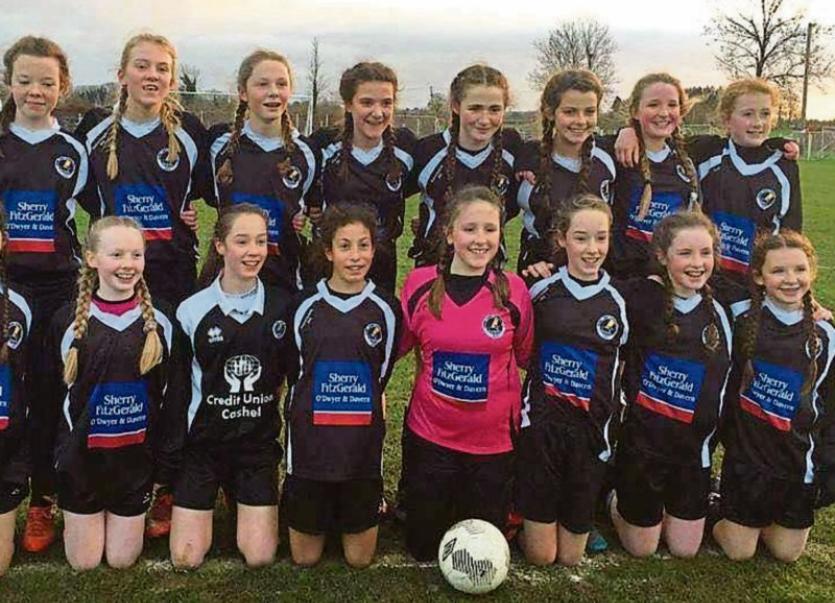 The largest crowd at Palmershill for years witnessed a heroic effort by Cashel Town’s U14 Schoolgirls, in a heartbreaking finale to their heroic FAI Cup campaign, last Sunday.

The girls came just short of earning a place in an FAI Cup final for the first time in the club's history, against Irish U13 champions and Dublin Metropolitan Girls League leaders, Kilmore Celtic.

The margin between winning and losing was never thinner - it took a goal in the sixth minute of injury time, in the second half of extra time, to put the Cashel girls to the sword. And the game itself was one of the best advertisements for schoolgirls soccer witnessed by the crowd, and ensured Cashel Town is now a force to be reckoned with.

That the game went ahead at all was testament to the work done by Cashel Town who ensured that the pitch was in playable condition, the only one in the county last Sunday. Within minutes of the kick off it was clear that the crowd were in for something special as both sides went at each other hammer and tongs.

Cashel had slightly the better of the opening exchanges with an Allessia Mazzola snap shot being the first in anger on what turned out to be a long day.

At the Cashel end, Aoibhe Gayson Molloy was having a stormer of a game at centre half and she cut out the Dublin forwards time and again, ably abetted by her defensive colleagues. The first goal came midway through the half through the sheer persistence of Fiona Tuohy who harried the Dublin line and forced a mistake before taking the ball on and shooting home.

This got the crowd jumping and Cashel were now turning the Kilmore girls at every opportunity, forcing hurried clearances and desperate last gasp tackling. But it wasn’t enough to keep the Tipperary girls out, and 10 minutes before the break Allessia Mazzola doubled the lead when she beat the keeper to the ball at the edge of the area, and then rounded two defenders to fire to the net.

There was only one team in the game at this point with the pre-match favourites rocked back on their heels, and Cashel rampant through the middle and front areas. Katelyn Downey was putting in a huge performance along with Lily Fahie on the left wing. And in the final five minutes of the half, both Katelyn and Allessia had chances to make it three nil, which were spurned.

Had either of these gone in, it would be hard to imagine Kilmore getting back in this came, and they were more than happy when they got the respite of a half time whistle.

Whatever was said to the Dublin girls at half time, they came out in the second half a completely different proposition. They started to physically dominate the home girls, began to press the ball much higher up the pitch, and managed to pull a goal back through Kiesha Hutton five minutes into the second half. This gave them renewed confidence and in honesty, they owned the majority of the half, even as Cashel clung on to their slender lead.

Eventually the pressure told and Hutton struck again to level the game at two all. Many observers felt that Cashel might crumble at this point, but they dug deep into their reserves and stood toe to toe slugging it out against one of the best teams in the country, steadying the ship and bringing it to the safe port at the end of the game still all square.

In the first half of extra time Cashel re-asserted themselves, once again on top and creating chances, the best of which came from the brilliance of Fiona Tuohy who looked to have put her side back in front with a shot from the edge of the area, only to see it saved by the fingertips of the Kilmore keeper. That was the last real chance of the game, until the referee awarded Kilmore a last minute free kick about 25 yards from the Cashel goal.

The Kilmore centre half lined the free up, but then was stopped taking it by her own bench, who sent her in to goal in anticipation of a penalty shoot-out. Confusion reigned as the Kilmore girl struggled with jersey and gloves, and it took six minutes before the free was finally taken. When it did it flew through the Cashel wall, struck the bottom of the post and rebounded out to the feet of Celtic’s Emma McGrath who slammed home from less than six yards out.

It was a cruel blow leaving the Cashel girls no time to get back in the game, and they collapsed gutted to the wet turf at the end of the game. Beaten but far from bowed they won the hearts and praise of friends and opponents alike, and announced themselves at the top table of Irish schoolgirls soccer, a position they now seem to have an appetite for.