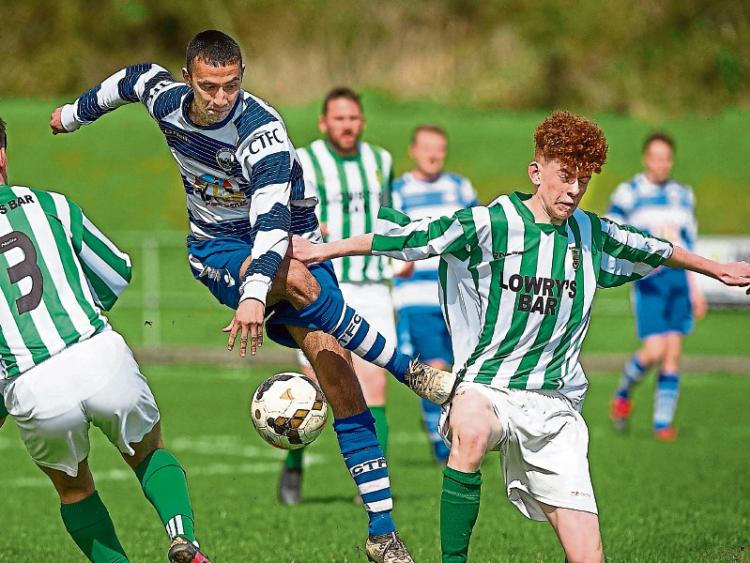 James Harding (Cashel Town0 and DJ Cremins (St Michael's) who were both on the mark for their respective sides in last Sunday's Division 1 game at Palmershill, Cashel.

Cashel Town made their return to the Division 1 League on a scorching hot afternoon at Palmershill on Sunday and finished up with a late win to give themselves their first three points of the season.

It wasn’t all plain sailing however in a game that ebbed and flowed throughout.

In fact it was the visitors who had the better start when they took the lead from the penalty spot after only three minutes. A rash challenge at the edge of the area gave DJ Cremins the opportunity to put his side ahead and he seized it gleefully, slamming the spot kick to the net.

It was a lead that lasted only three minutes however as the home side equalised from a penalty of their own that had been awarded for a handball in the area. David Butler made no mistake from 12 yards to the delight of the home crowd.

There were plenty more opportunities for both sides in a very open first half but none were converted at the teams went to the break level.

The visitors started the second period the same way as the first and retook the lead only two minutes in when Jason Sutton finished from a cross from close range.

Cashel were constantly pushing for a leveller though and finally got back on terms when Callum Meagher finished off an assist by evergreen Ian Hahessy.

The Saints were awarded a second penalty just after the hour mark, but this time the shot was blazed over.

The heat took its toll and there was a lot of tired bodies as the game looked like it was heading for stalemate, but in the final seconds Cashel striker James Harding popped up to take advantage of a defensive error and rolled the ball into an empty net to secure all three points for his side.

Wilderness Rovers had a perfect start to the season on Sunday last when they overcame a sluggish Slieverardagh United side in perfect conditions for football.

The home side had the better of the game from the off but often found it hard to fashion good chances from the large amounts of possession that they had. It took them until five minutes before the end of the half to capitalise on the pressure when they finally opened the scoring through Sean Browne who headed home from close range.

As is often the case, when one things finally comes along the second follows soon, and so it was here when ‘The Wildies’ doubled their lead within minutes through the prodigal son returned, as Seanie O’Hara capped an excellent debut for the side with a well taken volley to put the home team two up at the break.

The second half was more of the same and the third came through hard work by O’Hara who squared for Bob Buckley to pile home.

The home side though were guilty of taking their foot off the pedal and Slieveardagh got a deserved consolation from the penalty spot near the end, but it was never going to put the final result in doubt.

The unfortunate story of this game was the two late injuries that put the home side down to nine men for the final minutes of the game, but they fought bravely to rescue a draw in a clash that saw a two teams coming to the Division from different places last season.

Peake Villa were fresh and fired up and took an early lead through Cormac Lannigan as the home side seemed unable to shake off the ennui of last season’s relegation. They finally did however when they found a late equaliser to rescue a point through the hard work of Marky Roche and Tony Byrnes.

All in all both sides probably will have felt they could have snatched all three points, but in the end a draw was the fair result.

As was to be expected this was a feisty affair which ended in the two Clonmel sides sharing the spoils at Green Lane on Sunday last.

Clonmel Town started better and took the lead after 19 minutes when Paul Ryan was picked out with a pull back and he scored into the corner. The home side drew level drew level seven minutes later, when a lovely David Grace cross was volleyed home by Sean Maher, with the visiting keeper rooted to the spot.

And the Bridge had a great chance to go ahead just on half time, when Darren Murphy was through on goal, but his shot was straight at the keeper, who did well to save with his legs.

Both sides tried to retake the lead in the second period but the best of the chances fell to home side. Darren Murphy tested the Clonmel Town keeper on 71 minutes, and Sean Maher tried to get onto a ball to the back post a minute later but just couldn’t connect.

A back pass to the Town keeper put him in trouble and Kyle Ryan came close to taking the ball off him but somehow the goalkeeper managed to get the ball away.

Two players were sent off late on for the visitors both for second yellow cards, but even with the numerical advantage the home side were unable to capitalise and get the goal that would have ensured all three points. They will see this an an opporunity lost and  will be disappointed that they couldn’t get their season off to the better start.