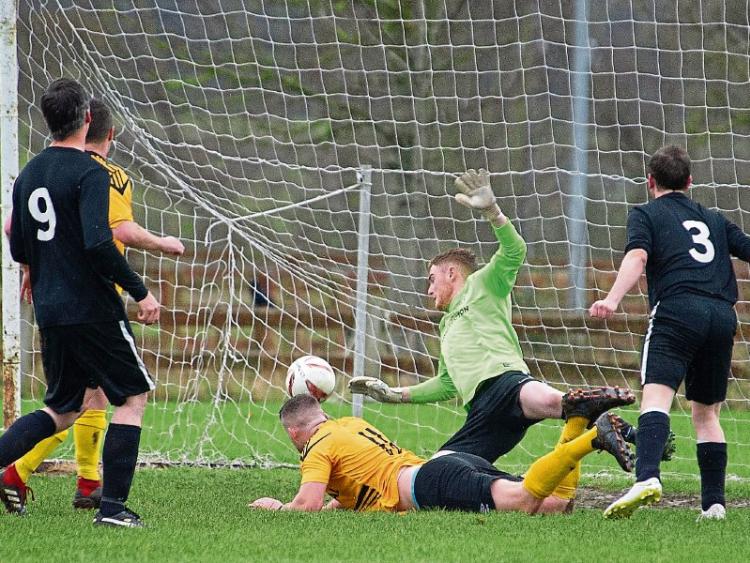 Dyaln Guiry scoring with a low header to the Galbally United net in Sunday's Tipperary Cup game at Ferryhouse. Guiry would go on to score a hat-trick in the 8-0 win.

Clonmel Town hit Second Division Galbally United for eight goals to comfortably advance to the next round of the Tipperary Cup on Sunday last in front their supporters at Ferryhouse.

Last year’s finalists got off to the perfect start when Ian Cleary beat the offside trap to slot home after only a minute and before Galbally United  had time to clear their heads Keith Guiry pounced to make it two.

Guiry and Evan McGuire made it three and then four inside 25 minutes with the home side utterly rampant, and things got even worse for the visitors a minute before the break when Cleary pounced again to make it 5-0 at the break.

To Galbally United’s credit they kept going and stemmed the tide for a period in the second half but with Town utterly dominant in all areas of the pitch it was only a matter of time before they added to their first half tally.

The sixth goal inevitably came on 65 minutes when Ian Cleary completed his hat trick, volleying home when left unmarked inside the six yard box. Not to be outdone, Guiry also got his third of the afternoon, placing his header beyond the hapless keeper after great work from Richie Crowe with 15 minutes left on the clock.

With time almost up Evan McGuire was fouled at the edge of the visitors penalty area and Keith Browne stepped up to curl the resulting free quick into the far top corner to complete a very comfortable win.

This game had a real feel of a local derby and started with both defences on top giving very few away chances at both ends of the pitch. This all changed on the half hour mark when the visitors opened the scoring after Robbie Costigan rose highest at the back post to put the Park following a pin point cross from the right.

Three minutes later however, the hosts James Mulcahy had the team’s level when he produced an excellent strike from the edge of the area which gave the Park keeper no chance.

But that wasn’t the end of the first half scoring as with minutes left before the break, Cahir’s Jack Duggan produced some fine individual play before finding Ger Quinn who side footed home from close range to give his side the advantage at the break.

And Quinn made absolutely sure that his side would be progressing to the next round when he added a brace of goals within three minutes just before the hour mark, the first being a poachers special from close in, before completing his hat trick from the penalty spot minutes later. 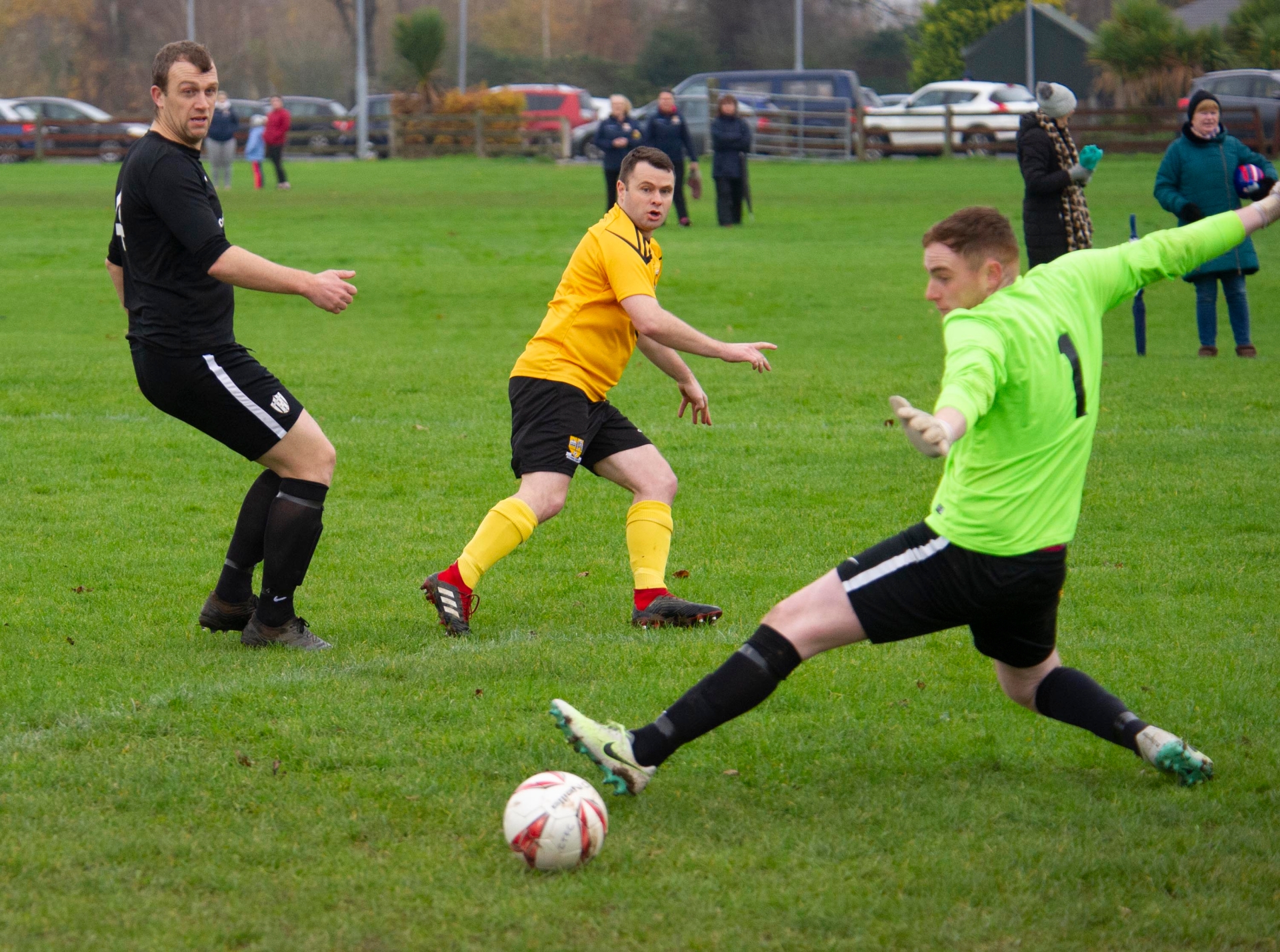 Ian Cleary (Clonmel Town) scores the opening goal in his side’s 8-0 win over Galbally United in the Tipperary Cup when slipping the ball past Galbally United keeper Adam Crowe. Cleary went on to score a hat-trick.

Peake Villa’s second hosted Third Division Moyglass United on Sunday at the Tower Grounds looking to continue their good cup form, and started brightly when almost scoring in the second minute after Adam Garrett was put through to face the visiting keeper who saved well from the striker’s effort. John Walsh and Robert Jordan also had chances but the Moyglass keeper was in fine form, and kept them at bay.

However, the home side’s efforts were rewarded on the 27th minute when they forced the visitors into conceding a penalty that was despatched to the net by Jordan to put the home side in front.

Totally dominant now Villa extended their lead shortly before the break when Kevin Patan’s through ball opened up the United defence and Robert Jordan smashed to the roof of the net for his and his side’s second goal.

The second half began the same with the Thurles side on the front foot and had a couple of chances through Colm Breen and John Walsh but keeper made the saves. But Peake Villa they were rocked back on their heels on the hour mark when the visitors had a quick counter attack and scored when a mistake in the Villa defence allowed their striker to give Lorcan Cummins no chance in home goal.

Four minutes from the end a good run from Patan through the heart of the visitors defence set up Colm Breen to make it 4-1 to Villa and in the final minute after the keeper fumbled a John Walsh shot Kevin Croke was on hand to make it 5-1 to the home side who thoroughly deserved their spot in the next round.