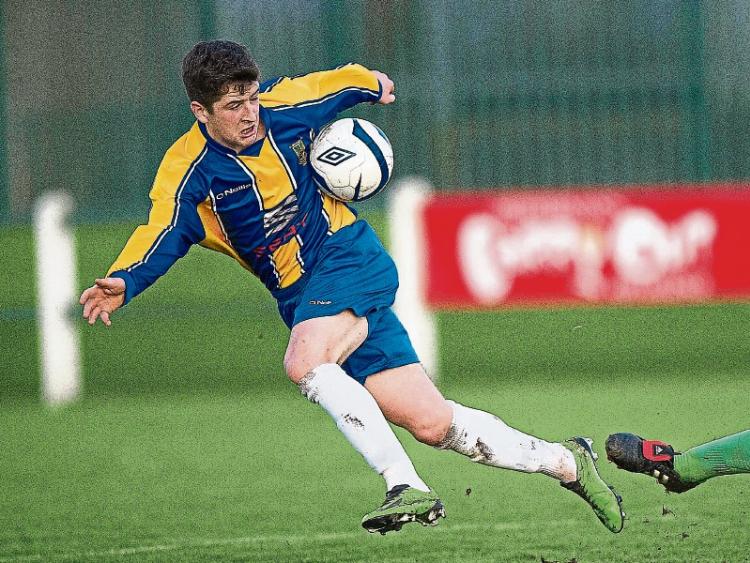 Russell Quirke who scored a first half hat-trick for St Michael's in their 12-1 win against Clonmel Celtic on Sunday last.

Clonmel Celtic’s wretched season probably hit its nadir on Sunday when it shipped one of the biggest defeats in the club’s history to a rampant St Michael’s side.

Right from the beginning the home side were in complete control and it only took four minutes for the Saints to open the scoring when Russell Quirke fired home from close range after Willie Armshaw pulled back a Jimmy Carr cross. Sean Guerins made it two on 13 minutes and Quirke added his second and his side’s third on the half hour when he converted a  Slattery cross.

To their credit the visitors continued to try to attack and made it 3-1 in the 32nd  minute when Jack Purcell evaded DJ Cremmins and his shot bounced over the dive of Adrian Walsh. But David Slattery made it 4-1 with a good finish on 40 minutes and Quirke completed his first half hat-trick minutes later to make it 5-1 at the break.

Jimmy Carr did well to finish from an angle to make it six after he had rounded goalkeeper Aidan Lonergan following a John Connery pass, and Slattery made it seven when he headed home a Jimmy Carr cross just after the hour mark.

The same player got the eight from the penalty spot after John O’Brien had been fouled on 68 minutes.

And he got his fourth before three late goals from substitute Gavin Dillon and John Connery and Jimmy Carr gave the Saints a large, but largely facile win.