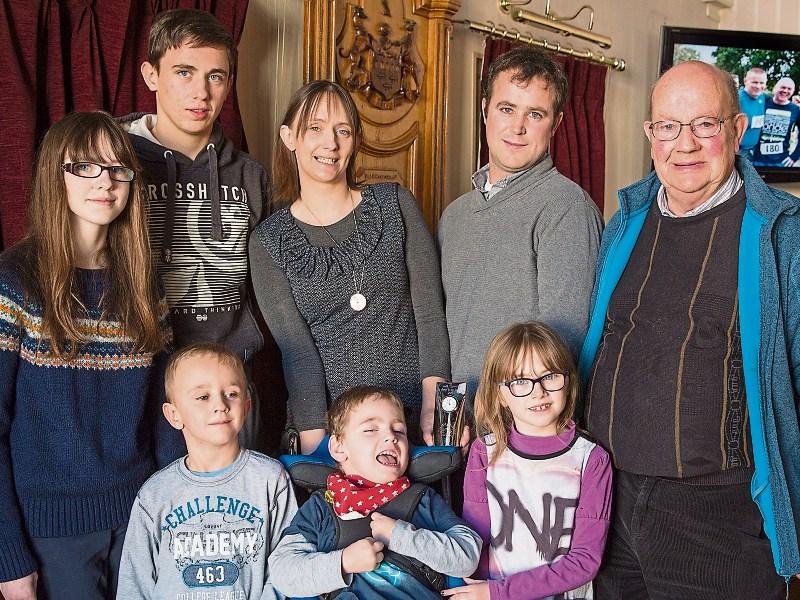 Killenaule parents Maggie Butler and Michael Power are calling on the Government to reinstate the mobility allowance so that their son can continue attending school and hospital appointments.
Five year old Alex Butler, a twin to Adam, was born at 27 weeks. He has spastic quadriplegic cerebral palsy, epilepsy, sleep apnea, vision impairment and is tube- fed. Alex spent last Christmas and New Years in Temple Street Children's University Hospital on a ventilator fighting for his life.  He requires 24/7 care, can’t travel in a car seat and needs to be accompanied by a nurse.
Maggie was presented with the South Tipperary Carer of the Year award at a special ceremony in Clonmel Town Hall on Friday last, November 4. She told The Nationalist that she isn’t getting adequate resources to care for her son. Their 2008 Renault Trafic was purchased two years ago, has clocked up over 230,000 kms and is on it’s last legs. The family had to take out a loan with the Credit Union to fund the car and still have two years of repayments left. They fear the destructive effect it will have on Alex’s development if the car breaks down.
A roadworthy wheelchair accessible car is an “absolute necessity” in order for Alex to continue attending up to three hospital appointments per week and Scoil Aonghusa in Cashel. She hopes that a meeting with Minister of State for Disability Issues Finian McGrath can be arranged to coincide with the national carer awards on November 16 or shortly afterwards to discuss the challenges they face on a daily basis.
“It’s  constant battle for services and grants such as the mobility grant which Mattie McGrath and councillors Imelda Goldsboro and Richie Molloy are helping us with,” Maggie explained.
“Alex gets up at 6am for school where he has a physio regime, speech and language … After school, Alex goes in a standing frame to help with his hips. We monitor him for seizures all the time,” she informed.
Maggie said it’s “lovely” to be awarded South Tipperary Carer of the Year and thanked everyone for attending the ceremony. She also praised Alex’s twin Adam, sisters Megan (8) and Caoimhe (13) and brother Dillon (15) for helping out. “Alex responds very well to them,” she smiled.
In nominating Maggie for the award, Carrick-on-Suir carer Michelle Russell highlighted her admiration for Maggie. “She dedicates her life to her partner Michael and her children. She does an amazing job with Alex and will go to the end of the earth and back for him. In spite of all this Maggie has the time to fundraise every year for the Jack and Jill Foundation and other children’s charities,” she noted.
Family Carers Ireland area manager Cllr. Richie Molloy paid tribute to the “unbelievable” care and dedication Maggie has shown her son, before pinpointing the problems carers with children who have special needs face.
“It’s personal stories like Maggie’s that register at Government level,” Cllr. Molloy highlighted.
“Carers in Maggie’s position know that there are hardly any resources available. Any carer that has to attend Our Lady's Children's Hospital in Crumlin understands how difficult it is to get to Dublin for a start off. As an organisation we’re very strong on the fact that the site which has been earmarked for the children’s hospital is definitely in the wrong place, especially for people in rural areas such as Tipperary. How are these people going to get there? We call again on the Government to review that decision and change the position of the site,” Cllr. Molloy continued.
Independent TD Mattie congratulated Maggie, before calling on Minister Finian McGrath to immediately escalate Government efforts to introduce a revised version of both the mobility allowance and motorised transport grant schemes. “I can see the constant fight Maggie and Michael have on a daily basis to get anything. At the moment it’s the mobility grant which was axed in 2013. We take for granted [being able to put our kids and grandchildren] into cars, drop in the car seat and away we go. We don't realise that they need to have a specially adapted car. It shouldn’t even be a question; they should be entitled to the mobility grant as simple as that,” he voiced.
Deputy McGrath later said: “The minister has informed me that the legislation required to introduce the new schemes is still only at draft stage. This will come as a severe disappointment to all families, like those of Alex Butler, who have been hit hard since the sudden closure of the schemes three years ago”.
Family Carers Ireland regional manager Pat Grogan also criticised the lack of resources for children with special needs. “Medical cards for children have been introduced in recent years, but this needs to be extended to kids with special needs. We’re lobbying for the therapies a child needs to be included. It’s a wrong situation that needs to be addressed,” he voiced.
Mayor of the Clonmel/Cahir Borough District  Cllr. Andy Moloney said Maggie is a “well worthy recipient” of the award, but suggested that it’s only “small comfort” for what she has to deal with daily.
“It's a great honour to have won the award, but it works out at 29c an hour for the average carer. It’s a voluntary organisation, and the day that volunteers and carers put down tools and say ‘we’re not caring’ our health system will reach a stand still.
“Maggie needs the mobility grant and the car to do what she needs to do and have some bit of pleasure in life. Hopefully a meeting with the minister will have rewards,” Mayor Moloney concluded.