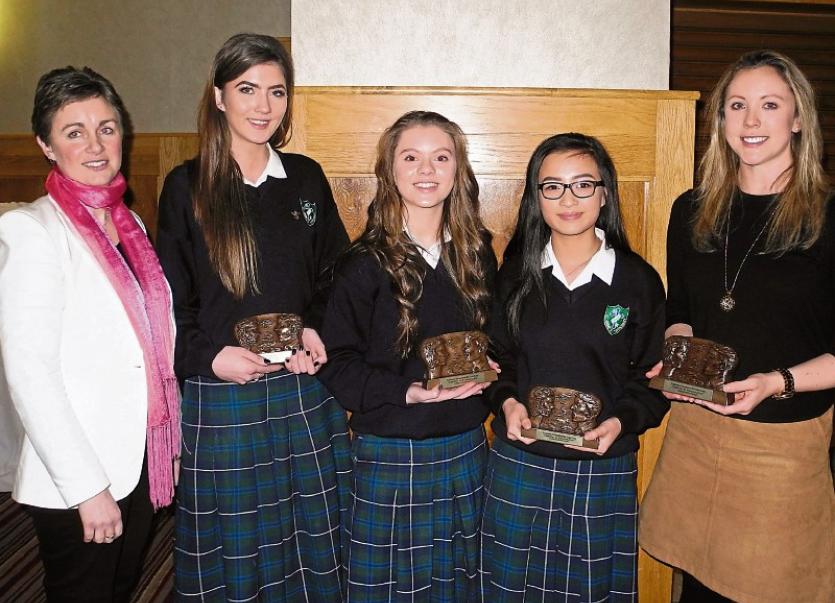 The junior  debating team from St. Anne’s Secondary School are the talk of Tipperary Town following their win at the recent regional final of Comórtas an Phiarsaigh, the annual competition organised by Gael Linn for second-level schools nationwide.

The event took place in the Hibernian Hotel, Mallow, on Tuesday 31 January last.

The St. Anne’s students proved their points on the motion, ‘Tá an iomarca béime ar acadúlacht  i meánscoileanna na hÉireann!’ (Too much emphasis is placed on academic ability in Ireland’s secondary schools!), in a closely fought debate with teams from  Pobalscoil Eoin Baiste, Hospital, Coláiste Mhuire, Crosshaven,  and Coláiste an Chroí Naofa, Carrignavar.

The young Tipp orators can be proud in the knowledge that they have qualified, from over 150 schools who entered the competition at the beginning of the school year, for the All-Ireland final in mid-March. As it happens, they will be in contention with the Ursuline Secondary School in Thurles at the event.

Teachers Maria Hayes and Niamh Ní Riain, who have guided the team to victory in their various heats since November last, are proud of their students marvellous achievement – the first time the school has reached the All-Ireland final in this competition.

Later on that evening, the senior team from Laurel Hill Secondary School, Limerick,  greatly impressed the adjudicators with their well thought out and passionate speeches on the topic ‘Annus Horribilis a bhí sa bhliain 2016!’ (2016 was an ‘Annus Horribilis’! ) and were declared winners also.   Their opposition included teams from Coláiste Íde agus Iosef, Abbeyfeale, Presentation College, Cork, and locals St. Mary’s Secondary School, Mallow.

Congratulating the winners, Jamie Ó Tuama, Gael Linn, thanked the teachers for their help and dedication in preparing the teams. “Gael Linn has always believed that pupils should acquire good levels of competence in spoken Irish, and the level of entry in the competition, combined with excellent  performances from the participants,  bear testimony to an increased emphasis in schools on developing students communicative skills,” he added.