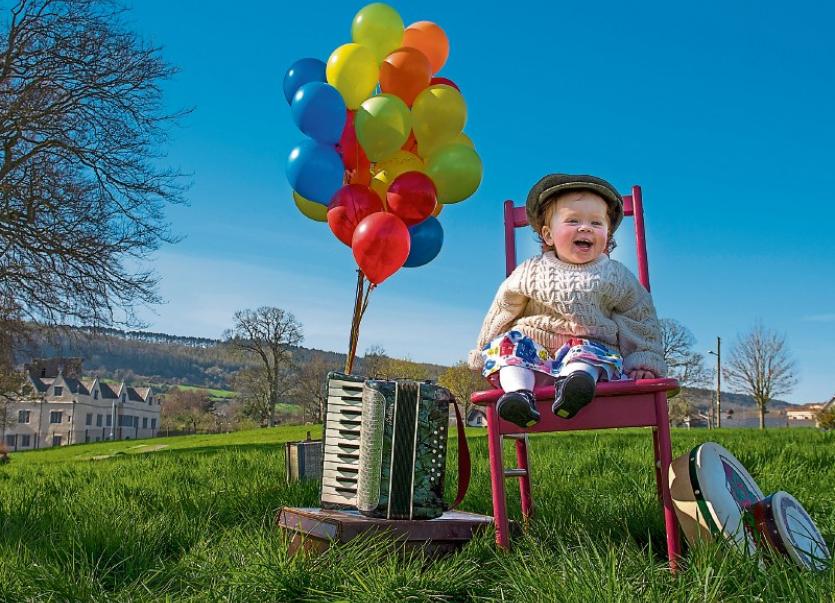 18 month old Molly O'Driscoll can't wait for the Clancy Brothers Festival in Carrick-on-Suir across the June Bank Holiday weekend, May 31 to June 5.

Plans are well underway to celebrate the 10th year of the Clancy Brothers Festival of Music and Art in Carrick-on-Suir across the June Bank Holiday weekend, May 31 to June 5.

With music in the theatres, pubs and on the streets, the River Festival, the Art Trail, drama, workshops and family fun, this year’s festival promises to be unmissable.

Music highlights will include concerts by Eleanor McEvoy, Robbie O’Connell and Dónal Clancy in the Brewery Lane Theatre, and the return of The High Kings to the Strand Theatre.

The ever-popular River Festival returns to Seán Healy Park with fun for all the family and an outdoor stage featuring Jig Jam, Newfoundland and The Backyard Band.

There will be more music on the Pub Trail than ever before, youth busking in the streets, nature and heritage walks, lunchtime theatre at the Brewery Lane, the Clancy Brothers Songwriting Competition concert featuring ‘A Song for Carrick’ and surprise guests, music and drama workshops for all ages, a food fair, the Eoghan Power Memorial ballad singing competition and the ever-expanding Art Trail showcasing emerging and established artists from across the South East including the exciting new interactive multimedia arts project, ‘If These Chairs Could Talk’.

Songwriters are invited to enter a new category in the Clancy Brothers Songwriting Competition.

First prize is €200 and the runners up win €50 each, sponsored by the Carrick-on-Suir Business Association, the Clancy Brothers Festival of Music and Art and The Tudor Artisan Hub. The closing date for ‘A Song for Carrick’ has now been extended to Friday, April 28.

The main Clancy Brothers Songwriting Competition is also open for entries. With prizes including €500 cash sponsored by IMRO, studio time at Crossroads Recording, Kilkenny, and CD Duplication by Duplication Ireland, it is one of the biggest songwriting competitions in Ireland. The two runners up also receive €250 each so no one leaves empty handed. The closing date is Friday, April 14.

The finalists for both competitions will perform their songs at a concert during the Clancy Brothers Festival of Music and Art 2017, after which the winners will be announced.

Entries to competitions can be submitted through the website at www.cbsongwriting.com or posted to The Tudor Artisan Hub, 42 Main Street, Carrick-on-Suir, Co. Tipperary.

With a full programme of unmissable events and fun for all, the 10th Clancy Brothers Festival of Music and Art is sure to be a hit, so mark the date and come celebrate!