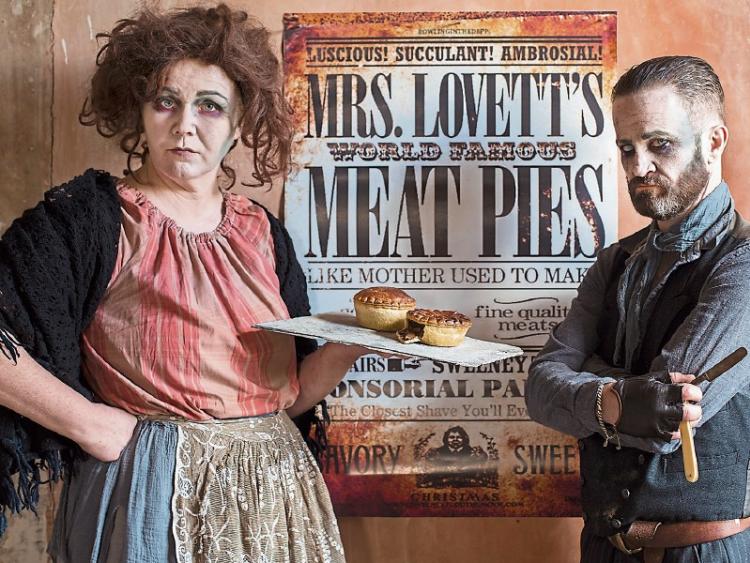 Unanimously acclaimed by critics as one of Stephen Sondheim's most powerful scores, this black comedy concerns the homicidal career of Sweeney, falsely imprisoned by a Judge who covets his wife. Cheated of his revenge against the Judge, Sweeney - with the aid of his razor - exacts a far more terrible revenge, cheerfully helped by Mrs. Lovett who is delighted to give new life to her flavourless meat pies.

This will be the first time Sweeney Todd has been staged in Clonmel. The production is being produced and directed by Michael O'Donoghue, along with musical director/chorus mistress Laura Cotter, set design by Diarmuid Vaughan and the assistant to the director is society stalwart Margaret O'Sullivan.

Sweeney Todd is, of course, a Victorian serial killer, though his exploits predate that very modern label. He is, moreover, probably one of London’s most enduring villains. In recent years, Sondheim’s portrayal of Todd has done much to keep his name alive.

An unlikely Broadway hit in 1979, blending elements of comedy and horror, it introduced the character to the United States, garnered legions of fans and ultimately made a relatively obscure piece of London folklore world famous.

Yet, in the UK and Ireland, we have always enjoyed the antics of this particular monster in film, television and theatre – Ray Winstone took the title role in a BBC version as recently as 2006 – and discerning visitors can even enjoy a Sweeney Todd ‘attraction’ at the London Dungeon.

But where does the tale of the butchering barber originate? It has long been assumed that Todd’s fictional exploits were based on a true story. Many people are still convinced that Todd’s crimes were as real as those of Jack the Ripper. The facts, however, are somewhat different.

The story begins in the 1830s with one Edward Lloyd, an enterprising publisher of ‘penny dreadfuls’ who aimed his cheap weekly serials squarely at the working poor. Titles like ‘The Calendar of Horrors’ and ‘Varney the Vampire’ (a famous blood-sucking fiend 50 years before Dracula) give some idea of his subject matter. He also specialised in pirated versions of Dickens' works at a time when copyright law counted for little.

Lloyd would later discover a radical/liberal newspaper and become quite respectable.  Nonetheless, his main legacy to modern culture was a story called ‘The String of Pearls’ published in a weekly magazine during the winter of 1846/47, written by an anonymous penny-a-word hack.

Set in 1785, it features principal villain Sweeney Todd, ‘a long, low-jointed, ill-put-together sort of fellow’,  and includes all the plot elements that have been used by Sondheim and others ever since. There is the barber’s shop, from which a remarkable number of customers never return courtesy of a chair that flips them upside down, plunging them to their deaths in the stone-floored cellar. An ill-used apprentice boy is consigned to a lunatic asylum, while a pair of star-crossed lovers (obligatory in any Victorian popular fiction) and the enterprising Mrs Lovett whose pies are finally discovered to contain something rather more exotic than mince add to the spectacle.

St. Mary's Choral Society has assembled a first class line-up for the many parts in this wonderful musical, including Diarmuid Vaughan, winner of the 2011 AIMS Best Actor Award, who plays the title role of Sweeney Todd. Making a very welcome return to the stage in the role of Mrs. Lovett will be Olwyn Grogan and the role of Tobias Ragg is being played by Tipperary Town's John Sharpe who is making his debut with St. Mary's Choral Society in this production. Emmet Donlan reprises the role of Anthony which he played with Carrick-on-Suir Musical Society a few years ago, Sinead O'Donovan plays Johanna, David Hughes plays Judge Turpin, James Sweeney is Beadle Bamford, Michelle Smith plays the Beggar Woman, James O'Donovan plays Pirelli, Ricky Dunne is Jonas Fogg, and the Bird Seller is being played by David Hogan. A host of familiar faces will make up the supporting cast of aristocrats, People of London amongst others.

The opening performance on Sunday 23rd April is a gala performance in aid of of Family Carers Ireland’s Clonmel Branch and tickets for this showing are  available from the Family Carers Office at 8 Sarsfield Street, Clonmel. Tel: 052-6170455.