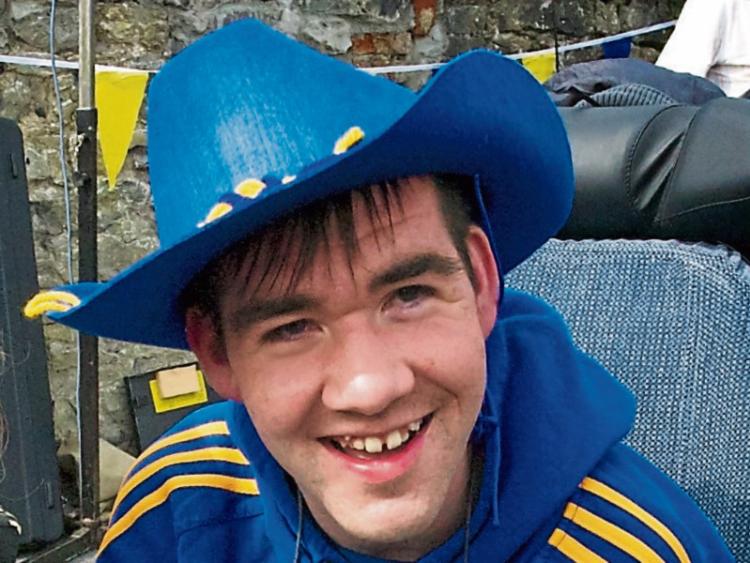 The late Daniel Gubbins was laid to rest on Thursday in Golden.

Mourners gathered at the Church of the Blessed Sacrament in Golden on Thursday (September 14) to celebrate the life of a 25-year-old who has left a “massive legacy” on Tipperary and communities across the world.

A powerful advocate for the  disabled, Daniel Gubbins passed away on Monday morning surrounded by his loving family at his home in Thomastown, Golden.

Daniel adored music and its ability to bring people together, and it was fitting that symbols including an electric microphone, a set list and a poster were brought forward by loved ones as some of his favourite songs rang out, along with a clock because he loved to plan “sneaky” cups of tea.

Daniel’s brother Shane then paid a heartfelt tribute. "He had a sense of determination unlike anything I have seen which is all the more remarkable given his physical and neurological disabilities.

“Those disabilities that you and I could see in Dan are things that he could not see in himself. They were irrelevant to him and he never let them get in the way of his goals," proud brother Shane told mourners.

Shane praised Daniel for learning to talk, sing, eat solid food, speak German, add and subtract, read, ride horses, and garden. Daniel extraordinary learnt to swim unaided with the use of one hand and minimal leg movement. But Daniel's drive and determination went far beyond that list. "He was constantly forward thinking - go, go, go and never look back. Look up the phrase 'think big' and you'll find a picture of Dan Gubbins.

"Things were never done by half. If a footpath wasn't to his liking or a building wasn't accessible enough he didn’t write to the council to seek resolution like you or me. No, he tracked down the number of every councillor he could find, rang them and asked them the pointed question - 'what can you do for me?'.

"He voiced a radio campaign against dog fouling and chewing gum being discarded on the street instead of moaning about it under his breath,” Shane continued.

Shane took pride in Daniel’s passion for music. "Sing songs were an unknown concept. He never participated in them, they were beneath him. Dan only did gigs in world famous venues like Cashel Palace and St. Martha's Nursing Home with the help of renowned backing from the likes of the Men's Shed band … And when he first got sick Dan was already too busy planning his comeback tour- 'The World Tour of Tipperary'".

Shane said Daniel was an “incredibly complexed” individual. “An enigma as the late, great, dearly missed Eddie McGrath once called him. In order to spend any sustained length of time with Dan you had to be a trained psychologist in order to figure out what on earth he wanted, a bomb disposal expert to diffuse often explosive outbursts, and a world class negotiator in order to safely wrestle the remote from his grip. Few people in this world possess those abilities, but we are lucky to be joined by a number of them here this morning".

Shane thanked his mother Mags whose relentless love and fight shaped Dan into the beautiful young man that was loved by all; Sarah Morrissey for her guidance, friendship, and close connection during Dan’s Scoil Chormaic days; and Dan's close friend Tony Lyons who worked with him on a one to one basis over the last six years. "Daniel was a truly remarkable young man, and I must have said this a hundred times the last few days but if my generation had a fifth, a tenth or even just a hundredth of his sheer drive and determination and passion for life as the man resting here before us today I can guarantee you that there would be a cure for cancer, an end to world hunger, and free tea bags for all.

"Dan faced countless bumps in the road - blimps as he liked to call them throughout his 25 years, but rather than let anything consume him Dan chose to live and in doing so left a massive legacy that centres of sheer determination and achieving your goals. He lived an extraordinary life accomplishing extraordinary things and unfortunately he's left an extraordinary void to be filled. No single person can fill the void left in our hearts and our lives, however I do believe that in time it will be partially patched by honouring Dan's legacy as a collective community of family and friends.

“Set your goals, achieve your dreams and live life to the absolute fullest to live up to his legacy. But first, 'Mum, can I have a sneaky cup of tea?',” Shane added.

On behalf of the staff and students at Scoil Chormaic in Cashel and Northfields, Sarah Morrissey highlighted how Daniel has "enriched all of our lives in countless ways and will continue to inspire us to be better, honest and live life to the fullest".

She praised his "unique personality" and "filter free honesty", recalling what a five year old Daniel was like when they first met. "He was the most charming, sweetest little thing I've ever met. He was asking me in his old man manner all about myself and telling me all about himself".

Sarah said Daniel made an impression on everyone he met. “He never cared for rank or class, if you were a teacher, principal, an offending dog on the street or even the archbishop - Dan gave it to you straight up right between the eyes".

Sarah fondly recollected teaching Daniel for four years. Writing strongly worded letters became an early feature of Daniel's English curriculum, and he penned to Westlife’s Kian Egan looking for money for a swimming pool.  "We had a ball. We had a lot of fun, he did a lot of work and we had an occasional battle, sorry I shouldn't lie in the church, we had a daily battle of wills and he won out. He taught me so much about teaching, about learning and making it relevant to life".

Sarah recalled Daniel's "unique and charming" way of winning people over. "He was so determined in everything he wanted to do and gave it 200%. He focused on something and his internal drive to do it and achieve it was remarkable. So you can imagine my fear and apprehension when Daniel set his mind on driving his wheelchair down the stairs - a stairs that was directly located outside my classroom door. We talked about it, we hypothesized, I gave him every possible negative outcome to scare him off the idea but he quite literally laughed in my face. 'Imagine Dan you'd come flying out of your wheelchair and I'd have to call Mags and tell her you're hurt, she'd be so sad'. 'Not at all she'd be delighted - we'd get a defibrillator for the school and a drive in the ambulance. She'd love it'," Sarah narrated.

Daniel had an "unmitigated passion for music" and a "beautiful" voice. "He was a talented star of so many Scoil Chormaic productions even after he graduated,” Sarah noted.

Sarah admired Daniel's lust for life and adoration for his family. She commended Daniel’s family including mother Mags and brothers Shane and Dylan for their love, care and support which helped him surpass all expectations. "Daniel's life was way too short, but my God wasn't it an adventure. Dan was suppose to be so limited yet he lived life without limitations … He lived life like a bright spark, like a blaze of glory, to the fullest.

"To quote him himself and we have it in black and white - 'You are the bravest mam I know',” she added.

Sarah finished with the words of Daniel's new backing singer in heaven,  Freddie Mercury. “‘I want to be a rockstar. I will be a legend. I always knew I was a star and now the rest of the world seems to agree with me'," a heartbroken Sarah concluded.

'Things would be so much worse without carers'