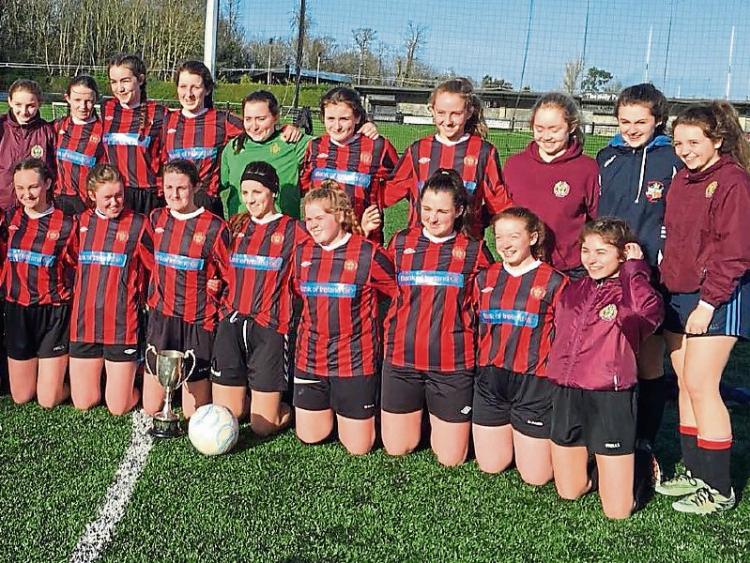 Cahir Park was the venue for the 2018 Munster Senior A soccer final as Presentation Thurles welcomed reigning All-Ireland champions Rathkeale to Tipperary.

Rathkeale set the early pace with a flurry of attacks but Presentation defence marshalled by Katie Ryan and Kate Cavanagh stood firm. Irish international Aoibheann Clancy began to gain a foothold in midfield, allowing her Presentation Thurles side to grow into the game and it was her defence splitting ball which created the opening goal as she released Queva O'Meara who in turn squared for Lauren Mccormack to fire home.

Rathkeale were rocked by this setback and Presentation Thurles pushed for a second, with two quick fire efforts from Aoibheann Clancy and Casey Hennessy narrowly missing the target.

On the stroke of half time, Presentation were made to rue missed opportunities as Rathkeale’s Anna Mullane capitalised on a defensive error to fire home from a tight angle.

Presentation Thurles emerged for the second half determined to regain the initiative and laid siege to the Limerick goal. Having been denied by the post and a goal line clearance, their persistence eventually paid off when the impressive Aoibheann Clancy scored direct from a corner after a wicked delivery evaded the Rathkeale net minder.

Presentation Thurles would again find out exactly why this Rathkeale side were All-Ireland champions as the Limerick girls once again grabbed themselves a lifeline with ten minutes remaining when a fiercely struck effort from all of 25 yards flew past the Presentation keeper Rachel Sweeney.

With extra time looming large, Presentation Thurles had one more push in them. The tireless Casey Hennessy latched onto another Clancy pass and fired past the Limerick keeper to spark wild celebrations as the Thurles players and supporters sensed this blow might prove to be fatal. Katie Ryan’s defence was not for passing and Presentation Thurles were crowned Munster champions once again.