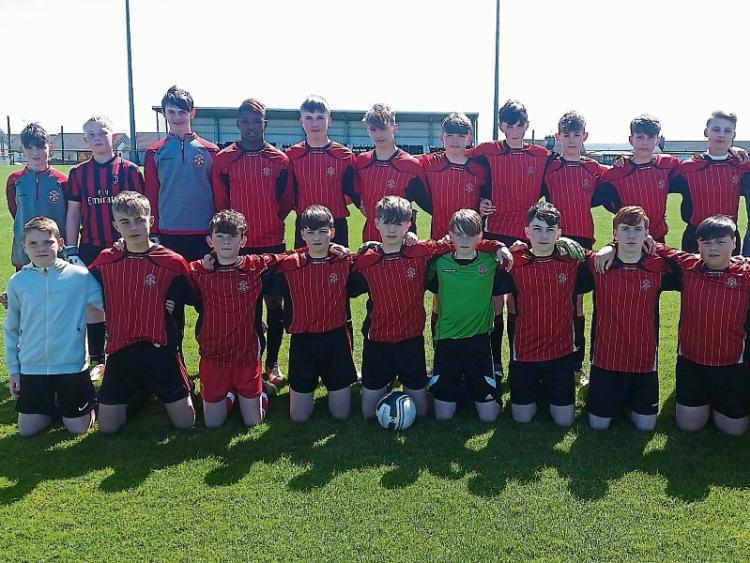 Coming into the final on the back of two big wins, confidence was sky high amongst the CBS players and that confidence shone through on the pitch from the off. Josh Hegarty was the first to try his luck but his near post effort was saved by the Tramore keeper. After some great build up play, Hegarty teed up captain Senan Campbell whose first time effort was again well saved by the keeper.

CBS were dominant in midfield with Aidan Wells and Fabian Urbanski breaking up play and setting up attack after attack and soon their pressure paid when the lively Jack Hegarty was taken down in the box. Up stepped Ronaldo Kivankufi to smash home his 10th goal of the competition from the spot.

Tramore found it difficult to get going and moments later found themselves 2-0 down courtesy of a truly magnificent strike from Hegarty. Following some great play from Ronaldo Kivankufi, Senan Campbell and Jack Hegarty, the ball rolled into Josh Hegarty’s path on the edge of the box and with the outside of his right boot he curled an unbelievable strike over the keeper into the top corner of the net.

Tramore were shell-shocked and a minute later were 3-0 down as Ronaldo Kivankufi scored his second of the day from close range following another flowing passage of play.

Daryl Hanrahan and Sean O’Meara were very calm at the back and full-backs Owen Dunne-Harrigan and Gavin Flynn were causing lots of problems for Tramore down the wings.

But a lapse in concentration just on the brink of half time gave Tramore a lifeline when CBS failed to clear a free kick and the ball was well finished to the top of Bill Nolan’s net.

Tramore hit the ground running in the second half and were dominating possession, but Daryl Hanrahan’s composure on the ball enabled CBS to get a foothold in the game and regain control.

Bill Nolan was dealing very well with any efforts from distance, and Gavin Flynn produced a saving tackle in the box with 10 minutes remaining. Senan Campbell thought his finish from 20 years had put three up again but the referee had blown the whistle for an injury to the Tramore keeper.

CBS’s fourth goal came soon after when Darragh Dowd won possession up front and when Jack Hegarty released Josh Hegarty on the right his shot deflected in to seal the victory. Moments later when Kieran O’Donnell and Scott Healy-Nolan combined well down the right wing, the ball came infield to Fabian Urbanski who burst through the Tramore defence to expertly chip the keeper from 25 yards out, a brilliant goal to cap off a brilliant performance.

Great scenes followed from the CBS boys at the final whistle. Fabian Urbanski was named FDC man of the match and received a trophy from referee James O’Neill, before Senan Campbell was presented with the cup from Dave Allen of Tramore AFC.