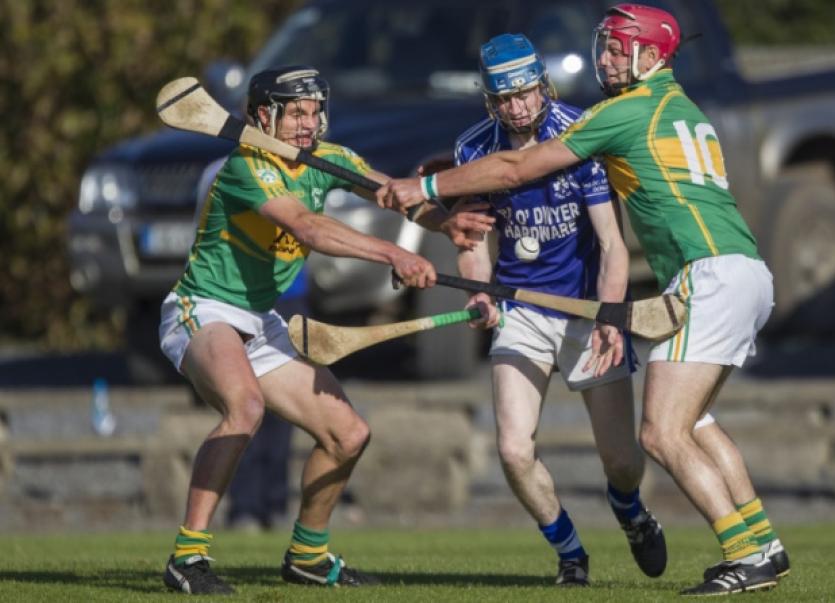 With the preliminaries over the quarter-finals draw us to the Stadium next Saturday and Sunday.

With the preliminaries over the quarter-finals draw us to the Stadium next Saturday and Sunday.

Sarsfields and Nenagh Eire Og is the standout pairing, as the title race hits the home stretch.

Championship favourites Sarsfields had to come from behind to eventually overhaul fourteen-man Drom and earn their visa to the quarters. The dismissal of James Woodlock (inset) in the first half and Lar Corbett’s personal input of 2-5 were among the more significant aspects of the game.

Woodlock’s dismissal came just over halfway through the first half. He might have escaped with a yellow for the frontal tackle on county minor Billy McCarthy but his involvement in the follow-up made it easy for the referee. It was one of those moments of rashness that cost his team and ultimately skewed this game.

Drom reacted well to the setback and got to the interval still four-up, Corbett’s trademark first goal the only major breach of their defence. Indeed they continued to frustrate the Blues in the second half despite another major from Corbett. It looked like the Mid champions might pull off an extraordinary win but the dam eventually burst in the final minutes.

A careless loss of possession by Seamus Butler led to Sarsfields’ third goal, finished by Richie Ruth. It was the critical score and once a Stephen Cahill point eventually nosed them ahead the encore had a blue tint. They could do little wrong in the final few minutes, though Drom got a consolation strike very late with a goal from sub Robbie Long.

It was a big win for Sarsfields, reversing an earlier outcome in the Mid. Padraic Maher as the extra man in the defence played a major role in the outcome, though there was much to admire about Stephen Maher also at the defensive end. They’ve a youthful midfield in Stephen Cahill and county minor Billy McCarthy. For once Lar Corbett delivered spectacularly for his club and they could be grateful for his input on a day when others were subdued. Pa Bourke’s hurling seems to have suffered by his removal from the county panel.

Drom will regret this one. The player deficit ultimately proved too much on a day when Callanan got little space from Mickey Cahill and the extra man in front of him. Johnny Ryan and David Collins hit some of their sweetest points.

Sarsfields will be fancied against Nenagh in the semi but hardly to the extent of the betting odds for outright success, which have Sarsfields at 8/11 and Eire Og at 7/1. Those digits would suggest a one-sided event but in truth this has the potential to be a cliff-hanger. Nenagh knocked Sars out last year and this time they come to Thurles as North champions; they disposed of Kilruane MacDonaghs last week. It should be a weekend highlight.

The opening game at the Stadium last Sunday saw Templederry withstand a second half rally by Moycarkey. The North side was well in control by half time, with Adrian Ryan a key player in building their interval lead of eight. Eventually James Bourke switched in on him to good effect.

Dogged Moycarkey came strongly in the second half, with Rory Ryan a key player from midfield. They pared back the lead to a mere three points but couldn’t push on. Kieran Morris appeared to be struggling and the absence of his usual input was critical.

Templederry were forced to bring Adrian Ryan outfield in the second half where he won some crucial possession in the last quarter. The excellent full back play of county Intermediate Christy Coughlan was a critical factor too. These steadied the Kenyons ship and they got home safely, even when Peter Kinane came on and flicked in an instant goal for the Mid-siders.

Templederry’s prize now is an all-North quarter-final with Burgess. The latter edged out Borrisoleigh on Sunday last after taking Nenagh to a replay in the North final earlier. This should be a close one. Templederry are slightly favoured in the betting but I wouldn’t be surprised if Burgess got through.

The clash of reigning champions Loughmore and Clonoulty is quite a prospect too next Saturday at the Stadium. Loughmore ran up a huge tally against Ballina last week while Clonoulty exacted sweet revenge on Annacarty for their divisional defeat a week earlier.

The all-West game was won by a bubbly seven-up in the end but it did have its swings and roundabouts over the hour. In fact Eire Og got away to a very smart start and had the first two points. A Donal O’Dwyer goal endorsed that trend early on but then a very driven Clonoulty (it wouldn’t do to lose again to Annacarty!) hit back with a pair of goals, the first a scrambled affair and the second definitely put in by Timmy Hammersley. They led by eight at the interval.

The game threatened to peter out around midway through the second half but credit to Eire Og for sticking with the job. They pared a nine-point lead back to three, hitting some huge points in the process, and it took a save by Clonoulty goalie Declan O’Dwyer from his namesake, Donal, to avert a major crisis for the eventual winners.

In the end a John O’Neill goal eased all tension and Clonoulty were safely home. Annacarty won’t be too bothered, I suspect, they have the major local prize. John Quinn once again came on and scored a typical point; he’ll probably still be doing it when he has the travel pass.

For Clonoulty it rescues their season, at least for another week. They’ll be outsiders now against Loughmore so it’s a day to throw off the shackles and give it a lash. An over-reliance on Timmy Hammersley for scores is part of their difficulty so they’ll be hoping for a stronger input from others such as John O’Neill, Sean Maher and company. Conor Hammersley made some useful contributions last Saturday.

Down South Mullinahone did a repeat on Killenaule with Eoin Kelly the scoring star. It’s a real downer of a season for Killenaule, who at times seem to have a self-destruct button.

The South champions now have Kildangan in the quarters on Saturday. It might sound a favourable enough draw given the other options but the North side is quite a useful one; remember they took Nenagh to a semi-final replay last year. Mullinahone will be outsiders.

Finally, I can’t resist the irony of it all. I’m talking about Galway and the controversy that’s holding up their senior championship at the moment. It centres on a player who played in America during the summer and then returned to play for Turloughmore against Beagh in their county championship. There was an enquiry and the upshot was that Turloughmore were tossed out of the Galway championship by the county’s CCC. They’ve since taken their appeal all the way to the DRA and the issue has been sent back to Galway for resolution, which presumably offers Turloughmore a lifeline.

The irony? Well, Galway have never quite got over the so-called Keady affair of 1989. That was the year when centre back Tony Keady played in America and was then suspended for the All Ireland final against Tipperary. The lingering bitterness even surfaced in a match programme article earlier this year for the league game at Salthill. Referencing the ’89 defeat of Galway an unattributed piece concluded with the line, “not for the first time officialdom ended the reign of a great side”.

Indeed. Sentiments, I’m sure, that will find an echo in Turloughmore.