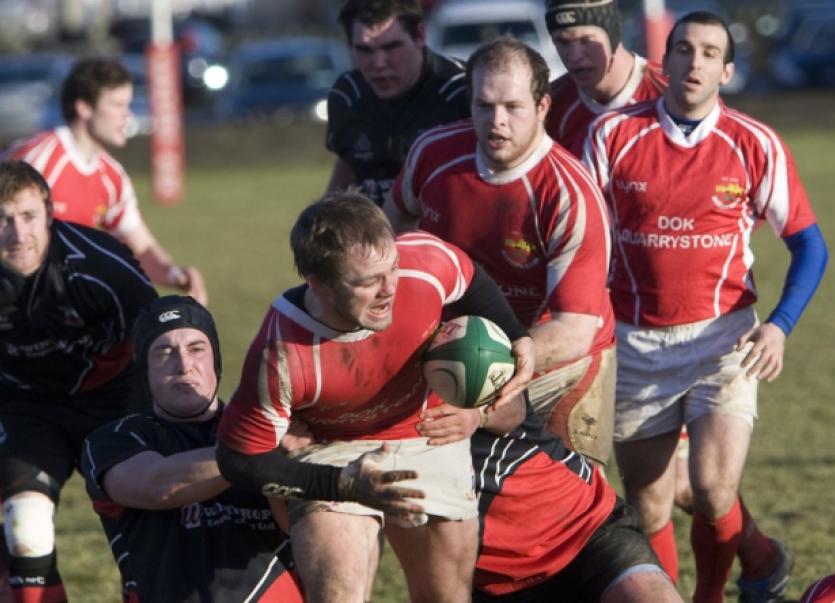 In Season 2002-2003 Cashel competed in Division 3 of the Munster junior League and won the competition on points difference from Charleville and Galbally.

In Season 2002-2003 Cashel competed in Division 3 of the Munster junior League and won the competition on points difference from Charleville and Galbally.

In that same season Ballymena won Division 1 of the All Ireland League six divisions above.

On Saturday they met at Eaton Park, Ballymena, in Division 2A of the All Ireland league. Ballymena has a long and proud history and produced many Irish internationals including British & Irish Lions, Willie John McBride, Syd Miller, Trevor Ringland and Steve Smith. When Cashel’s next history book is written Saturday’s one point 8-7 victory will rank among the club’s great achievements.

Playing with the wind Cashel attacked from the outset through the forwards and almost scored. Most of the play early on was in the Ballymena half but the heavy conditions and greasy ball resulted in many handling errors by both sides. The Ballymena backs were quick and on 13 minutes a tackle by Brian Silke saved a try as they were clear on the try line. Cashel missed a penalty on 15 minutes but continued to dominate with the backrow of Edmund Leamy, Brendan O’Connor and John Ed O’Connor being particularly prominent.

Cashel’s domination continued until half time but the excellent Ballymena defence stood firm. There was no score at half time.

Facing the wind in the second half was a daunting task for Cashel as it was felt they would have needed some scores on the board. The task was made more difficult after one minute when the Ballymena number 8 intercepted a Cashel pass on half way and raced in under the posts for a converted try.

The forwards once again took control. they rucked and carried and put their bodies on the line. In the front row ageless Danny Lambe, young James Maxwell and Niall Fitzgerald were outstanding. Cormac O’Donnell, another 20 year old played his part when introduced. In the second row captain Sean Walsh and Ailbe Devitt were outstanding.

Ailbe Devitt won the man of the match award, the first time a non Ballymena player received it since Alan Quinlan for Shannon. The backrow were awesome in the second half. Kieran Murphy, playing his first game in a long time due to injury was introduced and made a huge contribution. Alister McCormack also played his part. 12 minutes into the second half Darragh O’Brien kicked a penalty into the tricky wind. The Cashel pressure continued but with Ballymena defending stoutly it looked as if they would hold out.

The home side missed a penalty and Cashel cleared their lines. Aidan Barron showed maturity beyond his years at scrum half. Conor Quinlan at outhalf kicked excellently and marshalled his back line. Centres Brian Silke and Cedric Unholz tackled all day and hit many rucks. Wingers Darragh O’Brien and Kevin Leamy were busy in both defence and attack on a day not suited to wingers. Pat O’Connor was assured as ever and carried ball like a backrow. With two minutes left the Cashel pack drove over for a wonderful forwards try which was touched down by Kieran Murphy to put Cashel 8-7 ahead. They endured another 7 minutes of injury time but held out for a famous victory.