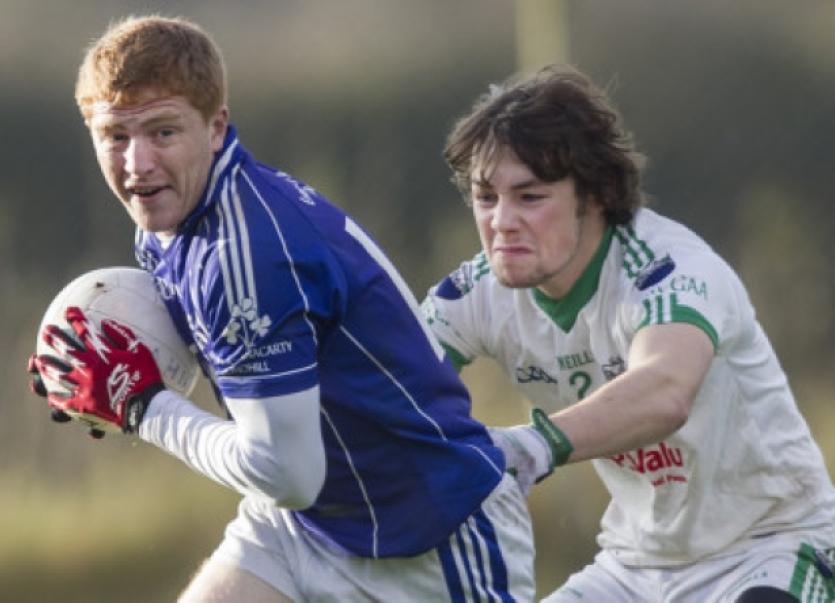 With his 13th point of the day, right at the end of extra-time, Damian O’Brien earned Eire Og, Annacarty a lifeline in this year’s county senior football championship.

With his 13th point of the day, right at the end of extra-time, Damian O’Brien earned Eire Og, Annacarty a lifeline in this year’s county senior football championship.

His 10th pointed free over the 80 minutes, almost three minutes in to time added-on, sent this absorbing game to a replay, just when it looked like Cahir would prevail.

Once again, and for the second time in a three-week period, a Tipperary Senior Football Championship game ended in a disgraceful scene with an unsightly fracas on the sideline. This time a spectator made his way to join in the fist-flying between opposing players and substitutes. The powers-that-be need to take a serious look at these matters very soon. What wouldn’t be tolerated in a public place shouldn’t be tolerated on a GAA field either. Someone will be seriously injured if this malaise is allowed to continue.

Up to that moment of madness two minutes before the referee’s final blast it had been a well contested game with little between the sides.

Eire Og for the most part had the greater possession and held the territorial advantage but Cahir with three goals at vital stages kept themselves in the hunt.

A slow first half belonged to the West side who were led from first to last by an outstanding display from team captain Brian Fox at centre-back. Magnificently he manned the centre berth and his incisive runs through the middle caused untold problems for Cahir.

Damian O’Brien opened the scoring four minutes in with a free, an exercise he repeated 10 times on the day as Cahir conceded way too many frees.

It was all of 14 minutes before Cahir opened their account when Paddy O’Flaherty, who put in an immense effort all through, kicked a fine point from 30 metres.

Referee David Grogan issued a black card to Annacarty’s Michael O’Dwyer shortly afterwards but Cahir missed the easy free which would have put them ahead. Before half-time they missed another pair of ‘handy’ frees which they would greatly  regret by day’s end.

Ronan O’Brien up from wing-back restored the advantage for Eire Og on 19 minutes. This was quickly followed by a free (won by a trademark  Brian Fox run)converted by Damian O’Brien to stretch the lead to 0-3 to 0-1.

Before the interval Damian O’Brien would kick another two points from play as Eire Og began to reap rewards for their dominance. The first came from a quickly taken free when Cahir defenders went asleep to the danger; the second at the end of a move involving Conor O’Brien and Willie O’Neill.

With the last kick of the first half Paddy O’Flaherty finished off a move involving Sean O’Connor and Padraig Whelan to leave it 0-5 to 0-2 for the West side at the break.

Something clicked in the Cahir dressingroom at the interval for they re-emerged a different team. Within 15 seconds Eddie Kendrick kicked a fine point after Liam Casey and Padraig Whelan combined. Whelan was making an impact since his introduction.

Within seven minutes of the restart Cahir scored two goals to put themselves ahead for the first time.

In the 34th minute Benny Hickey finished off a fine passing movement with a piledriver of a goal - he became more involved after a quiet opening half. Three minutes later a trojan Paddy O’Flaherty got on the end of another freeflowing movement to slam-dunk home a goal. The tide had turned and Cahir were flying at 2-3 to 0-7.

Eire Og’s response in this period was a pair of points - one a Damian O’Brien free the other a superb effort from Conor O’Brien with a left footed kick from 45 metres.

Interestingly over the 80 minutes all of Eire Og’s 15 points would come from the three O’Brien brothers.

In the next five minutes Damian O’Brien scored a further four points (three from frees) as the Cahir defence faced an onslaught from a wounded West side, restoring their advantage to 0-11 to 2-3.

Up came Cahir’s star performer on the day, Paddy O’Flaherty to score his third point, linking up with James McGrath and Padraig Whelan in the build-up.

An “iffy” point from a  Benny Hickey free that could have done with ‘Hawkeye’ left the sides level half-way through the second period, but it was about the only only rub of the green Cahir seemed to get all day.

Substitute Shane Murphy put the South side ahead with a well-taken point but drama quickly followed. Brian Fox once more soloed through the Cahir defence seven minutes from time to be hauled down by Robbie Costigan, already on a yellow card. Cahir lost a player but Damian O’Brien put the penalty wide of Brian Enright’s goal and Cahir maintained the slenderest of leads.

Defiantly Cahir tried to hold out but Eoin Bradshaw won a late free in the 59th minute and Damian O’Brien, made amends for the penalty miss to force extra-time.

Cahir were back to a full complement of 15 players with the re-introduction of Eoin Donaghy but it was Eire Og who got first run in extra-time. Patrick Horan, on towards the end of normal time, forced the foul and Damian O’Brien edged his side infront.

It remained unchanged until four minutes before the end when super sub, Padraig Whelan, finished off a passing movement to blast past Donncha Horan now in goal in place of Dinny Crosse who moved outfield. It looked good for Cahir with a two point advantage and time closing in.

But there was plenty of fight still left in the Annacarty side. Brian Fox was again impeded - Cahir weren’t learning - and Damian O’Brien put the free over to leave a minimum between the sides. In a final passage of play with the clock deep in overtime - who else was fouled? Brian Fox - and who else put the resultant free over the bar - Damian O’Brien to force the replay which is fixed once again for Leahy Park Cashel on Sunday next, 7 December at 2 pm.