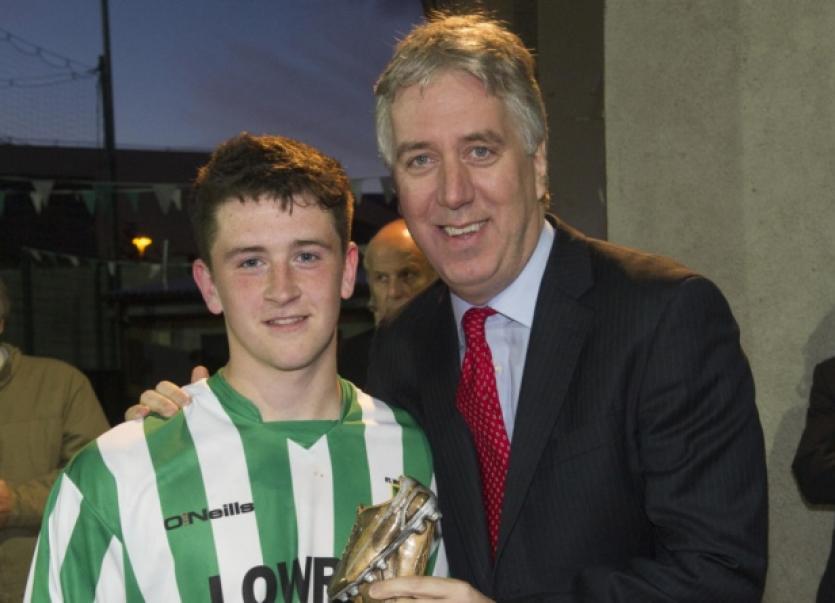 St. Michael’s having their third game in five days had to dig in and deep to overcome a useful Nenagh side in a competitive John Delaney Cup final which went to extra-time on Friday last.

St. Michael’s eventually got in to their stride and began creating opportunities at the other end. Russell Quirke, James Walsh and Pa Quinn all had half-chances that either went wide or were blocked.Equally Nenagh F.C. were posing problems and both sides went in search of the lead.

Saints eventually took the lead in the 38 th minute with the Nenagh crowd appealing that Jimmy Carr had initially fouled Cathal Coonan in the lead-up but Carr played the whistle and crossed for Darren Lynch to score from close range.

The game was held up for some minutes as Coonan was treated for an injury. When the game restarted Richie Ryan playing in an unfamiliar centre half role just failed to get on the end of a Jimmy Carr chip following a corner kick. A strong Russell Quirke run took him past several players but his shot from 18 yards went narrowly wide.

Saints were happy enough to go to the half-time break leading 1-0.

At the interval Saints replaced David Slattery putting Richie Ryan in midfield and Pa Quinn back at centre-back and looked to have better structure.

Nenagh AFC though were determined to get back in the game after a good first half and did so on 54 minutes when substitute Danny Butler found the corner of the net through a ruck of players following a corner kick.

Saints brought in Mark McGrath and Darren McGrath as play went from end to end with both sides looking for the winner.

Tiredness began to set in and extra time looked on the cards as both defences were in no mood to surrender as the final reached its latter stages.

Stephen Quinn came in and was prominent going close and Danny Butler had two chances for Nenagh before Paddy Keane’s whistle took the game to extra-time when many thought it was going direct to penalties.

The second period of extratime had just started when Saints caughtNenagh AFC asleep and Jimmy Carr crossed for Mark McGrath to score what proved to be the winner.

St. Michael’s showed lots of character to dig out this cup win and the FAI Junior Cup winners’ captain James Walsh acknowledged that Nenagh AFC had taken the game down to the wire.

St. Michael’s can collectively take a bow for this victory on a night when Nenagh F.C. didn’t always get the rub of the green.