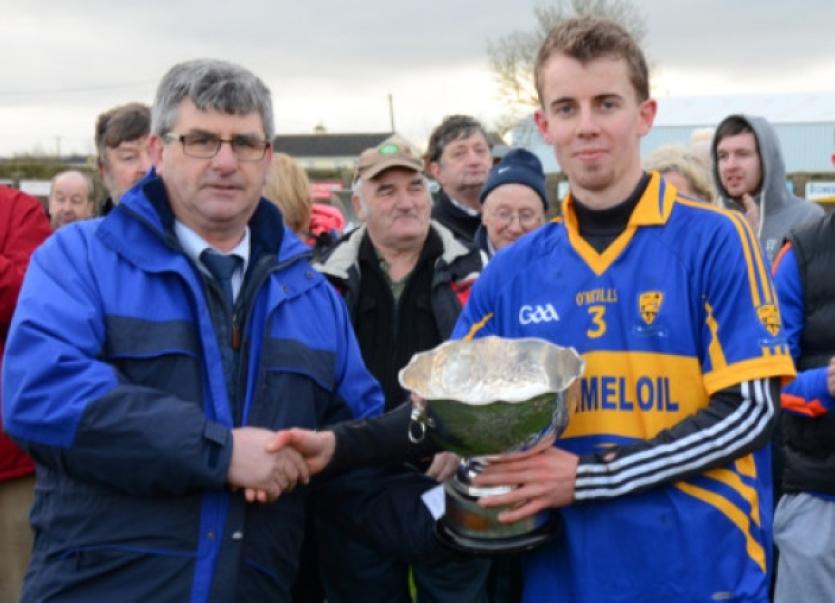 Kilsheelan/Kilcash made history in Monroe last weekend when they won their first South U-21 A Hurling Championship after a hard-fought victory over Carrick Swans in the final at Monroe.

Kilsheelan/Kilcash made history in Monroe last weekend when they won their first South U-21 A Hurling Championship after a hard-fought victory over Carrick Swans in the final at Monroe.

This was a most entertaining game, played with commitment and passion, and the large attendance added to the great atmosphere.

The Carrick side started the brighter as Gavin O’Halloran opened the scoring with a point, which was followed quickly by another from his midfield partner Eric O’Halloran. Kilshelan got off the mark in the 7th minute when Paul Maher found his brother Bill, who was fouled in possession and Colin Gleeson pointed the free. They equalised when Eoin Kehoe latched onto the puck out and crossed to David Smyth, who was fouled, and Colin Gleeson pointed from the free. Carrick’s Dean Walsh was awarded a free that they failed to convert. Following a foul on the elusive Paul Maher, Colin Gleeson pointed Kilsheelan into the lead. Gleeson then plucked the ball from the air and delivered to Bill Maher, who sent over from play.

Swans’ Mikey Loughman combined with Gavin O’Halloran and he sent over to reduce the margin. Colin Gleeson had a long- range free held superbly by Carrick captain Dale O’Hanlon, which inspired a determined movement up field involving Mikey Loughman, Colin Waters, Luke Gahan and Eric O’Halloran, who had the final shot that ricocheted off the side netting to the relief of the Kilsheelan defence. Colin Gleeson added a score from a free and Swans’ Colin Loughman pointed two late frees, one from distance, to leave the sides level on 0-5 each at the interval.

Colin Loughman was first on the attack on the resumption but his effort was wide. Bill Maher sent in a searching ball but Kieran Lonergan in the Carrick goal was up to the task and cleared his lines before Lee Wall registered the first point of the half from a free.

Paul Maher reacted with a fine point from play. Swans’ Luke Gahan then got possession but was unable to capitalise on it as he was denied by Conor Davin Murphy. Swans attacked again and a well-worked movement saw Lee Wall’s shot saved by Alex Harte and defected out for a ’65, from which Colin Loughman made no mistake. Loughman pointed another free from centre field to give his side a two-point advantage.

Kilsheelan then rallied and were rewarded with two pointed frees by Colin Gleeson to leave it all square. Bill Maher found substitute Brendan Martin and he sent over to open his account before Gavin O’Halloran responded with a well-worked point from play.

As the tempo increased Swans’ Lee Wall attacked but he was well marshalled by Conor Davin Murphy, who cleared the danger. Man of the match Paul Maher was again the provider for Brendan Martin to double his tally. Kilsheelan could sense history being made as Paul Maher sent over a beauty from an acute angle and John Kehoe pointed from play, and with four minutes remaining they held a four-point lead.

Swans attacked again and substitute Tommy McGrath was denied by David Corcoran, and a Lee Wall effort was batted to safety. Following a foul on Jamie Torpey, Colin Loughman took a short free to Lee Wall who sent over to reduce the leeway to three points. Adrian McGuire was robbed by Lee Wall, who in turn was denied by Kevin Larkin. Paul Maher registered his third point, which was cancelled out by a pointed free by Lee Wall to end the scoring. Kilsheelan/Kilcash survived a late scare when a dangerous ball was batted out by goalie Alex Harte to the sound of the long whistle, with Kilsheelan celebrating a three-point victory.

In a physical and committed game played in the right spirit Kilsheelan were the better team. They took their chances while Carrick Swans were left to rue their missed opportunities. Those who stood out for Kilsheelan-Kilcash included David Corcoran, Conor Davin Murphy, Paul and Bill Maher, Adrian McGuire and Colin Gleeson.

South Board chairman Michael Cooney presented the Flynn cup to David Corcoran, Kilsheelan/Kilcash captain, amid jubilant scenes among their large contingent of supporters.