Tipp go in search of first senior football trophy since 2009 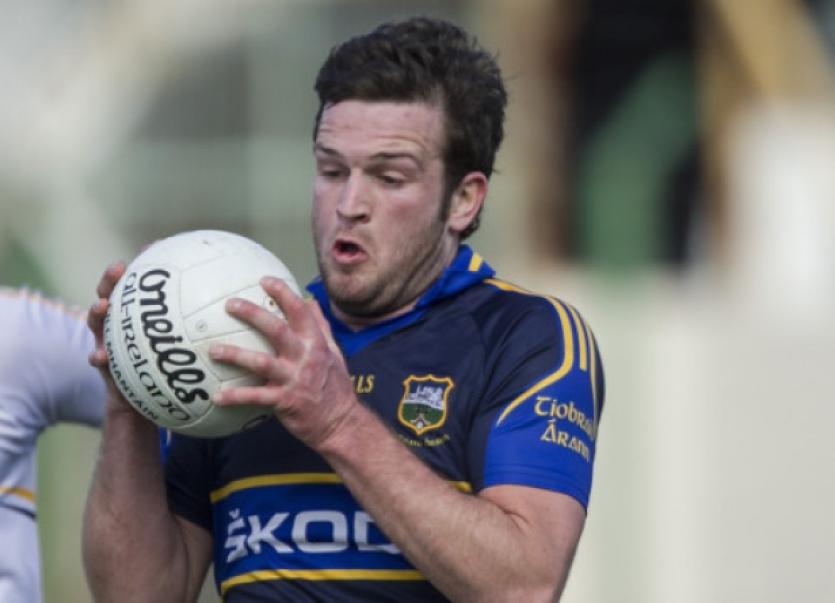 TIPPERARY may have achieved their primary goal by gaining promotion to Division 3 of the Allianz Football League but manager Peter Creedon has vowed that his players are travelling to Croke Park next Saturday in search of silverware.

TIPPERARY may have achieved their primary goal by gaining promotion to Division 3 of the Allianz Football League but manager Peter Creedon has vowed that his players are travelling to Croke Park next Saturday in search of silverware.

Tipp lock horns with Clare in the Division 4 decider at GAA HQ (5.0) and Creedon told The Nationalist: “We’re going up to win the match – that’s the bottom line. It’s going to be tough. We had a good chat and they’re all ready to go. They want to play well and win the game.”

Goals won the game for Tipp when they played Clare during the group stages in Thurles last month, with Barry Grogan netting 2-2 on the day.

Indeed, scoring goals has been a feature of Tipperary’s play during the 2014 campaign, with 14 goals netted in seven games, or an average of two per game.

Tipp hit five goals against Leitrim away from home to gain promotion in their penultimate fixture and only Waterford and Wicklow have preserved ‘clean sheets’ against Creedon’s productive attackers in this year’s League.

Creedon revealed: “We have done a good bit of it on the training ground but the fact that people can’t be checked running off the ball is an issue. “Obviously having Philip Austin back, who we didn’t have last year, he’s been probing, creating chances.

It’s Cork native Creedon’s very first time managing a team at Croke Park and he thanked the players for making the opportunity happen.

Creedon said: “It’s an honour to manage a team in Croke Park. I said that to the players – I thanked them for their efforts, giving us an opportunity to lead a team out at Croke Park. But we have to focus on the match as well – it’s just a venue really. But it’s a nice reward for the players.”

Creedon added: “Funnily enough, most of the players have played there. Only one or two haven’t. A lot of lads were there for the qualifier against Dublin (in 2010) and obviously the younger lads have played there. Some of them have played there in hurling matches as well. They’ll be fine. It’s a great game in preparation for Limerick in the championship.”

But with the pressure well and truly off, Creedon is expecting an open, entertaining game against the Banner County.

And he reflected: “Looking back at the game in Semple Stadium, there was nothing in that match. I know full well that Clare will be going gung ho for it as well. They’re very good to carry the ball and they’re very good to support the ball. They’re playing a style not too dissimilar to ourselves. Going away to Antrim and gaining promotion will be very good for their confidence. David Tubridy is a very good forward and Gary Brennan is well noted. They have a lot of very good players.”

Clare held their nerve away to Antrim in the final round of group fixtures to gain promotion and they needed to do so as Wicklow beat Tipp in Thurles.

Remarkably, Wicklow scored three injury-time goals to snatch an unlikely win that and would have been good enough for the Garden County to claim promotion, had Clare not taken care of business on their long trip north.

For Tipp, there were no such worries as Division 3 football in 2015 was assured with a game to spare.

And Creedon said: It’s massive for the profile of football, trying to bring through some of the new lads, even if we only get 50 per cent of them. “The fact that we’ll be playing the likes of Armagh and Louth next year, there seems to be a psychological thing about Division 4, that you’re down in the depths of depression.

“To go up with a bit of style as well, and we did with a game to spare. “We were half-joking among ourselves that we’re going to Croke Park, which is one of the best surfaces in Europe if not the world, and only five weeks ago we were playing in a bog over in Ruislip (London)! That’s the nature of the beast.”

And Creedon said: “I’ve certainly learned as a manager but there’s a maturity about the team this year, that fellas are driving on and questioning things. They’re looking for solutions. At the end of the day, when an intercounty game kicks off, there’s no hiding place out on the big pitches. You have to be ready or you’ll be shown up, even at Division 3 and 4 level.”

Victory for Tipp on Saturday would seal their first piece of League silverware since the 2009 Division 3 final victory over Down.