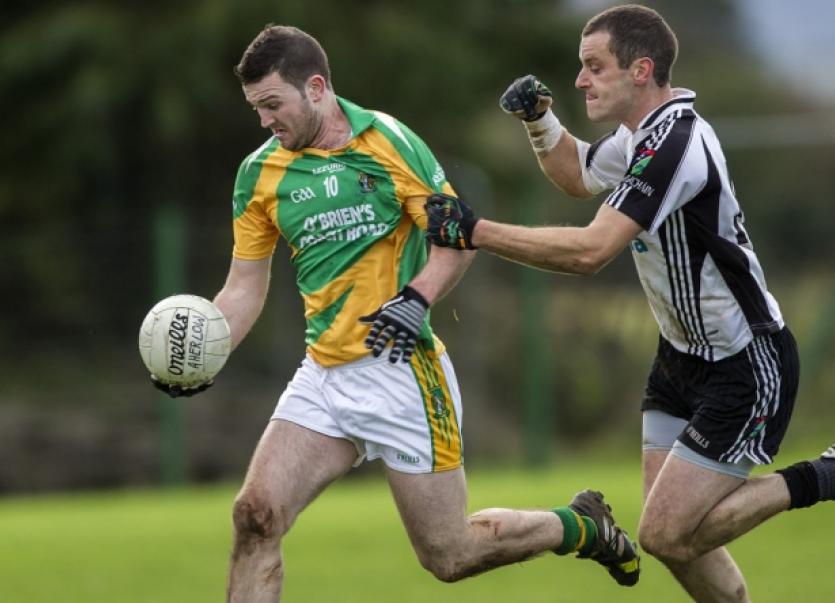 The West combination are now through to the county final on Sunday week against Loughmore-Castleiney.

Grogan’s composure in front of goal was the big difference between the two sides, and though he had a few lapses during the hour, he came good when it mattered most, to ensure a victory that looked to have slipped from their grasp with three minutes of actual time to play.

There was no shortage of incidents in this excellent encounter played with great earnestness and though both sides finished a man short as Seamus Grogan (Aherlow) and Brendan Guider (JK Brackens) were sidelined in separate second half incidents, the game was played in a commendable spirit all through.

Having been chasing the game for forty minutes, JK Brackens looked to be in a winning position when they surged ahead with a Lorcan Egan point after Seamus Grogan’s dismissal. To add to Aherlow woes, Cathal Dillon was forced off with what looked like a hamstring injury, and then Shane Scully doubled Bracken’s advantage entering the last quarter.

Everything appeared to be falling into place for the Templemore lads but disaster struck when Brendan Guider, like Seamus Grogan, incurred a second yellow card in the 48th minute, and followed him to the benches.

Thomas Fahey halved the deficit with a neat point for the Aherlow-Lattin combination who now got a new lease of life. Mervyn Braddish in the Brackens’ goal made a terrific save as Bernard O’Brien looked certain to find the net in the 50th minute, and Lorcan Egan looked to have secured a place in the final for the Templemore boys when he pointed with three minutes to go.

Barry Grogan rallied his men with points in the 58th and 59th minutes, raising the possibility of a replay, but he wasn’t quite finished yet. After Bernard O’Brien was off-target with an Aherlow chance, Grogan was the hero of the day with a pointed free in the 63rd minute to send his side into the final against Loughmore-Castleiney.

Struggling Brackens were handed a lifeline approaching the break when, after Dean McEnroe pointed for them, Sean Patrick Guerin availed of a poor kick-out to set up Cathal Scully for a goal which left them only one point behind at the break, 1-3 to 0-7.

Ten minutes into the second half, JK Brackens had drawn level with points by McEnroe and Shane Scully in answer to Barry Grogan’s opener for Aherlow. Then came the Seamus Grogan dismissal and while Templemore will feel the game was there for them, they appeared to lose their rhythm with Guider’s dismissal and can have no complaints about the result.

This win will give the Aherlow Gaels great heart as they face into the decider against Loughmore-Castleiney. They showed commendable grit and with a bit more luck might have been further ahead at the end, being denied two likely goals by Braddish saves for Templemore. Cathal Dillon’s injury will be a worry for them as they prepare for the final but they had plenty of positives from the performance and though many will fancy Loughmore-Castleiney in the decider, Aherlow Gaels have every reason for optimism.

Barry Grogan was their man of the match, notching seven points, three from frees, and in particular he showed great composure when converting the crucial injury time point from a free. Cathal Dillon, up to his injury, was also a major force with Bernard O’Brien, John Hennessy, Thomas Fahey and Edward O’Meara others to catch the eye.

J K Brackens were without former county man Kevin Mulryan, who was on honeymoon, and they will feel that had they had his steadying influence at the end, it would have carried the day.