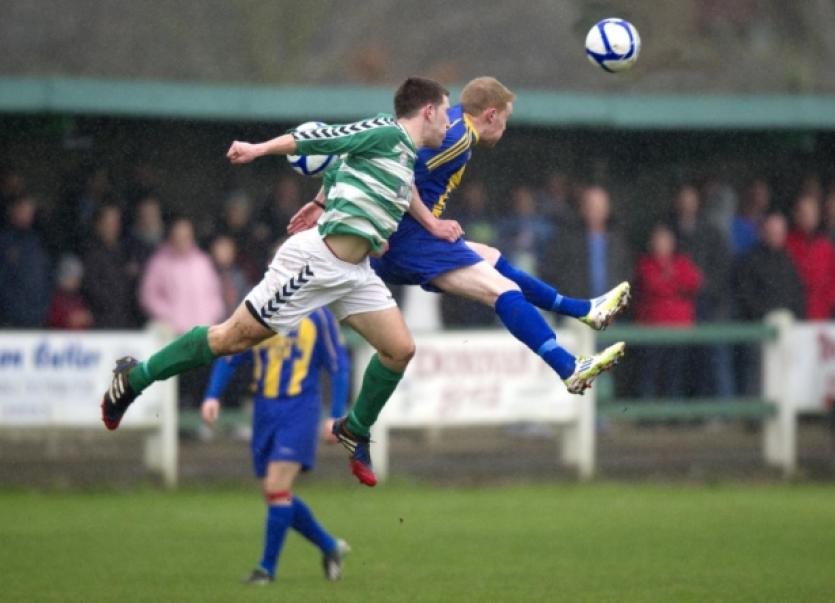 Donohill and District joined Vee Rovers in gaining promotion to next season’s Second Division with a good win at home to rivals St Kieran’s on Sunday last.

The visitors were the only team left that could deny Donohill that coveted promotion spot, but after a tit for tat opening 35 minutes, Joe Shanahan opened the scoring for the home side, firing home from the edge of the 18 yard area.

This settled his side down, and they increased their lead five minutes later, when Raymond Barry hit another sweet strike from distance to beat the travelling keeper.

The two goal advantage was a precarious one, and Kieran’s threw caution to the wind in the second half trying to cut it back, but they finally gave up three minutes into injury time when they were caught on the break and Tony McMahon got the insurance goal that sparked wild celebrations amongst the home team’s fans.

Burncourt Celtic will look back on their Shield success before Christmas as the high point of their season, but they may also look back ruefully on too man dropped points that meant they never really made any impact as far as the promotion battle was concerned.

That said, they have had a good run of form of late, and continued that with another win at home against a Ballyneale side, who also never built on some good early season form.

The home side took the lead after 25 minutes when Pa Ryan crossed to the head of Barry Mc Cormack and his team mate accepted the goal gratefully.

Pa Ryan himself extended the Burncourt lead ten minutes later, with a very well struck shot from outside the box giving the keeper absolutely no chance.

The second half belonged to the visitors and they got back into the game with a goal 20 minutes from time, but they were unable to add to it, and the home side closed out the game for a deserved win.