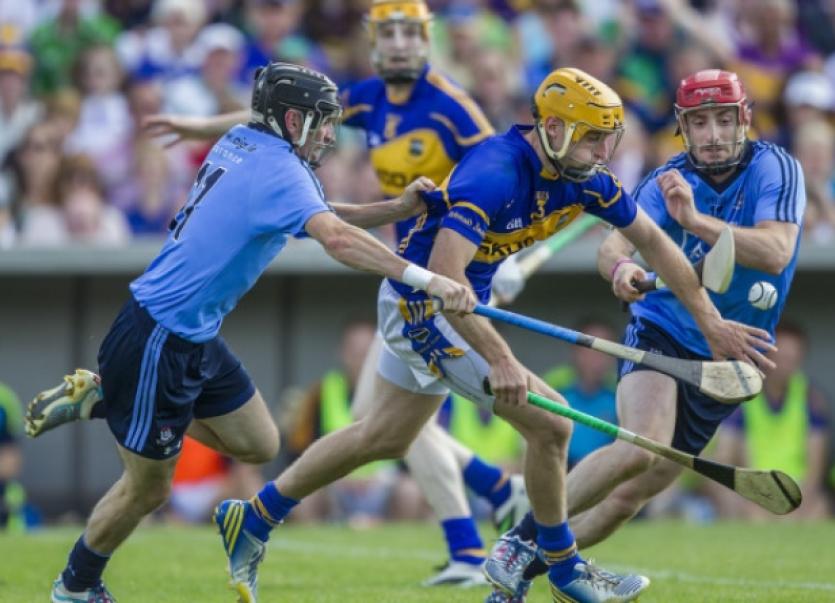 It was let-down Sunday in the hurling championship as the quarter-finals turned into damp squibs.

It was let-down Sunday in the hurling championship as the quarter-finals turned into damp squibs.

It all went very anti-climactic as the great spectacle we anticipated never materialised. Limerick shredded Wexford and Dublin suffered too against Tipperary.

No matter, the essential aspect is that we drive on now to fascinating semi-finals. Our clash with Cork will bring a great Munster tradition to the Croke Park stage while Limerick’s growing reputation looks set to test Kilkenny.

The build up in advance was promising. Public interest heightened during the week with a ticket scramble fuelled mainly by a Wexford bandwagon. Over forty-three thousand filed through the turnstiles and the stage was set for two hectic collisions. But the expected never happened. We might have anticipated champagne hurling but instead got the stale-beer variety.

The Wexford collapse set the mood. Theirs was the hurling story of the summer thus far. New boys on the block they were making waves with an exciting brand of hurling and capturing the public imagination. Talk of a new era was seeping into media coverage.

Yet by half time when they trailed by sixteen such notions seemed sadly premature. The two goals by Shane Dowling on the stroke of half time were particularly harmful rendering the second half meaningless.

Unfortunately the slaughter didn’t stop there as Limerick pushed on with admirable intensity. By the end the Wexford bubble was badly burst, an entire county left deflated. I don’t go with this notion that it was all down to fatigue. Surely modern training regimes have players ready for a run of games. More likely they were spooked by the whole razzmatazz that built around their victories over Clare and Waterford and couldn’t cope when faced by the ruthlessness of Limerick.

There are definitely green shoots evident in Wexford hurling but this was a harsh reality check for anyone getting carried away.

For Limerick it was, to an extent, atonement for the Munster final. There was a fiery focus in their game as they ruthlessly exploited Wexford’s weaknesses and they’re well set up now to have a lash at the ‘cats’. I was impressed particularly with their firepower in attack, an area that faltered against Cork. Shane Dowling led the scoring assault but players like David Breen, Graeme Mulcahy and Declan Hannon tortured the Wexford defence all day. I suspect Kilkenny will find them awkward too.

After the deep disappointment of that opener there were hopes that Dublin and Tipperary would somehow redeem the occasion. Yet what followed never felt like redemption. Tipperary didn’t exactly dazzle like Limerick but yet always seemed in control against the misfiring Dubs.

We expected a backlash from the Leinster final but it never arrived. Instead it was more of the same from the metropolitans who fumbled their way to a heavy exit, one that may have consequences for the entire hurling project in the capital.

As expected Mickey Cahill’s knee problem kept him out of the action though the extent of the reshuffle wasn’t anticipated. Strangely Paudie Maher was posted to wing back with James Barry at full, Cathal Barrett in the corner, Kieran Bergin at wing and Shane McGrath returning to midfield. It’s a lot of musical chairs and can only feed uncertainty about the shape of our defensive structure as we prepare for the semi-final.

On this occasion the defence was more than adequate for the requirements of the day and for once Darren Gleeson’s line wasn’t breached.

After the early skirmishes Tipp gradually started to construct a lead that would extend to seven-up by the interval. Corbett’s two opening volleys set a promising tone and we had some classy individual scores as the half unfolded. ‘Bubbles’ drove a massive free from inside his own half and made one of the catches of the day before laying off to ‘Bonner’ from a prone position for another point. It was a highlight that went unnoticed by TV coverage.

Callanan and Shane McGrath chipped in with individual points and ‘Bonner’ came so close to supplementing it all from one of those typical drives through the centre. The shot ricocheted off full back, Peter Kelly, and went out for a ‘65’, which Callanan landed.

Against all this there was only a modest trickle of scores from the Dubs who drove some wayward wides off play and frees. We’d played with the wind so perhaps seven-up wasn’t decisive at the interval but there was little evidence that Dublin had the wherewithal to launch a meaningful retort.

Tipperary’s two second half goals and the saved Dublin penalty were the critical items after the changeover which turned this game conclusively our way. A slip by James Barry out in the corner led up to the penalty as Barrett had little choice but to halt the attack; Brendan Maher made the save and Conal Keaney couldn’t keep the follow-up under the bar.

Then there were those goals. Blood sub, Denis Maher, initiated the first move as Woodlock and Callanan were involved in setting up ‘Bubbles’ for the finish against a badly exposed defence. The goalie’s reaction, incidentally, went unnoticed. The second came off another ‘Bonner’ burst through the middle with ‘Bubbles’ finishing the rebound from the save.

Thereafter it was all very stress-free, the final margin settling at thirteen.

There was no wild excitement at the final whistle but more a sense of job done. It was an adequate display by Tipperary but hardly stretching beyond that adjective.

‘Bubbles’ got the man-of-the-match award and I certainly wouldn’t quibble with that judgment. His 2-2 was very significant in the game but there were many other items too that were delightful such as that first half fetch already mentioned and what about those bouncing balls he took from close to the carpet as he swivelled away from his marker. It’s not his first individual award and hopefully it won’t be his last.

I would list Shane McGrath as a candidate for the top individual award too turning in a real tour-de-force on his return to full-game action. Kieran Bergin was high on the list as well and ‘Bonner’ Maher’s input was again hugely significant. Thereafter you could isolate many individual items of merit in a competent team performance.

As ever there were negative items that could be highlighted too. Eamon O’Shea (inset)sees this fluid positioning of players in defence as a non-issue. I don’t. James Barry was uncomfortable at full back on Sunday which is no surprise given his natural instinct for the half line. We face into an All Ireland semi-final without an established full back and after missing two opportunities in recent games to test Paul Curran’s readiness for a return. In fact three weeks ahead of the All Ireland semi you could run a competition to name the starting formation of our defence against Cork and be certain that very few would get it right. Hardly ideal?

Nor would I be totally happy with our attacking play. At times on Sunday Callanan was isolated on the inside line as we lobbed in aimless ball, sometimes to the grateful hand of goalie Nolan. We have serious potential in attack but our shape at times is very questionable. Against Dublin these weren’t major issue but they will be against Cork.

Anyway that’s all to anticipate in the coming weeks. For the moment we can celebrate a welcome return to Croke Park.

Meanwhile the club championship returns next weekend so check the list for a key game near you.