‘We are now a dual county rather than a hurling county’ 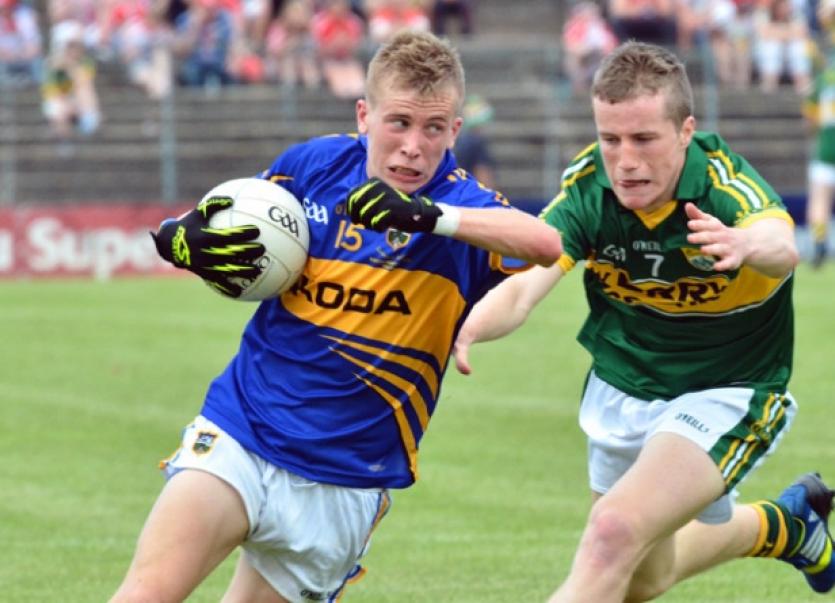 While obviously very disappointed with the defeat in the Munster minor football final to Kerry in Killarney, Tipp manager Charlie McGeever, was generous in his praise for Kerry.

While obviously very disappointed with the defeat in the Munster minor football final to Kerry in Killarney, Tipp manager Charlie McGeever, was generous in his praise for Kerry.

He credited Kerry with their ability to take some exceptional scores and that they had very few wides over the course of the game, three in all to Tipperary’s eight.

The Donegal native was disappointed with his own team’s defence in conceding so many frees, particularly early in the second half allowing Kerry take the initiative once more after Tipp had come back to level. All year long the Tipperary defence had been superb and Sunday’s tally was the biggest they shipped in three Munster championship games.

Without being too specific one got the impression that the Tipp manager was somewhat disappointed that the provincial showpiece at minor football level was perhaps spoiled by a lack of fluidity on a day that was perfect for a cracking game. It did seem a bit stop-start at times though with the referee keeping a tight rein on matters throughout.

When given the opportunity to look for excuses or distractions, McGeever declined. He didn’t blame the referee for the dismissal of Josh Keane nor was he drawn into the dual player effect on his side’s preparation for the Munster final. In fact the manager praised the exceptional work being put in by both camps (hurling and football) and took it as a huge compliment to the football fraternity in Tipperary that the county is now being classifed as a “dual” county.

When put to him in the post-match interview that the red card decision before half-time was the turning point, the Clonmel Commercials clubman resisted the temptation to concur.

“First and foremost congratulations to Kerry on one of their better performances... they had some great scores and over the game had very few wides. No regret there on how they played.”

“I had a little bit of regret with our own performance. I thought in the second half we fought very hard and brought it back level.”

“I will remember the day not for Kerry or for Tipp but for other reasons, I think that the game was a little bit spoiled today given that the conditions were great and that both teams tried to play football. There wasn’t one dirty slap in the match and a couple of the key decisions didn’t go our way. But on saying that we take nothing away from Kerry today, we must try and come back at them further down the line.”

“Very inexperienced, young team, a number of under 16 players, four of them on the field at the end of the game, but we came here to win and we believed we could win. We probably left a number of scores behind us ... we have been very good defensively up till now and this is the first time we have conceded the number of scores we conceded.”

“Hats off to Kerry for some of the exceptional scores today.”

When asked about the Kerry tactic in the second half of playing the extra man back in front of their full-back in a sweeping role, McGeever added.

“Kerry with the extra man were going to play him there anyway. I took great heart from the first 15 minutes of the second half. A couple of very soft frees put them back ahead again and we needed to get ahead at some point in the match. I put it down to our wides costing us and Kerry’s good finishing and there is very little else between the teams other than that on a very warm day that I thought was perfect for football.”

When asked about the dual player issue being a disadvantage to Tipperary in their preparation for the football final, again McGeever was not looking for any excuses.

“All seven of them are key to us, they trained well with both camps, I think it is important that they are leaders. I think they all performed well today, most of them played well today ... some days it goes for people other days it doesn’t.”

“I would feel that the work put in to both camps was exceptional, we worked well together in the preparation. We have got to live with that. We are now a dual county rather than a hurling county and that is the biggest compliment you can pay at this stage. We are down that line as being a dual county. We have to continue we that. The barriers are there, we know they are there before the start of the year.

“Hopefully now we will get a month of clear water to prepare and we will be a better team in the All-Ireland quarter-final.”

“You wouldn’t say that today was a one-sided match. I would say that on any given day it could be either team. We will go forward.”

“The facts of the matter are that we are in the home of football in Killarney playing Kerry. And to say that we were favourites, in fairness there’s a little bit of gamesmanship there. At the end of the day it’s a long way to come to play a Munster final. You have to lose to realise what it is and we have gained a lot from today.”