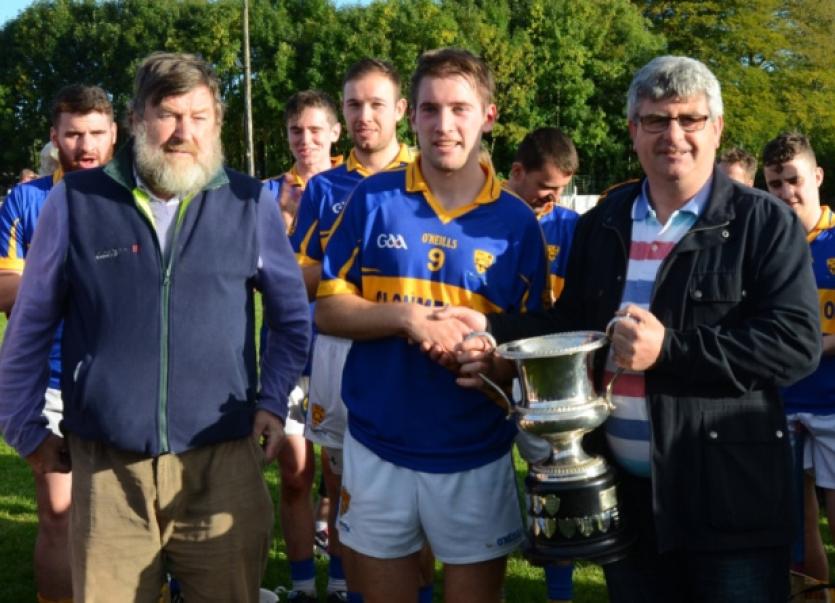 A superb display from Paul Maher helped Kilsheelan/Kilcash to their first South Tipperary intermediate hurling championship in eighteen years with a three point victory over St Mary’s at Cahir on Saturday evening.

Maher hit thirteen points in a man of the match display and after the game his brother Bill accepted the Jerome O’Dwyer Cup in the Martins Fruit and Veg sponsored event.

Maher hit eight points from frees and five from play in a display of scoring that was a joy to watch - and for supporers it helped to ease the pain of the County SFC quarter final defeat to Loughmore/Castleiney three nights earlier.

The game opened at a lively pace with an exchange of points within a minute from Martin Gibbs(Kilsheelan) and a free for St Marys from Brian Carroll. Kilsheelan then stormed into a lead with three unanswered points from the 11th to the 15th minute, all from Paul Maher, two frees and one from play.

St Marys then hit three unanswered points from the half forward line Ross Peters, Brian McDonald and Jason Lonergan to level the game at 0-4 each.

The Clonmel side continued their dominance with impressive hurling, adding three points from Seamus Kennedy from 100yds, a Brian Carroll free and Ross Peters who got on the end of a very long free from Seamus Kennedy to put St Marys 0-7 to 0-4 ahead.

Kilsheelan/Kilcash hit back with three points in three minutes from Niall Walsh, a Paul Maher free and Tommy Ryan with Brian McDonald getting a point in between to end a pulsating first half St Marys 0-8 Kilsheelan/Kilcash 0-7.

In the second half Kilsheelan were quick off the mark with a point from Mark Kehoe but Carroll replied with a pointed free. Kilsheelan got the next two from Paul Maher but St Marys came back with a brace of points from Emmet Ryan and Brian McDonald.

Kilsheelan added two more points from Paul Maher to leave both sides level again at 0-13 each in the 45th minute.

The pace then got faster with St Marys adding two points from substitute Matt Barlow and Emmet Ryan and then Ross Peters fired a rasper towards goal only to see Tadgh Lonergan make a tremendous save. The town side were out of luck again when a Brian McDonald effort came back off the post and was cleared.

St Mary’s may have missed the chance to put the game away with Kilsheelan adding two points during this period from a Paul Maher free and a Bill Maher point over his shoulder from 40m out to see the teams level again with five minutes left.

Kilsheelan/Kilcash then dug deeper to work out scores and hit three without reply to seal the win - the first from near the touch line from Paul Maher, the second a free by Paul Maher and the final score of the day from Bill Maher in the middle of the field.

It was Kilsheelan’s first win in the grade in eighteen years with both teams going forward to the County quarter-finals on this Wednesday night - St Mays v Cashel King Cormacs while Kilsheelan/Kilcash face Drom/Inch.