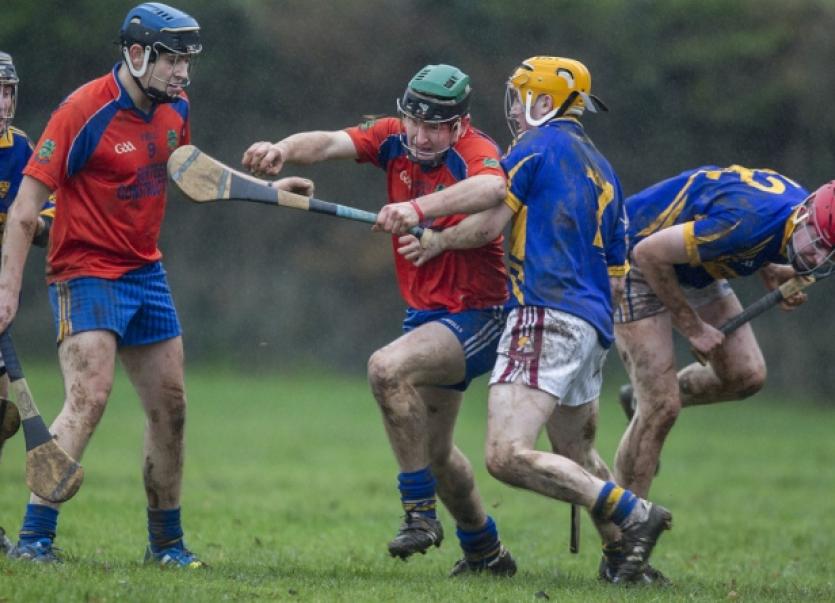 Skeheenarinky rounded off a successful 2013 for the club by capturing the South U-21 ‘B’ Hurling Championship at Cahir on Sunday last.

Skeheenarinky rounded off a successful 2013 for the club by capturing the South U-21 ‘B’ Hurling Championship at Cahir on Sunday last.

Half-way through the second half it was hard to see  anything other than a Kilsheelan win but driven on in particular by John Martin from centre-back Skeheenrinky rallied to a deserving victory.

Credit to both sides for an entertaining game in conditions that weren’t in any way conducive to good hurling. But in fairness to all, they got on with the job in hand and in difficult underfoot conditions on a grey December’s day played out an exciting finale to the South Division’s year.

Inside a minute Danny Barrett had Skeheenarinky ahead when pointing a good clearance from Rian O’Callaghan.

Kilsheelan midfielder Adrian Maguire levelled matters after three minutes but other than John Kehoe, no other Kilsheelan player would score on the day.

Kilsheelan hit the front in the fifth minute when John Kehoe capitalised on a poor clearance and five minutes later Kehoe again, this time with a free after Alex Harte was fouled, stretched the lead to two points.

Danny Barrett, who was having a great battle with Eoin Kehoe, scored a delightful point off his left from 45 metres on 13 minutes, but Skeheenarinky wouldn’t score again for another half hour.

Wastefully in the first period the eventual winners shot no less than ten wides, some very poor efforts indeed. Had they been beaten they would have rued this aspect of their play, even allowing for the poor conditions.

Two further long range frees by John Kehoe, the second right on the stroke of half-time from the half-way line, had Kilsheelan 0-5 to 0-2 in front at the break.

With Paul Maher and Bill Maher showing prominently early in the second half Kilsheelan were looking the more promising and John Kehoe scored a lovely point from 40 metres to put them four clear after 34 minutes. The third quarter of the game produced no other scores but the battle for supremacy was hotting up and slowly the physically stronger Skeeheen side began to threaten.

Two minutes later, John Martin again rising to the occasion, pointed from the 40 metre line to reduce the lead to just two.

Noel Vaughan, for the second time in minutes, was fouled in possession and once more Fionan O’Sullivan punished the indiscretion of the Kilsheelan defenders.

Kilsheelan needed something soon and they had a glorious opportunity on 49 minutes when Bill Maher cut through the middle but his shot at goal went narrowly wide.

John Kehoe pointed to give a temporary relief after a pass from Paudie O’Donovan but it was to be Kilsheelan’s last contribution to the scoreboard.

Two great points in a couple of minutes, both from John Martin, brought the scores to 0-7 apiece, and there was no doubt about it, the pendulum had swung in favour of John Burke’s charges.

Perhaps the point of the game followed with a four-man move involving captain John O’Callaghan, Danny Barrett and John Martin with Tommy Sweeney finishing with the point. It gave Skeheenarinky the lead with just five minutes to go.

The game’s ultimate score came from a Fionan O’Sullivan free from 48 metres in the 58th minute.

For the winners, many of whom were picking up their third South medal this year, John Martin was the main man putting in a rousing performance. John O’Callaghan, Rian O’Callaghan, Neil Barrett, Danny Barrett, Bobby Breedy, Eoin Morrissey and Noel Vaughan also stood out, as did Seamus O’Callaghan before his ankle injury late on.

For Kilsheelan without their injured captain Colin Gleeson and James David Murphy, the likes of the Mahers, Kehoes, Larkins, David Corcoran and goalkeeper Tadgh Lonergan gave it everything. With all 15 underage again next year their day may not be too far away.