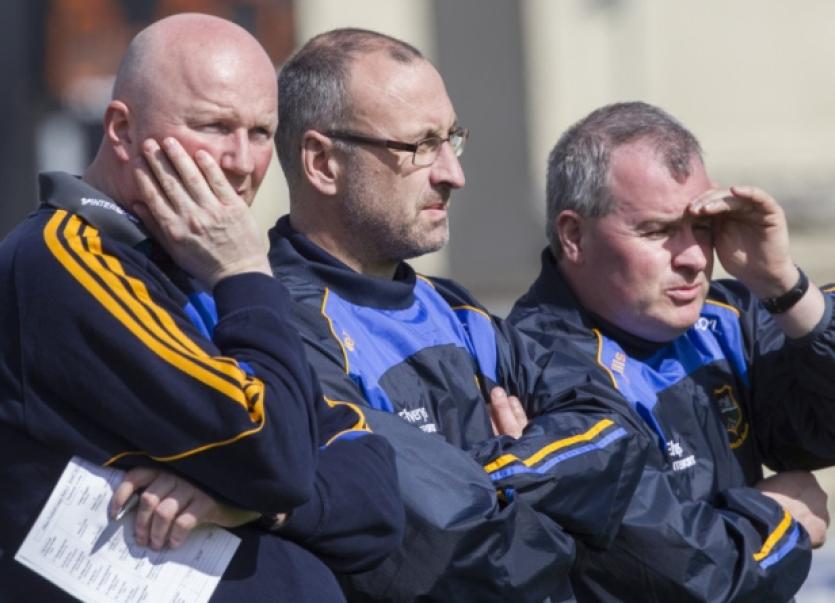 Tipp’s Munster Senior Football Championship campaign 2015 commences on Sunday next at Semple Stadium with the visit of Waterford.

Tipp’s Munster Senior Football Championship campaign 2015 commences on Sunday next at Semple Stadium with the visit of Waterford.

The hosts will be hot favourites to advance with some bookmakers putting them at 1/8 to win, but those in the know quickly dismiss such favouritism as downright ridiculous.

Tipperary trainer/selector Michael O’Loughlin is eminently qualified to preview Sunday’s encounter having been involved in both Waterford and Tipperary camps almost continuously over the past decade.

From 2005 to 2009 Michael was coach with The Deise under the management of John Kiely and in his first year with the team helped Waterford to achieve what was their first victory in the National League in all of six years. The victory that day came against none other than Tipperary.

Since then the counties have met three times in the National Football League with Tipperary failing to beat their neighbours in any of the games - two defeats and one draw being the lot of the Premier. They met in Division 3 in 2011 in Dungarvan with the home side winning 2-8 to 0-9; again in Frahers Field in 2013 in Division 4 with another home win on the same scoreline 2-8 to 0-9; while last year in Clonmel, Tipperary were lucky to escape with a draw 0-12 to 1-9.

Clearly in these local derby games Tipperary have their hands full when they come face to face with Waterford.

Tipperary’s last competitive win at senior level (league or championship) over Waterford goes all the way back to May of 2003 when at Walsh Park, Tipp came through by 0-18 to 1-12. Indeed from that day until last May when they defeated Limerick at the Gaelic Grounds, Tipperary would not win a single Munster Senior Football Championship game. Tipp’s manager in 2003 was Tom McGlinchey who on Sunday next, as Waterford’s manager, will be plotting to upset the odds and pull one over his old colleagues.

Statistics like these quickly focus the minds and the Tipp team need to be in the right frame of mind for Sunday’s clash.

“You simply cannot underestimate them,” said Michael O’Loughlin. “Waterford will have no fear whatsover of Tipperary and have a very good record against us over recent years.”

“I know from my time there and from watching them over the years, particularly at club level, that they are fiercely competitive. The club scene in Waterford is well ahead of ours in terms of competitiveness each year. Take clubs like The Nire, Stradbally and Ballinacourty, if they were in Tipperary they would win the county title any year. Their club performances on a regular basis in the Munster championship bear that out. The Nire were very unlucky not to beat Austin Stacks in last year’s Munster final. No doubt about it, there are plenty of quality footballers in Waterford,” he added.

“They have key players such as Shane Briggs in defence, the two O’Gormans from the Nire, Liam O Lonáin from An Rinn, Mark Ferncombe of Ballinacourty and Kilrossanty’s Paul Whyte who is a brilliant forward and a real danger from Tipperary’s perpective.”

“They have an excellent new manager this year also in Tom McGlinchey who previously managed Tipperary at senior level. There is huge coaching experience there and a proven track record. Tom brought Cahir all the way to the Tipperary county final last year (they lost the replay by a point to Cahir on St. Stephen’s Day in Cashel). They won’t be lacking anything there,” added Michael, school principal at the Presentation Secondary School in Clonmel.

It is worth mentioning that as a very young manager Tom McGlinchey brought Tipperary to the Munster senior football final in 2002 when they came agonisingly close the first day at Semple Stadium before losing the replay in Páirc Uí Chaoimh.

“Tom McGlinchey got an excellent start at Waterford and they won the McGrath Cup this year and won their opening game against Wicklow in the league. They were unlucky in some games in the league also - they lost three times by just two points - so the league didn’t really do them justice, they are way better than that,” added Michael.

Turning to Tipperary’s preparation for Sunday’s clash Michael was happy with the way things were going at present with no serious injuries to report and hoping they can field to full strength or as near to full strength as possible.

“We are happy with our year to date. We set out at the start of January with three targets. The first was a good league campaign and to at least consolidate our place in Division 3 in our first year. The second aim was a good run in the under 21 championship which despite the defeat to Tyrone in the final went remarkably well. And the third aim was for the seniors to get a good run in Munster and/or the qualifiers. We have two of the three accomplished and hopefully we can do well with our third aim, starting against Waterford,” he added.

“We appreciate that perhaps another year in Division 3 mightn’t be a bad thing either as we might not be ready for Division 2 just yet. It’s a big step up but that’s our goal. After that there is not a lot of difference in the standard between Division 1 and Division 2. We want to be in amongst the elite 16 in the years ahead.”

“The defeat in the All-Ireland under 21 football final took us all a little time to get over. We were very disappointed in losing and in the manner in which it was lost and the heads were down after it, no question about that. We took a break from it and then returned. We played Longford on the Friday night after the long weekend and we played poorly and were beaten. The form wasn’t there but it has returned since,” added a reflective Michael.

“Obviously we are expecting a very tough game against Waterford, a side that will have no fear whatsoever of Tipperary. We are expecting a very tight game as you would expect from a local derby. But we are positive also in our own team. We have proven that we are comfortable in Division 3, that we are a match for the likes of the Armaghs of this world, and we want to be meeting teams of that standard more often. We want to be going to a higher level and that has to be our ultimate aim,” he added.

“The carrot for the winners on Sunday next is a game against the All-Ireland champions Kerry. All the lads would very much like that, the chance to measure yourself up against the best. If we can get over Waterford we would play Kerry in Thurles two weeks later on 14th June, but you have to get over Waterford first. We are looking forward but not too far ahead of ourselves,” he cautiously added.

“We are delighted that Ciaran McDonald is back for the championship having missed the entire league campaign. It is a huge boost to have Ciaran back, he is a born leader and all the players look up to him on and off the field. All the others from the league and under 21 campaign are also available which is a boost. And we’ve been going well in training and had two competitive challenge games lately with wins over Limerick and Wexford. So overall it is positive. We are well prepared for the challenges ahead,” he concluded.