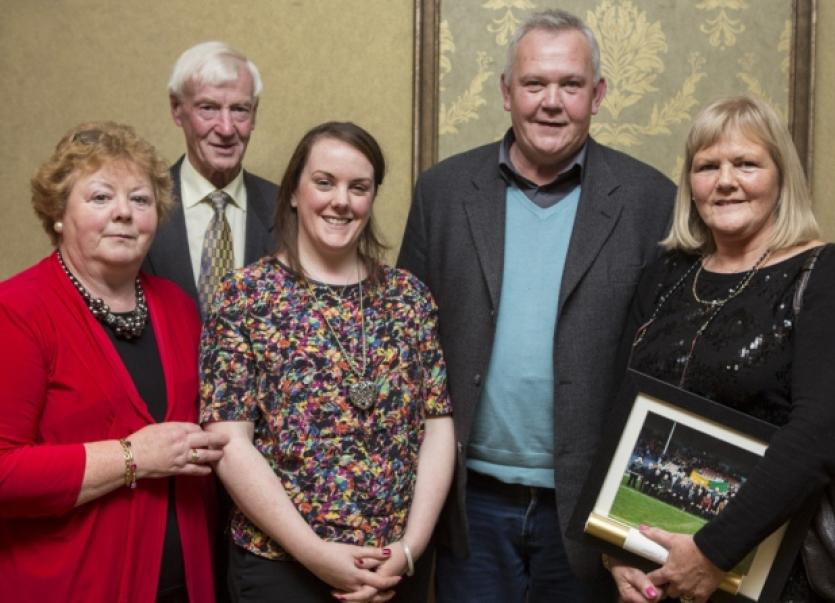 Congratulations to the club’s minor team on winning the county title, by defeating Drom & Inch at Boherlahan on Sunday morning last. In an assured performance, Commercials had 7 points to spare but could never relax as Drom battled to the end.  In the early exchanges there was little to choose between the sides, Drom led early on but by the end of the 1st quarter Commercials were four points ahead.  Padraig Looram was beginning to impose himself on proceedings and the county player led by example, delivering a man of the match performance.  The full back line of Ross Dennehy, Liam Ryan and Robbie Lyons were excellent throughout, while further out the field Sean Gunne, Kevin Fahey, Ross Peters and Richie Gunne were all making an impact.  A 24th minute goal by Michael Nugent all but sealed the victory.

Drom brought the fight to Commercials and although they never really threatened to spoil the party, they did battle bravely and goaled 13 minutes from the end to get to within 5 points, but Commercials didn’t panic and responded in magnificent fashion.  In the end the 7 point winning margin reflected the dominance of Commercials.  The final whistle saw Commercials celebrate a historic 4 county titles in a row. Well done to the panel of players, selectors and all associated with this achievement. Team:Jake McDonald, Robert Lyons, Liam Ryan, Ross Dennehy, Richie Gunne (0-1), Sean Gunne, Eric Walsh, Kevin Fahey (Capt), Jack Kennedy (0-1), Ross Peters, Padraig Looram (0-4), Michael Connolly, Michael Nugent (1-0), Padraig White (0-4F), Stephen Kelly (0-2). Subs: Shane Moloney for Nugent; Kyle Peters for Dennehy; Graham Kelly for Kennedy, Joey Doyle for S. Kelly.

There was a lovely occasion on Sunday, as the Clonmel Commercials county winning teams of ‘69 and ‘71 were honoured at the senior county final in Thurles.  Members of both panels gathered at The Dome for a pre match reception and were then introduced to the crowd at half time.  Old stories were recalled and achievements remembered, as the players met later at the Clonmel Park Hotel for a meal.  A great day for the players of the past and the club wishes to thank the County Board for honouring these players in this manner.

The club’s Fashion Show took place at The Clonmel Park Hotel on Friday night and was a most enjoyable evening.  The models displayed clothes from Dame, Only, TK Maxx, Penney’s, Connolly Man, New Look, Wurlitzer and Jack & Jones. The models were all drawn from the club and they deserve great credit for their time and efforts.  Well done also to Niamh, Tanya, Amy, Aoife, and Liam who all worked hard to make the show take place.  An enthusiastic audience showed their appreciation for the models as many took to the Catwalk for the first time.  Slick modelling was matched by the excellent comparing of Tanya and Liam while those who worked behind the scenes, worked hardest of all. The half time entertainment was provided by Kia Burke and Brian Mangan who performed a number of songs and did so brilliantly.  Congrats to all and thanks for your support.

The draw will be held in Bernie Macs on Saturday 9th November. The jackpot now stands at €1,800.

Fortnightly tickets are available for €2.  Alternatively for a fee of €25 you can join for 6 months or €45 for a year’s subscription. Tickets and brochures are available from committee members and players of both clubs.

The club is holding a scrap metal collection next Saturday in the Sportsfield between 10.00 a.m. and 15.00 p.m.

Contact Joe at 087-2417381 or any committee member for further information.

The club wishes to extend its sympathies to the Pyke family on the death of Tom Pyke.

Deepest sympathies to the O’Mahoney family on the death of Thomas O’Mahoney.

The opening match of our campaign takes place against Carrick Swans next Sunday, November 10th in Kilsheelan. Throw in is at 2pm and we are asking for your support on the day.

Training continues on Wednesdays and Fridays and a full attendance is expected.

A weekly indoor tournament for the U/8s will commence next Saturday, November 9th in the Pat O’Callaghan Complex, Cashel Road from 10 am to 11 am. All players are requested to attend and participate.

Indoor training for the winter will commence for our U/6s next Saturday, November 9th, in the Pat O’Callaghan Complex, Cashel Road from 11am until 12 noon. All players to attend. If you have a son or daughter in this age group that might be interested in taking up hurling, you could do worse than bring them along and give it a try. You’d be very welcome!

John Carew is now taking orders for jerseys and club hoodies in plenty of time for Christmas. John can be contacted at (086) 8317591. Please note that a deposit will have to be paid, as we have been left with a few jerseys that were ordered but never collected.

James Moore had an unfortunate accident in training last Friday evening that has left him with a broken finger that required surgery. He will be out of action for a while and we wish him a speedy recovery.

Thanks to all for their continued support of our weekly lotto.

We had 38 players partaking. 1st on 13 games Vincent Commins and Alice Quinn, 2nd on 12 games Ann Keating and Michael Mulcahy.

Game every Tuesday night at 8.30, all welcome.

A Table Quiz in aid of Special Needs Children’s trip to Lourdes 2014 will be held in the Half Way Bar, Rathronan on Friday November 22 at 9.00pm. € 20 for a table of four. This event is being run by Moyle Rovers Club in conjunction with Irish Pilgrimage Trust. Please support this worthy cause.

Congratulations to Paul Condon on winning € 500 in County Board Draw and to Sean Butler and Dick Lonergan on winning €200 and to Alan Kennedy, Ballylooby on winning the car.

Speedy recovery to Kieran Quirke who injured his shoulder recently in the U-13 blitz.

UNDER 21s GET WALKOVER

We were given a walkover from the Grangemockler/Davins combination in the South under 21 hurling championship last weekend.

We are due to play Kilsheelan/Kilcash this Sunday at 2 pm in the GAA Sportsfield in Clonmel.