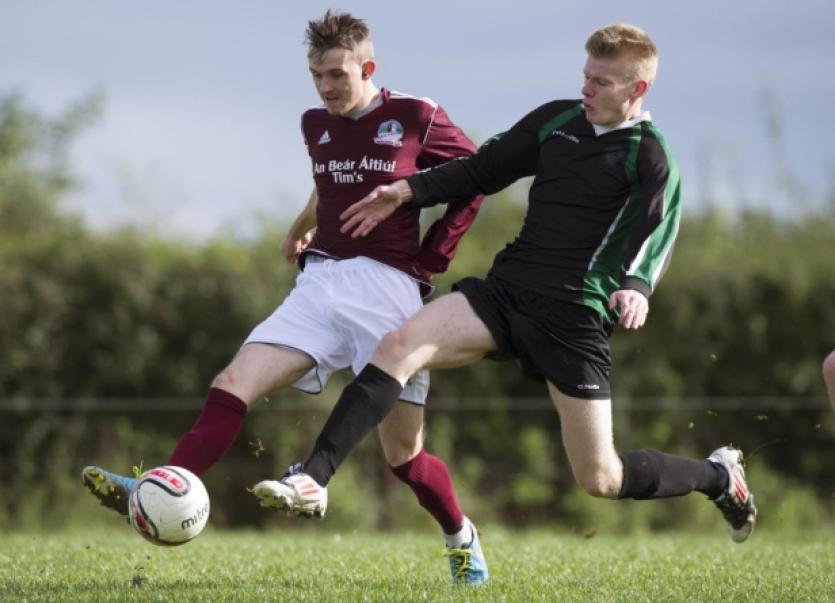 The home team made hard work of this win but moved into the next round of the after a good performance on Sunday morning last.

Having a topsy turvy season Nicholas’ went one down to their lower league opposition after 15 minutes when Liam Byrne took a pass from Pa Ryan to put the visitors a goal up. This spurred the hosts into a flurry of activity and they were on par ten minutes later when Philip Doherty finished a cross from Alan O Riordan to the net. Doherty doubled the lead with his second of the day on the half hour, and a John Joe O’Brien penalty five minutes later seemed to have made this game a comfortable one for the home side.

It got even better five minutes after the break when Doherty completed his hat-trick again combining with O Riordan. However, Burncourt staged something of a comeback and two goals from John Mc Mahon on 65 minutes, and a penalty on 80 caused jitters amongst the home support. A penalty miss in the 90th minute did nothing to calm these jitters but St Nicholas held on in the end to progress to round two.

Clonmel Town continued their excellent form with a comfortable win against a Kieran’s team who may have had next weekend’s Shield final on their minds.

Richie Crowe opened the scoring for the visitors when he blasted a shot home after doing all the approach work himself. Kieran’s were denied by a fantastic save from Evan Comerford. This roused Town and they tightened up considerably to get to the break a goal ahead. They cut loose in the second period, starting six minutes in when Emmet Johnson pirouetted inside the box and shot past a stationary keeper. Four minutes later, the host’s centre-half put through his own goal, and Clonmel relaxed into a pattern of good incisive play. They made it four from the penalty spot on 75 minutes through Comerford, and Richie Crowe finished the scoring with a fifth without reply ten minutes before the end.