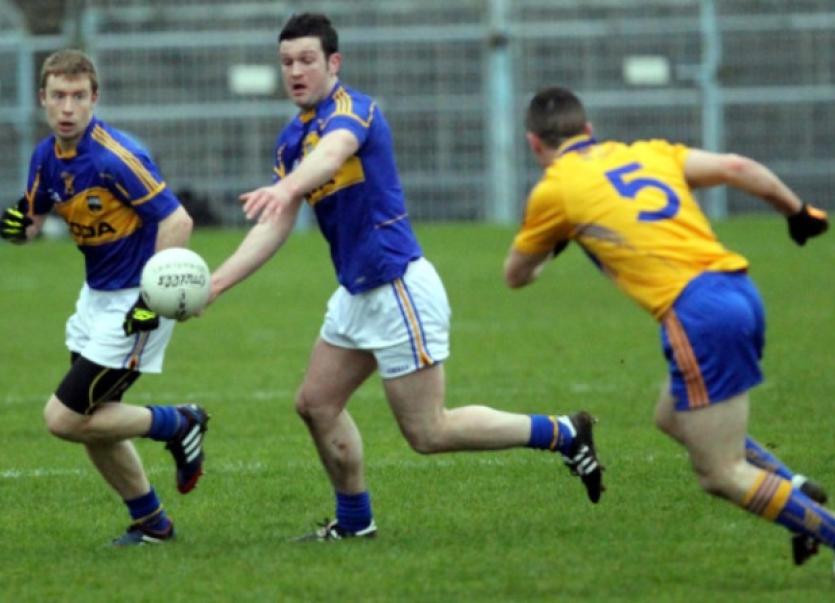 Two unbeaten teams went head to head at Semple Stadium, Thurles on Sunday last and the spoils of victory now put Tipperary in with a great chance of promotion.

Two unbeaten teams went head to head at Semple Stadium, Thurles on Sunday last and the spoils of victory now put Tipperary in with a great chance of promotion.

This was without doubt Tipp’s best performance of the league to date and the battling victory as much as the two points gained will give them a huge boost for the remainder of the Division Four campaign.

Starting with two changes in personnel from the previous Sunday in London, Tipp got the most perfect of starts with a goal inside the first 20 seconds. A long ball delivered by Brian Fox was fielded by Conor Sweeney and the Ballyporeen man turned and drove hard into the bottom corner for the tonic start the Tipp troops wanted.

A Clare free by David Tubridy opened the Banner’s account in the second minute and thereafter the game settled into a point-for-point pattern with both sides trying to play fast attacking football.

Man of the match Michael Quinlivan pointed in the fourth minute for Tipp and was very much involved in another movement which ended in Philip Austin scoring in the 10th minute. Quinlivan was at his busiest and his best in this league thus far and as the game went on he became more and more influential in workrate and effectiveness.

Austin scored his second point in the 16th minute at which stage Tipperary led 1-3 to 0-4 with Clare points coming from Jamie Malone, Shane McGrath and the lively Martin O’Leary.

The visitors were in the ascendancy now though and had matters level at 1-4 to 0-7 by the 24th minute with further points from McGrath and two from O’Leary (one a free) while all Tipp could muster was a free from Conor Sweeney in the 22nd minute.

Tipp were working hard all over the field, determined not to fall behind and they didn’t - and they wouldn’t at any stage over the 70 minutes. An excellent solo point from Brian Fox restored the lead for Tipp.

A flowing move in the 25th minute involving George Hannigan and Philip Austin put Barry Grogan through on goal before the Aherlow man was taken down for a penalty. He dusted himself down for the spot kick but Pierce de Loughrey in the Clare goal stretched himself well to save. A big opportunity spurned by Tipp.

Three minutes later Grogan was to make amends with a brilliant goal from play. An Alan Moloney crossfield pass - on for the injured Ian Fahey - was taken in flight by Grogan who swivelled and found the top corner of the Clare goal from 13 metres. It renewed Grogan’s and Tipp’s belief that a win was on the cards.

Clare had the last two points of the first half, one from Shane McGrath and David Tubridy’s 45 on the stroke of half-time at which Tipp deservedly led 2-5 to 0-9.

Clare came out fighting for the second half and again had parity restored by the 50th minute at 2-6 to 0-12. Jamie Malone and a pair of frees from Martin O’Leary and David Tubridy were answered by just a single point from play from Tipperary via lively corner forward Brian Fox.

Clare were having the greater share of the possession at this stage but some excellent defending by Tipperary kept them at bay. Led by Peter Acheson and the likes of Paddy Codd, Ger Mulhair and John Coghlan Tipp were standing up manfully and admirably when needed most.

The decisive break and game changer came in the 53rd minute. Conal McCullagh and Sweeney combined to put Quinlivan through only to be fouled inside the small square. Full of belief, this time Grogan buried the penalty under the crossbar and Tipp were in the driving seat once again.

A pair of points apiece were shared in the last eight minutes, via David Tubridy and Rory Donnelly for Clare and Tipp’s Barry Grogan (a free from a difficult angle) and a fully deserved hard-won point for Michael Quinlivan.

Tipp will be delighted with this win which puts them atop of the table, unbeaten and level with Leitrim on seven points each. With Antrim to come at the Stadium on Sunday next another win against The Saffrons would put promotion within striking distance.

There was a lot to be happy with in Sunday’s performance most notably the improved workrate and the doggedness needed in a promotion battle. There was much to admire too in general play with Quinlivan outstanding and others to shine were Peter Acheson, Steven O’Brien, Brian Fox, while Ger Mulhair, Paddy Codd and Donagh Leahy worked very hard in defence.