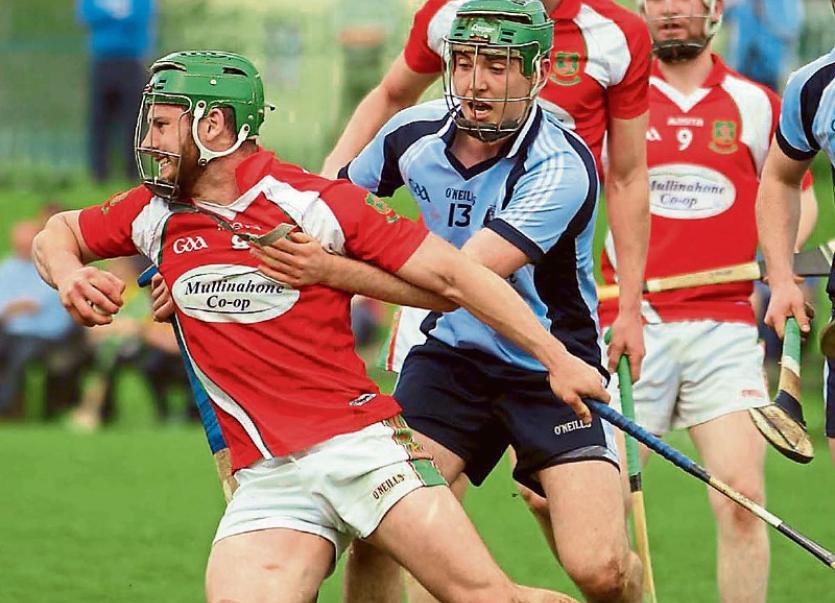 South champions Mullinahone, snatched a dramatic victory from the jaws of defeat with a penalty goal five minutes into injury time to pip a fancied Eire Og Nenagh outfit at Templemore on Sunday to qualify for the knock-out stages of the county senior hurling championship.

In a hectic finish, Mullinahone’s mighty effort looked to be coming up just short as they fell behind to a Michael Heffernan pointed free in the 63rd minute.

But two minutes later, Mullinahone sub Donal Cody was fouled, and Sean Curran banged the resulting penalty to the net to put his side two clear.

Mullianhone still had to survive a Shane Maher effort for a Nenagh goal which hit the post, but survive they did to reach the first round proper of the championship.

Both sides having lost to Kiladangan, but defeating Templederry, this contest was to decide who would join Kiladangan, the group winners, in the knock-out stages of the county championship.

The sides were level on no fewer than seven occasions in a lively encounter in which both sides had notable absentees. Nenagh were without the Heffernan brothers, Barry and Tommy, and Hugh Maloney, all injured, while Mullinahone had Eoin Kelly ineligible because of suspension.

With the breeze behind them in the first half, Mullinahone needed to build an advantage for the second period but all they had was an injury time point from Graham Horan to put them 1-6 to 0-8 clear. Indeed, were it not for Sean Curran’s 25th minute penalty, after he was brought down, they might well have trailed.

Mikey Heffernan was in sparkling form for Eire Og, taking his points with aplomb. He contributed five as Nenagh went 0-7 to 0-4 clear after 24 minutes.

Shane Maher was using his strength to win possession for the Nenagh lads while Mullinahone struggled, all their scores, bar one, coming from Sean Curran frees.

The penalty goal got them on terms and Curran and Heffernan exchanged points from frees before Horan nudged Mullinahone ahead 1-6 to 0-8 with an injury time point.

At this stage, with the breeze to favour them in the second half, the expectation was that Eire Og would drive on for victory.

Mullinahone had been guilty of some poor shooting and that continued in the second half as Nenagh hit four unanswered points in nine minutes to pull clear, Heffernan (2) Daire Quinn and Shane Maher the scorers.

There is a great spirit about Mullinahone and this shone through in adversity as they took control with Alan Curran doing great work in the midfield area.

They outpointed Nenagh 5 to one from the 43rd to the 54th minute, Michael Dunne, Kevin Walzer, Sean Curran (2), and Kevin Bolger finding the target, Tommy Heffernan, who had come on, responding with one for Nenagh, leaving Mullinahone ahead 1-11 to 0-13.

Two Mikey Heffernan points from frees had Nenagh ahead once more as tension grew with the seconds ticking away. Sean Curran levelled. Daire Quinn restored Nenagh’s lead. Kevin Bolger levelled in the 61st minute. Then Heffernan again pointed for Nenagh from a free in the 63rd minute after a careless challenge, and it seemed they had it won.

But there was one more twist and when Mullinahone’s Donal Cody was fouled in the Nenagh goal area, Sean Curran showed nerves of steel opting for a winning goal rather than take a levelling point. Shane Maher hit the post with an effort for Nenagh subsequently but that was that. Mullinahone players and fans were breathless; Nenagh’s were speechless, the body language of both clearly indicating their emotions after such a nail-biting finish.

Mullinahone go into the south championship with the pressure of qualifying for the county race lifted. They owed this win to a fierce determination that simply would not accept defeat. Sean Curran was certainly the hero of the side but Eoin Fennelly, Kevin Bolger, Alan Curran, Michael Dunne, Paul Curran, and Kevin Walzer were others who stood up bravely when the pressure was on.

Nenagh must now look to the North championship to secure their place in the county championship, a difficult assignment indeed. The absence of so many key players greatly hampered them and though Tommy Heffernan came on in the second half, he was clearly struggling and lasted only nine minutes. Mikey Heffernan was their key man with twelve points but the lack of support in scoring terms from his colleagues was seriously detrimental to the cause. Daire Quinn, Paddy Murphy, Shane Maher, Philip Hickey, and Noel Moloney were others to work very hard for Eire Og.