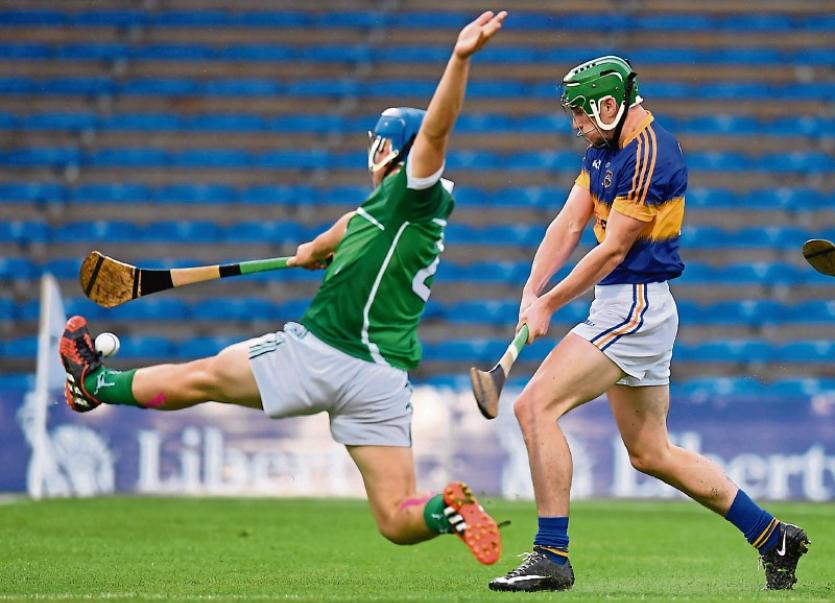 Tipperary hurling teams have often been accused of lacking the stomach for a fight but that's an accusation that couldn't be levelled at the county u-21 side.

They qualified for another Munster Final, the county's third this year, after a terrific struggle at Semple Stadium on Thursday evening of last week, battling ferociously to get the better of a highly-rated Limerick side.

Despite enjoying home advantage they were outsiders for this tie against the All-Ireland champions. They'll be up against it once again when they take on favourites Waterford in the provincial final at Walsh Park next Wednesday evening, July 27 but this win, and the manner of the victory, will pump them with confidence ahead of what will be an even tougher assignment.

With Munster titles already secured by the Seniors and Minors, the U-21s have the opportunity to maintain the successful streak.

Limerick lined out with twelve of the team that beat Wexford in last year's All-Ireland U-21 final, so this win represented a major scalp for a team with one senior player, captain Ronan Maher, and another member of the senior panel in Barry Heffernan.

Limerick looked on course for victory at the halfway stage.They had bossed their opponents in the first 30 minutes with an impressive display of passing, teamwork and movement. Yet despite being the better team in that opening period they led by just a point, 0-8 to 1-4, at the interval after shooting seven wides, compared to Tipp's three.

The second half, however followed a different pattern, as sheer hard work and graft gave Tipperary the edge.

They made their intentions patently clear within three minutes of the restart when Conor Lanigan made a piercing run and unleashed a shot that was goal-bound before Limerick 'keeper Eoghan McNamara diverted it around the post.

They were level a couple of minutes later when Lanigan scored from play and took the lead courtesy of dual star Josh Keane's free two minutes later.

As the game opened up into an engrossing spectacle in front of an attendance of 4,020 on a damp evening in Thurles the sides traded blow for blow. Limerick's Ronan Lynch (from a free) and Barry Nash, when he flicked the ball over the bar, and Tipp's Josh Keane maintained the scores on an even keel but Tipp, gradually, gained the upper hand, after the sides had been level for the seventh and final time with a quarter of an hour remaining.

Ronan Maher had a free role in defence and he swept up an amount of loose ball. He received ample support from man of the match Paul Maher, Tom Fox and David Sweeney.

Andrew Coffey, who fired home a tremendous goal in the first half; Billy McCarthy, Jack Shelly and Josh Keane were also to the forefront of their team's revival.

Nenagh's Barry Heffernan made his return to the county colours from a concussion injury a few months ago. He lined out in an unaccustomed centre forward position, and while he's not a natural forward he worked hard throughout and made a significant contribution.

Their substitutes, especially Jason Ryan and Ronan Teehan, who between them scored 1-3, helped the team raise the tempo in the second half and ultimately their interventions got them across the line.

Ryan restored his team's slender advantage as the game entered the final ten minutes and a minute later Andrew Coffey burst through for another point, as their supporters started to get behind the side.

In the meantime Limerick shot three wides as the semi-final entered the crucial, closing stages, and despite another converted Ronan Lynch free with six minutes remaining they were now noticeably struggling for the first time in the match.

The tension was ratcheted up another few notches when Mark Russell made a mighty catch before pointing, only for Ronan Lynch to score from a '65.

Tipp pressed again and while Stephen Quirke couldn't get a shot away he managed to pass to Jason Ryan, who scored his second point.

Further evidence that the tide had turned against his team came when Limerick's Cian Lynch was penalised for barging, as his team's attacks became edged with desperation.

Two minutes of normal time remained when Tipp crowned a fine second half performance, as substitute Ronan Teehan sent a low shot to the net when a free from goalie Brian Hogan broke in the danger zone.

However the drama didn't end there. As the game entered the first of three minutes of additional time Limerick's Darragh O'Donovan found the net with a stinging drive.

Tipp weren't out of the woods yet but they did enough to hang on for a deserved win. Ronan Teehan raised his team's final white flag of the evening when another Brian Hogan free found its way to him and Limerick had to settle for a point from Ronan Lynch's free, with time almost up.

It took Tipp some time to get to the pace of the game and another slow start in the final could prove disastrous.

A Josh Keane free gave them the lead in the fourth minute but Limerick were ahead within three minutes thanks to a Pat Ryan point and an accurate free from Ronan Lynch. Seamus Flanagan extended the lead before Andrew Coffey and Conor Lanigan, with a neat score from a difficult angle, restored parity.

The rain had fallen steadily since before the start but the sides made light of the conditions on an excellently-prepared if greasy surface.

Limerick were ahead by 0-6 to 0-4 when Tipp struck the first decisive blow of the evening. Their forwards might have been struggling against a tight-marking Limerick rearguard but midfielder Andrew Coffey showed them how it was done when he collected Stephen Quirke's pass and survived a sturdy shoulder from Richie English before steering a low, angled drive past goalie Eoghan McNamara.

Limerick were back in front by the time referee Cathal McAllister blew for half time, thanks to points from Tom Morrissey and Ronan Lynch's free, but Tipp had laid down a marker with Coffey's excellently-executed goal.Limerick's Ronan Lynch, Richie English, Cian Lynch and Darragh O'Donovan contributed to a fine game, although that will be scant consolation to them after they surrendered their Munster and All-Ireland titles.

Twelve months previously in the same grade Tipp lost a game they might have won when the sides met at the same stage of the championship at the Gaelic Grounds, so they'll be hoping that this win will be a springboard for the same sort of success that Limerick enjoyed last year.