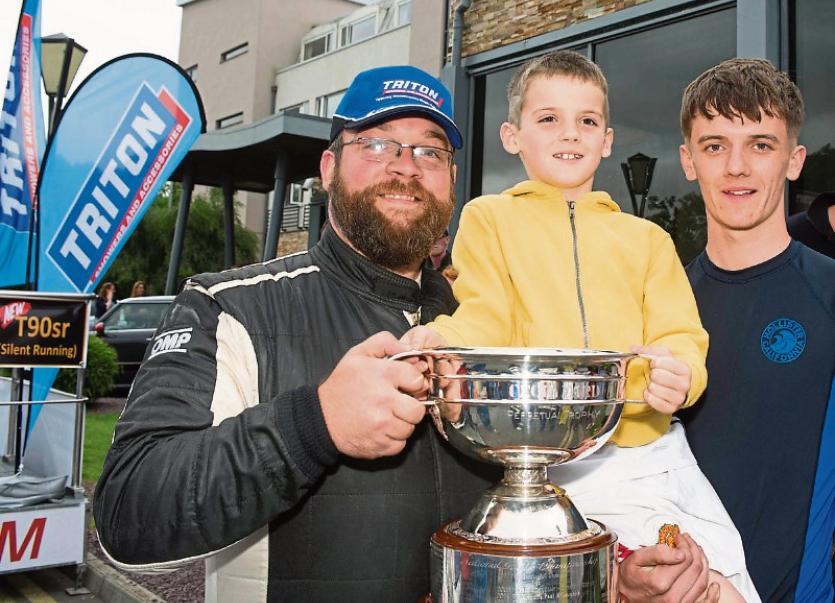 Clonmel’s Roy White and his Cork co-driver James O’Brien duly clinched the Triton Showers National Rally Championship at the Sepam Tipperary Stonethrowers Rally in Clonmel, the sixth round of the series on Sunday last.

Fourth overall and second in terms of the championship registered competitors was sufficient to land the title for White, the third Tipperary driver to become a national champion since the series began in 1978. Previously, Donie Keating (1981 and 1991) and the late Frank Meagher (1986) had tasted National success.

At the Clonmel Park Hotel finish ramp, a delighted White (pictured with sons Colin and Darragh) said - “Once the rally started I really didn’t want to know what I had to do to win. I just wanted to get to the finish, there was no point in adding to the pressure.

“ In the end, I didn’t have to get the twenty-one points that we reckoned were needed prior to the start, nineteen was enough today and I’m thrilled.”

He added, “We have had a great season and one that was very consistent, Tom Gahan prepared a beautiful car for us. It is also a fantastic achievement for James O’Brien (co-driver – to have won all four Irish rally titles) as well, he kept us on the straight and narrow all through. All round, it’s a great team effort and it is extra special to win it here in my home town of Clonmel.”