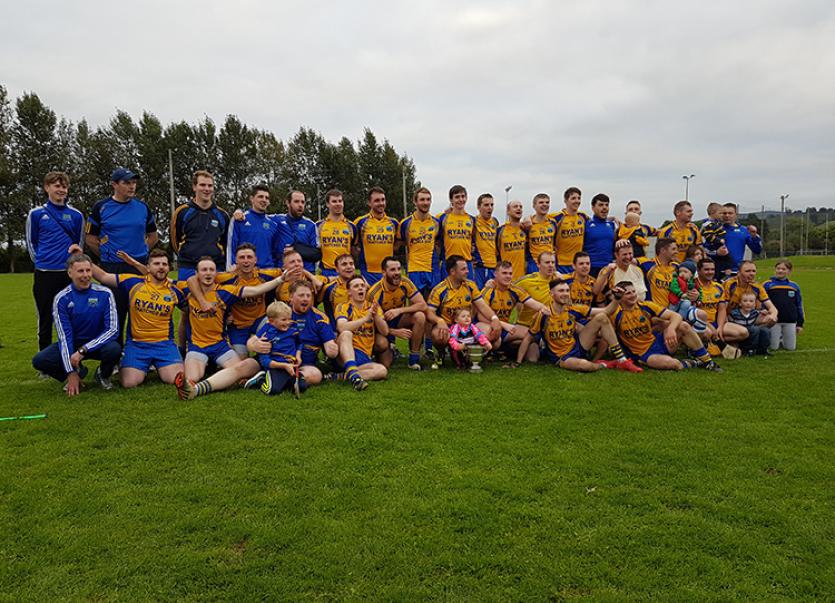 With Marcus Ryan, John Foley, Ger Grace, David Gleeson, Brendan Ryan and man of the match Shane McGrath in terrific form Ballinahinch surged into a double-score interval lead (2-10 to 0-8), but a gritty Newport team fought their way back into this contest.

Conor O’Mahony and Conor Floyd thundered into the game in the second half and with Daniel Carew and Darragh Carroll catching the eye up front Dinny Ryan’s Newport almost reeled their opponents in, but, to their credit, Ballinahinch clung on in a thriller to register a famous win.

Ballinahinch took off like an absolute rocket and led 1-4 to 0-1 as early as the tenth minute. Brendan Ryan set the tone with two excellent right-handed strikes during this period. Ryan played the drift centre-forward role beautifully on Conor O’Mahony and also drilled over a long-range free from well inside his own 65-yard line in the seventh minute. Daniel Carew (free) managed a response for Newport, but Ballinahinch plundered the goal their enterprising play deserved in the tenth when Vincent Kearns grabbed a Shane McGrath delivery, rounded his man and finished off his left.

Newport attempted to confuse the opposition defence with two inside and Eamon McCormack working out the field, but full-back Donnacha McGrath kept the communication lines open and with his forwards working hard Ballinahinch did well to maintain a solid structure.

Newport responded to early setbacks well with Daniel Carew and Peter O’Sullivan landing eye-catching scores before Brendan Ryan responded with a free for Ballinahinch. Carew (free) struck once more before Kevin Mulcahy notched a lovely left-hander in the 18th minute; then came the turn of Shane McGrath to fire over an excellent long-range strike. Then, in the 20th minute, corner-forward David Gleeson propelled Ballinahinch seven clear when he pounced on a break and rifled a left-handed rasper into the roof of the net (2-6 to 0-5). A score of real quality.

Newport responded brilliantly to that setback, however, with points from Odhran Floyd and Daniel Carew (two frees) cutting the deficit to four. Shane McGrath was in no mood to relent and drove his side on from midfield. McGrath was a vital outlet to his side in the middle third of the field, but his driving runs were also having a telling effect. Indeed, McGrath was fouled in the 28th and 30th minutes, both of which were converted by Brendan Ryan. Ballinahinch closed out the half with a solo score from Alan Kelly and another free from Ryan. At the break Ballinahinch led 2-10 to 0-8, but could have enjoyed a more significant advantage, but Newport ‘keeper Mike Flannery to save superbly from the raiding David Gleeson.

Newport are a side of real pedigree and they fought back manfully after the break. Pa Ryan set his side on the way with a point in the 31st minute before Ger Grace fouled Ryan for a penalty in the 33rd - the misfortunate Ryan steered his shot wide.

In the 36th minute Odhran Floyd landed a ’65 (0-10 to 2-10). A Brendan Ryan free settled added to the Ballinahinch tally, but Newport were doing all the hurling now. Eamon McCormack cut the Ballinahinch lead to six before Darragh Carroll swung over a glorious sideline with twenty minutes to play.

David Gleeson hit back for Ballinahinch, but that score failed to discourage a Newport side who turned to Daniel Carew (free), Conor Floyd (’65) and Carew, once more, to leave three between them. Alan Kelly fired over a point for Ballinahinch in the 49th minute, but Newport were growing in confidence. Indeed, Daniel Carew added two frees to their tally before Eamon McCormack belted over what looked like a hugely significant score in the 59th minute (2-13 to 0-18).

It looked as if the Ballinahinch wobble was about to turn into a fully-blown spin, but just then, in the 60th minute, with Daniel Carew taking aim, Ger Grace got back just in time to hook the Newport man; Carew’s shot tailed wide.

Ballinahinch needed leaders and found them in the 61st minute when Shane McGrath played a neat one-two with Kevin Mulcahy, turned onto his right and drilled over a glorious long-range point. There was still time for McGrath to get back and block a Daniel Carew delivery out for a ’65 in the 63rd minute which Conor Floyd converted. Newport desperately tried to conjure one more attack of note, but Ballinahinch survived, just.

Both sides progress to the knock-out stage of the county championship. To be fair Newport probably have trained their attention on the business end of the competition from a long way out, but Ballinahinch, too, should push on following this divisional win. It is worth noting the job Ballinahinch coach Michael Sheehy has done - the transformation of this side suggests that Sheehy, a Ballina man, has a lot to offer. Note this man’s name.