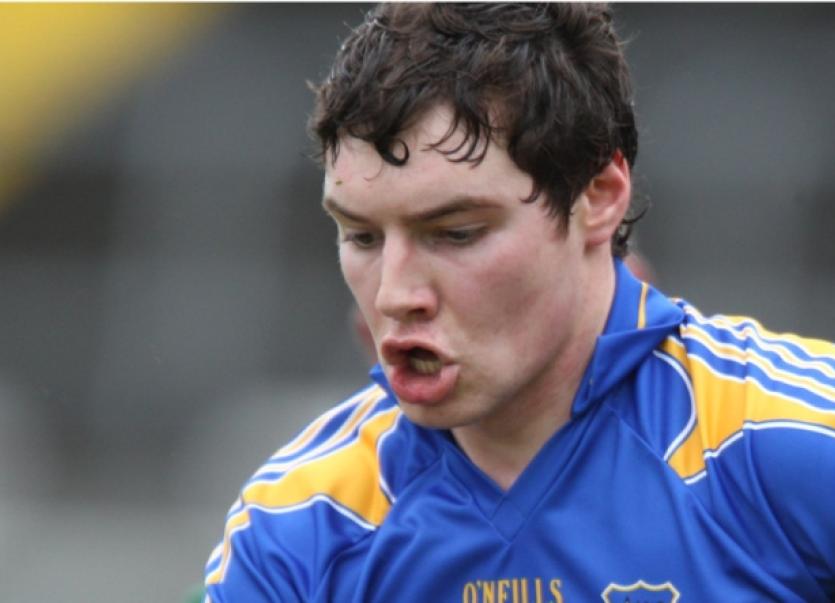 Ciaran McDonald was among the scorers for Aherlow Gaels in their win over Drom/Inch at New Inn last night.

A strong second half performance from Derry Peters’ side, in which they made full use of the strong wind, saw them outscore their opponents by 1-10 to 0-4 to advance.

The  defeat for Drom/Inch brought their senior club season to a shuddering stop in both codes. On Sunday last their fancied hurlers were eliminated in the county quarter-finals by Kildangan, and last night an insufficiently prepared football side came up well short against a seasoned and experienced Aherlow Gaels.

Aherlow had the better of the early exchanges and would have been happy with their 0-4 to 0-2 lead after 20 minutes into the wind. The Grogan brothers, Seamus and Barry were responsible for their first three points with Tom Hanley adding their fourth point after some hard work through the middle. Drom for their part only had two points to show from David Butler and a David Collins free in this period.

Drom got a huge boost though in the 22nd minute when a long free from David Collins was  punched to the net by Seamus Callanan to give his side the lead for the first time; the probable 'Hurler of the Year' bravely beating Ciaran McDonald to the punch.

A converted free apiece saw Drom/Inch go in at the break leading 1-3 to 0-5.

The first half was marked by three black cards. Aherlow's Sean Kiely was sent packing after 20 minutes, while in a five minute spell before the break, both Moloney brothers, Jamie and Emmet, were sent to the line by Derek O'Mahoney.

Drom then flattered to deceive on the resumption with two points inside a minute from Jamie Bergin and David Collins, the latter a superb effort from the left wing by the centre-forward.

Thereafter though Aherlow Gaels had it pretty much their own way and had the three points gap back to parity within six minutes of the resumption.

County stalwart Ciaran McDonald pointed two minutes in and the same player then won a free which was superbly converted from a tight angle by Bernard O'Brien. A nice move finished well by the influential Lar Coskeran made it 0-8 to 1-5 on 36 minutes with the momentum definitely swinging the way of Aherlow.

The introduction of Shane Neville at half-time for Aherlow was a significant move and he had a big part to play in the creation of The Gaels goal when setting up Cathal Dillon to net half-way through the second period. Four points clear now, Aherlow never looked back and further points over the closing minutes from Bernard O'Brien, Lar Coskeran, Mark Russell and finally Tom Hanley wrapped it up.

Drom/Inch who didn't have a single dedicated football training session all year had their last score of the game from substitute Liam Ryan whose goal attempt was excellently diverted over the Gordon Peters.

A fourth black card came in the dying seconds, Bernard O'Brien of Aherlow banished to the sideline.

Aherlow, having failed to come through their group with Moyle Rovers, Drom and Ballyporeen, have now gathered some momentum with recent West wins over Eire Og and Galtee Rovers, and will be further buoyed by this win. They now meet Moyle Rovers once again in the last eight and having beaten them in their group,  will relish another cut at the Monroe based side.