"I'll put that down as the hardest race I've ever done" 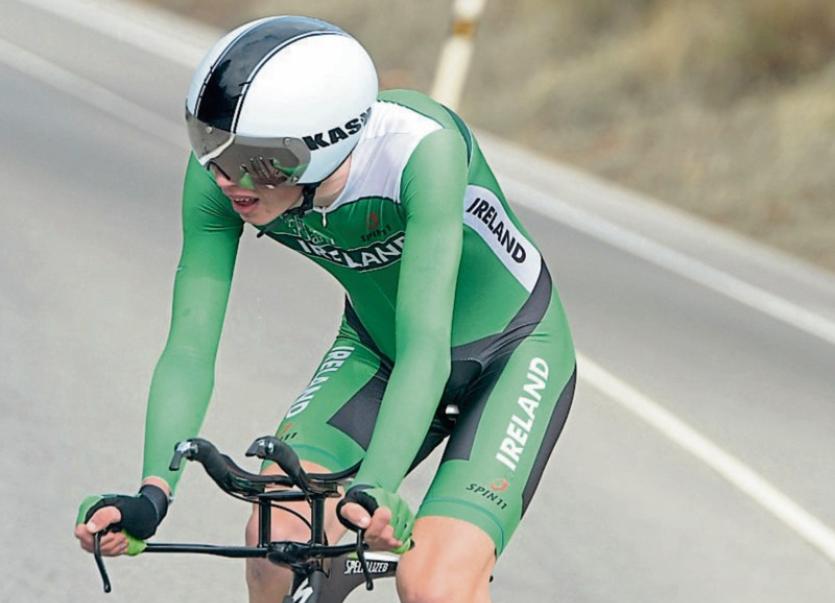 Carrick-on-Suir cyclist Michael O'Loughlin who put in a powerful performance in the World Under 23 Road Race Championships in Doha, Qatar, today.

Carrick-on-Suir's Michael O’Loughlin produced a stellar performance in the Men’s U23 Road Race at the UCI 2016 Road World Cycling Championships in Doha, Qatar on Thursday, leading the race before being reeled in with 10km to go.

The Tipperary talent is in his first year in the U23 ranks and raced as part of a break that stayed clear of the main peloton for the majority of the 166km race in Doha. With 10km to go the peloton caught the break, having gradually been closing the 2.35 second advantage. Eddie Dunbar was the top Irish finisher in 49th place with Daire Feeley in 57th place on the line. Matthew Teggart and Michael O’Loughlin crossed the line together shortly after, in 105th and 106th place. The title was won by Norway’s Kristoffer Halvorsen, with Pascal Ackermann of Germany taking silver and Italy’s Jakub Mareczko winning bronze.

The Irish team rode well together on the flat fast course, inspired by the phenomenal fifth place that Ryan Mullen achieved on Wednesday in the Elite Men’s Time Trial. A breakaway group was established early on in the race, with O’Loughlin attacking across to it towards the end of the second lap of the ten lap course. Over the next two laps the young Team Wiggins rider powered through before gaining contact with the group that would lead the race until the middle of the last lap.

After the race O’Loughlin was upbeat about the race and happy with his performance; “I’ll put that down as the hardest race I’ve done this year. When we were going across to the break, we weren’t sure if we were going to make it, but when Gregory Daniel (USA) from Eddie’s team came across we started talking. We said we’d keep going so we put the head down and went for it. The race didn’t go quite as planned, but we knew that if there was a break one of the team would be in it, it just happened to be me.”

Team Manager Kurt Bogaerts described an impressive performance by O’Loughlin and the rest of the Irish team, pointing out that they are a young team; “All these riders still have a minimum of two years left at this level, they are a young team. It took a big ride for Michael to get to that front group, but he stayed in it ‘til the end. It took a big push by Germany and Norway to bring that break back! The rest of the team rode very well too; we raced how we were planning to race. In general the parcours was not ideal for the team – being flat and hot – but Michael was very strong in the breakaway, and then we had had a plan for Teggart in the sprint. It was all going well for him until he got caught in a crash. The crash is part of cycle racing, but we had a plan and we were able to practise it.”

Having come through the rider pathway with Cycling Ireland, O’Loughlin described the good team morale in the Irish Team saying; “Any time you get to race on the Irish team you would be counting down the hours ‘til you get on the plane heading off. We have great craic, but we are getting on better and better in the races each year. We’ve been racing together for years, back to when we were U14 going on trips together. The development pathway here is good, we keep developing and keep getting stronger. Yesterday we were all sitting watching Ryan’s performance and getting so excited, he’s still one of the lads, even though he’s World Tour, we got such a boost watching him. Hopefully that will be us in a few years.”