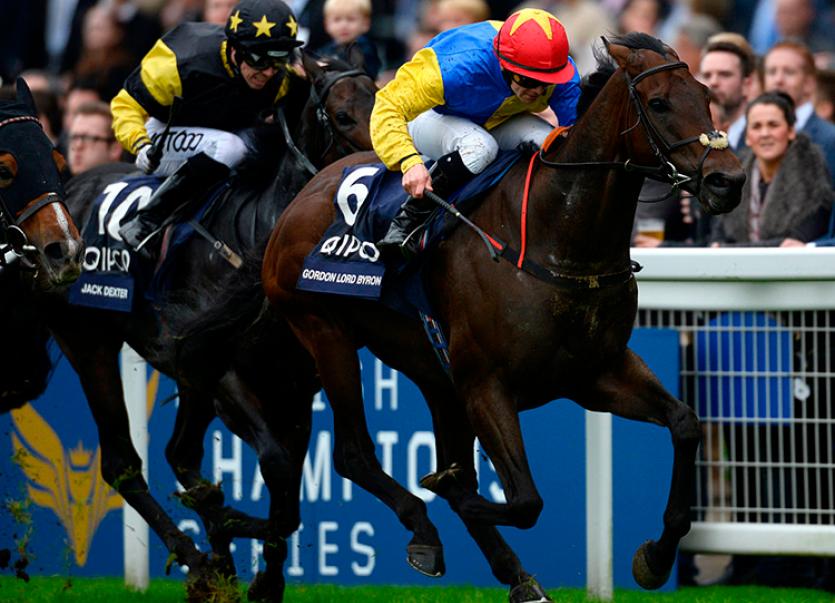 The Nenagh Arts Centre will present a screening of the award-winning documentary ‘Against The Odds - Racing With Gordon Lord Byron’ on Thursday, November 17th at 8pm (tickets are priced at just €5).

The documentary tells the extraordinary story of Gordon Lord Byron, an Irish sprint star who is co-owned by the Cahalan family (Ballingarry, North Tipperary) and Dr Cyrus Poonawalla - the gelding is trained by the Nenagh-based Tom Hogan.

This fascinating tale begins when Jessica Cahalan buys Gordon Lord Byron alongside her father Morgan for €2,000 as a foal. The stated plan is to sell the colt on as a yearling, but when Gordon Lord Byron trots through the Goresbridge sales without turning a head the pair have no option but to break the animal and then ask Tom Hogan, in turn, to train it.

From here the story of Gordon Lord Byron’s extraordinary ascent captures the imagination. Despite being the foal that no one wanted, Gordon Lord Byron rose through the sprinting ranks, conquered his rivals and changed the lives of everyone associated with him. Indeed, Gordon Lord Byron recovered from a life-threatening injury (fractured his pelvis during his very first outing) to compete on four different continents and win among Group 1 company in England (2013 Haydock's Sprint Cup), France (2012 Prix de la Foret) and Australia (2016 George Ryder Stakes at Rosehill). He is truly the horse who won against all the odds.

The 75-minute documentary has been produced by Nicholas Ryan-Purcell (Cloughjordan) in association with Tom Rudd. Nicholas, who studied television production at Ballyfermot College in Dublin (graduated 2012), has poured all of his heart into the project and has already collected two awards in Hollywood for his trouble.

There are a number of highlights to this piece of work (notably the comic timing and able story telling of Morgan Cahalan), but chief among them is the insight that this story will give you into racehorses.

What few racing fans, and especially punters, understand about racehorses is that they win because they want to. Breeding has a hand to play, but the good ones find that something extra. And, people who have never sat on a horse will never understand that - put two horses together and given even half a chance the pair will race. Gordon Lord Byron is a competitor; he won because he wanted to.

The documentary will screen at the Nenagh Arts Centre on Thursday, November 17th and for just €5 you will learn so much about the Irish people’s enduring and intoxicating fascination with horses and, more so, you will learn to appreciate that all the breeding in the world can mean very little with a race on the line. For tickets please visit the Nenagh Arts Centre box office in Banba Square, call 067 34400 or alternatively book online by logging on to nenagharts.com.