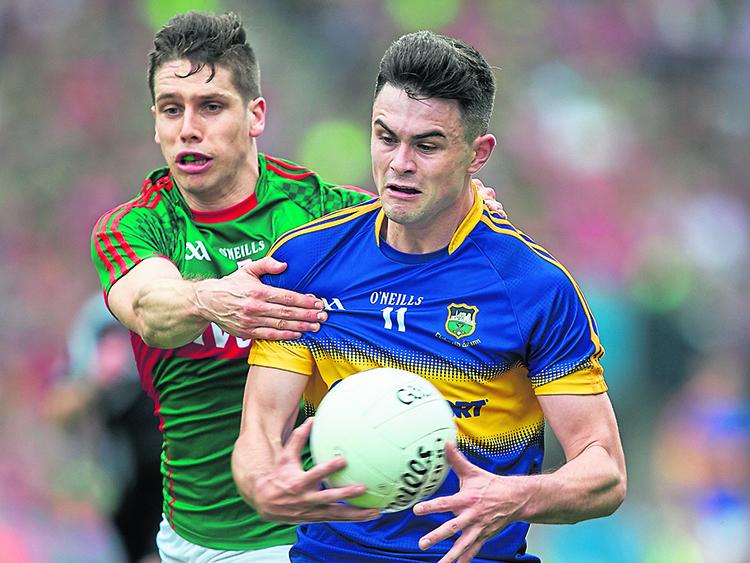 Clonmel Commercials’ Michael Quinlivan has been named on the 2016 GAA-GPA Opel All Star team - the 23-year-old teacher is just the second Tipperary man ever to be selected for such a prestigious annual award.

Michael Quinlivan has been rewarded for a series of stunning performances during the inter-county football championship which helped to propel Tipperary toward the All-Ireland semi-finals. Quinlivan was nominated for an All Star award alongside teammates Evan Comerford (Kilsheelan-Kilcash), Robbie Kiely (Carbery Rangers, Cork), Peter Acheson (Moyle Rovers) and Conor Sweeney (Ballyporeen).

If anyone needed reminding of how far Tipperary football has travelled in recent years they were provided with a telling yard stick when five of Liam Kearns’ senior outfit were nominated for GAA-GPA Opel All Star awards while Jimmy Feehan (Killenaule) and Josh Keane (Golden-Kilfeacle) have both been shortlisted as young footballer of the year candidates alongside Mayo’s Diarmuid O’Connor.

The player of the year and young player of year awards are voted upon by the members of the GPA while the All Star selection is chosen by a panel of journalists, media personalities and pundits. Both will be revealed on Friday night (RTÉ One from 7pm).

Just eight counties, all of which made it as far as the All-Ireland quarter-finals, were represented among the 45 All Star nominations - unsurprisingly Dublin and Mayo led the nominations with 11 each. Brian Fenton (Dublin), Ciarán Kilkenny (Dublin) and Mayo’s Lee Keegan have been nominated for the footballer of the year award.

Uachtarán CLG Aogán Ó Fearghail chaired the selection committee meeting and congratulated the 2016 winners: “Gaelic football and hurling are team sports - but the GAA-GPA All Stars offer us a chance to recognise and honour the warrior spirit of the players who, through their individual brilliance, helped ignite our season. Enjoying a proud history that stretches back to 1971, the All Stars award scheme continues to occupy a special place in the hearts and minds of the GAA public and I want to warmly congratulate the chosen players and know that it will be a massive honour for not only them and their families, but also for the Clubs who started them out on the road to being inter county heroes and now GAA GPA All Stars. I also want to thank Opel for their continuing support”.

Dessie Farrell, Gaelic Players Association Chief Executive, added: "As always the annual selection of the All Star teams will be a source of great debate over the winter, but the announcement of the first All Star 15 is an appropriate time to celebrate the contribution of all county players during a dramatic 2016 season. Thanks to the selection panel of journalists from the print and broadcast media who had the difficult task of picking the final 15. Good luck to the 45 hurling nominees tomorrow night and we look forward to seeing who will be unveiled as players of the year and young players of the year. Thanks to Aogán Ó Fearghaíl and the GAA and GPA teams who helped organise this year's awards scheme and to our long-time supporters, Dave Sheeran and Opel Ireland for their outstanding sponsorship of the GAA-GPA All Stars".

The hurling selection will be announced live on Friday, November 4th when the Convention Centre in Dublin will host the 46th edition of the All Star awards. The ceremony, which will be broadcast live on RTÉ One from 7pm, will honour the best Gaelic footballers and hurlers in Ireland while the player of the year and young player of the year award winners will also be announced for both codes on the night. RTÉ’s Michael Lyster and Joanne Cantwell will present the live broadcast.

Since the All Star scheme was inaugurated in 1971 Tipperary have won 89 awards - Kilkenny lead the field on 179 awards with Cork second on 105 and Tipp third.

The entire Tipperary All-Ireland winning team has been nominated for a 2016 GAA-GPA Opel All-Star hurling award - the Premier County players dominate the shortlist (45 players). Waterford earned nine nominees, Kilkenny eight, Galway six, Clare two and Wexford two while Cork and Limerick had one player nominated. In 2010, when Tipperary last won an All-Ireland title, the county earned 14 nominations. Indeed, never before has an entire team been nominated for the prestigious honour.

These individual awards are voted on exclusively by the playing body (GPA members) while the All Star selection is chosen by a panel of sports journalists, media personalities and pundits.

Prior to the development of the All Star awards scheme the Cú Chulainn awards, run under the auspices of Gaelic Weekly magazine, ran from 1963 to 1967. During that period Tipperary won 26 awards.