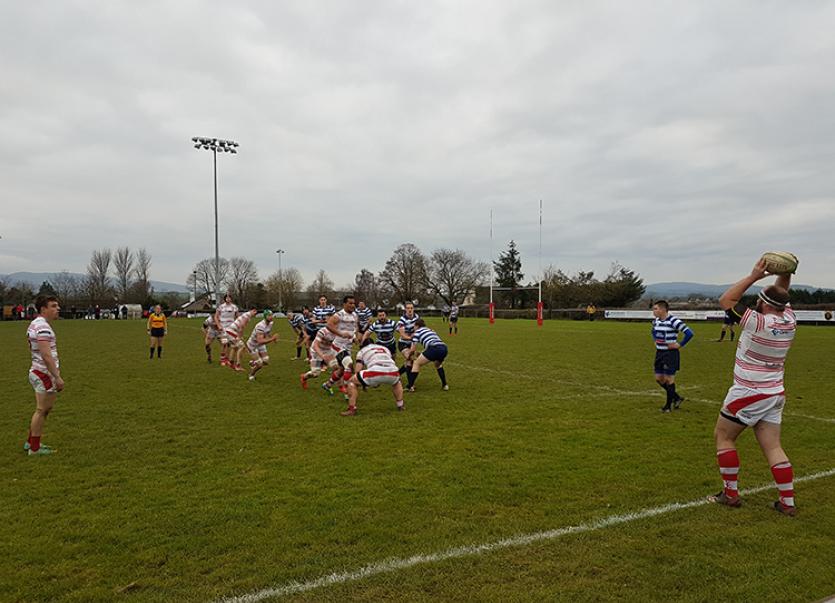 Nenagh Ormond pictured in action against Blackrock College on Saturday.

A bonus-point win over the famed Blackrock College on Saturday afternoon at New Ormond Park propelled an impressive Nenagh Ormond team to the summit of division 2A in the Ulster Bank League. And, it proved to be a more than encouraging afternoon for Tipperary rugby when news filtered through that Cashel RFC had also got the better of Queen’s University (24-22).

Nenagh Ormond find themselves top of division 2A with nine games played thanks to a really impressive first half showing against Blackrock College. Indeed, Nenagh streaked to a 22-0 interval lead with Willie O’Connor, Clayton Stewart and Conor Muldoon shining out while Lemeki Vaipulu was in absolute beast mode.

The Ormond lads were denied a try as early as the seventh minute when Derek Corcoran’s touch down in the corner was deemed a knock-on. Nenagh shook off what appeared a harsh decision two minutes later when Kevin O’Flaherty instructed Clayton Stewart to boot a penalty into the corner. O’Flaherty called the resultant lineout on himself and seconds later Lemeki Vaipulu barged over for the opening try of the game.

Blackrock shipped the first of two yellow cards in the 18th minute and three minutes later the sinbinning of that second row cost ‘Rock dearly when Nenagh Ormond pushed the visitors off their own put-in deep inside their ’22. Derek Corcoran flashed the ball out and Clayton Stewart scooted in. Stewart added the extras and Nenagh led 12-0.

In the 31st minute a distressed Blackrock pack failed to defend another Ormond scrum inside their ’22; the ball was recycled after a series of phases before Clayton Stewart swung a pass out to Darragh Hassey on the wing. Hassey had a bit to do to haul in the looping pass, but athletically did so and plunged over in the corner.

In first half injury time Nenagh struck for the bonus point try when a solid Ormond scrum on the left flank preceded a flowing move which featured two contributions from Clayton Stewart on the loop before Michael Walsh finished that stylish move.

Blackrock College responded well to the situation they found themselves in and mauled over for a rousing try four minutes into the second half. Three minutes later Clayton Stewart booted over an Ormond penalty in response, but with outside-centre Billy Ngawini looking a lively option in midfield Nenagh needed to be on their toes in a defensive sense. Indeed, Ngawini sparked the move which saw Blackrock notch a second try in the 66th minute (25-10).

Clayton Stewart conjured a special moment in the 73rd minute when the New Zealander won a turnover inside the Nenagh half. In a sensational show of ingenuity Stewart chipped over the advancing Blackrock line, collected the ball once more and raced the length of the field to score as good an individual try as you are likely to see.

Blackrock College scored a late, late consolation try which was converted to leave 15 between them.

Considering Blackrock College’s second half rally it will be interesting to see how the contest plays out when the sides meet in the return fixture following the Christmas break on Saturday, January 17th. It was also interesting note that Saturday’s Ulster Bank League clash was refereed by former Ireland women’s captain and Six Nations grand slam winner Joy Neville who won 70 caps for her country over a distinguished 11-year international career.

The above video features some of the key moments from Saturday’s game: Derek Corcoran’s disallowed try, Lemeki Vaipulu in full beast mode, Darragh Hassey’s terrific finish, a flowing move which culminated with a Michael Walsh touchdown and a penalty booted over by New Zealander Clayton Stewart.